Space Academy, or how to smile real big in a scary kind of way…

In my quest to dig up all the crap from my childhood that I loved so much I’ve run into a bunch of people and sites that have opened my eyes to an overlap in nostalgia between the 1970’s and 80’s. For the most part my nostalgia tends cover a lot of stuff that falls between 1977 and 1989, as those were the first 12 years of my life, pre-pubescence in all it’s goofy glory. Well I sort of have a link to the previous generation’s childhood pop culture junk via my sister who was born in ’69, and just as we’re going though this boom of 80’s re-hashes and re-launches today, in the 90’s there were a ton of 70’s references that bombarded me throughout high school. Basically, at best, there was a weak link to the 70’s that I’ve sort of been interested in but never really took the time to investigate, like the Sid and Marty Croft stuff, some of the weird Hanna Barbera cartoon stuff.

Well thanks to BCI Eclipse, I’ve been able to begin investigating the wonderful world of pre-Masters of the Universe Filmation when they were producing live action television as well as cartoons. One area in particular that’s struck my fancy is the television fantasy/sci-fi boom in the mid to late 70’s, of which Filmation was a big part. I was already a fan of the more mainstream super hero shows like the Incredible Hulk, the Spiderman TV series, the Linda Carter Wonder Woman show, as well as Buck Rogers, but I completely missed out on stuff like Battlestar Galatica, Space 1999, and the slew of Filmation shows like Ark II, The Secret of Isis, Jason of Star Command and Space Academy.

I recently sat down and took a look at Space Academy, the second show in Filmation’s space series after Ark II, but before it’s spin-off Jason of Space Command. 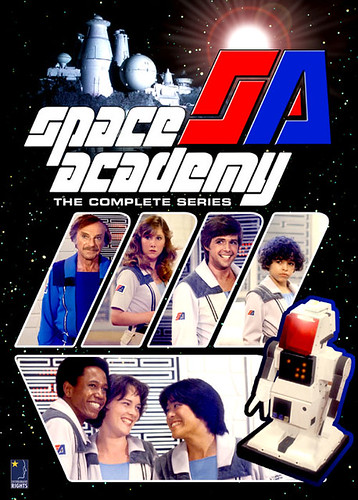 Though I’d never seen this show before, it was immediately familiar in both tone and style, not to mention for Johnathan Harris’ overly dramatic mug. The show stars Harris (of Lost in Space fame) as Commander Gampu of the titular Space Academy, surrounded by a very ethnically diverse cast of young actors including Ric Carrott as Chris Gentry, Pamelyn Ferdin as Laura Gentry (Chris’ psyonically connected twin sister), Maggie Cooper as Adrian, Brian Tochi (voice of Leonardo in the three live action TMNT movies as well as Toshiro Takashi from the Revenge of the Nerds movies and Cadet Nogata from the Police Academy Movies) as Tee Gar, Ty Henderson as Paul, and Eric Greene as the blue haired (well black haired with a slight blue dusting) Loki, an orphan picked up in the first episode from a desolate planet that is about to explode. The other character that rounded out the show was Peepo, voiced by Erika Scheimer, daughter of Lou Scheimer (who helped found Filmation and was executive producer on most of it’s shows.)

The show ran for 15 episodes on Saturday mornings in 1977 and follows the adventures of the space cadets and their Commander as they seek out and explore space from their academy space station via their Seeker space ships (which is actually the recycled Ark II craft, and would later be used on Jason of Star Command, a loose spin-off of Space Academy.) Though the show is fairly dated in terms of wardrobe and hairstyles (they certainly didn’t take a cue from Star Trek in this) it’s immensely enjoyable in it’s kid level Star Trek homages and campy light hearted-ness. One of the shows strengths is it’s decent effects work with a mixture of really good shots (like a Seeker coming in for a landing in a docking bay) and some not so great ones, but all of it is almost on par with shows like Star Trek and Space 1999.

It’s hard not to smile at the bad jokes and overly dramatic lines, which make it easy to look past the implausible plots and psuedo-scientific occurrences. Watching Chris and Laura psychically conversing or when Loki uses his infrared vision to spot particles of meteor dusk on the body of a seeker has a very campy charm. The only thing that really stood and kind of bugged me was the bile inducing amount of smiling the kids did. It’s almost to a point where you can read a 1984-esque environment of fear into the acting style (you almost expect some of the characters to bust out with a line like, "Keep smiling or Gampu will kill us with his death ray.") It’s the perfect Saturday morning trash though, that is a stepping-stone to the more adult shows like Battlestar Galatica or Dr. Who, and at the end of the day is a perfect example of a very important part in nostalgia, which is that there are some things that are meant only for kids, and that can be very important. You see that type of mentality in things like Lunchables that come with Pop Rocks-esque fizzy toppings, or commercials for Apple Jacks, sometimes things don’t need to be anything more than they appear, they don’t need to make sense, they just need to be cool for kids.

Shows like this are also a great example of something a child can use as a basis for kick starting their imagination. That’s something that’s lost on children’s television and it’s inevitable merchandising today. I truly think that this is a lost art in that by not going into large amounts of researched detail it forces a kid to fill in the gaps of logic (sort of like Donnie Darko for kids, but with less disturbing and much more scientific uncertainty), which is something that low budget or highly logic jumping shows tend to invoke.

At the end of the day, though the show is flawed, it is mindless fun (maybe too much because of it’s datedness) and that’s about all I want out of a Saturday morning TV show anyway.  I will say that’s sparked an interest in finding out what Jason of Star Command (which centers on a special ops-like extension of Space Academy) is like.

There’s nothing more frustrating that playing hide and seek with a deaf wolf.

Diving back into Soda Pop Culture for a bit…