Well I’ll be the father of a Ghost Buster! 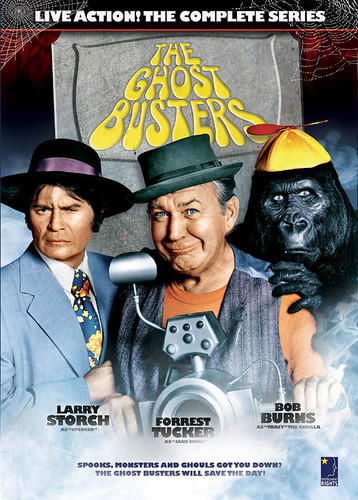 To bookend the release of Filmation’s Original Ghostbusters cartoon from a few weeks ago, BCI Eclipse has slated the release of the original live action Ghost Busters series for April 17th, 2007. The series starred Larry Storch, Forrest Tucker, and Bob Burns (as Tracy the Gorilla) playing three paranormal investigators who face off against phantoms, vampires, werewolves, the Frankenstein monster, mobsters, Vikings, and magicians, while taking their orders from the mysterious agent Zero.

The set will contain all 15 episodes of the series, which originally ran on CBS Saturday mornings in 1975, and will include plenty of Andy Mangels special features like a cast and crew documentary, behind the scenes footage, as well as a bonus episode of the later cartoon series,"I’ll be a son of a Ghost Buster". It’s retailing for $29.98, though you can preorder it from outlets such as Amazon.com for around $26. Actually a quick note about the Amazon listing, they have all the plot and cast & crew information incorrectly listed as that for the Real Ghostbusters cartoon instead of the Filmation live action show, so ignore the Arsenio Hall mention.

Halloween Mask Madness, Day 11: I am not an animal, I am a human being…