It’s a whole new month and I’m back to a more theme-less Peel Here. This week I thought I’d dip back into 1979 and share a bunch of Buck Rogers in the 25th Century stickers. I have a bunch of vague memories of watching this show from when I was about three or four, but for the life of me I don’t recall all that much about the plot besides what the tag line on the DVD set says. I remember a cool looking hawk guy, Erin Gray (mostly because of her stint in Silver Spoons), and Twiki the annoying robot saying stuff like "B-b-b-but B-b-b-buck!" and "Deebee deebee deebee" (which, even though it was annoying, it was done by Mel Blanc, so I have to give it some credit.)

When I looked the show upon IMDB, the whole subplot of Buck hooking up with the Draconians, Princess Ardala, and the whole conspiracy to have Buck lead them to Earth was a complete mystery to me, so maybe I didn’t watch the show as much as I thought. In fact, when I tracked these stickers down and took a good look at what I had, I really didn’t remember most of what was pictured, and I think it’s because they’re scenes from this plot. One of these days I plan on renting these DVDs from Netflix as buying the set is out of the question. I have a hard enough time paying $25 for a nostalgia DVD set, let alone the $75 price tag that the set is listed at.

I guess for right now I’ll just have to be happy with the stickers themselves. First up we have four packages of somewhat miss-colored puffy stickers (called Puffy Stick-A-Toons), which were manufactured by the Imperial Toy Corporation in 1979. Most of these images were stripped from a single piece of promotional (or production) art that we’ll get to in a minute. Now, all my memories of Twiki have him as silver, though both here and on the original production painting he’s painted gold with a silver faceplate. I know that there was a pilot movie for the series that I think aired separately, and when I flipped though some fan sites I saw Twiki as both silver and pale gold, so I’m not sure but maybe he was gold for the movie and silver for the series. 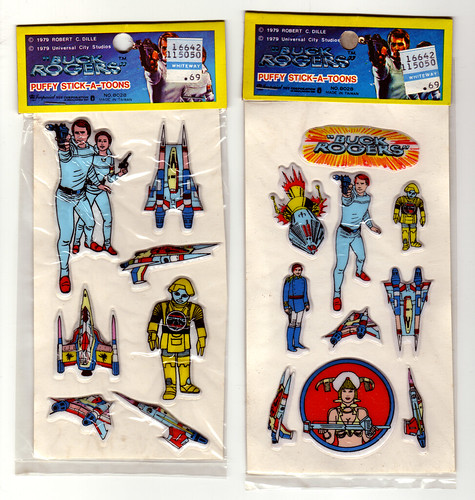 The space fighters look pretty hideous here though, all multi colored with miss matched pairings of baby blue and pink flesh. Like a lot of puffy sticker series most of the stickers are offered in multiple sizes through out the different packages, so that’s kid of cool. I was always a fan of multiple stickers so that I could keep some in a photo album and stick the rest elsewhere. I also think it’s kind of cool that they’ve supplied space fighter stickers in practically every angle imaginable. 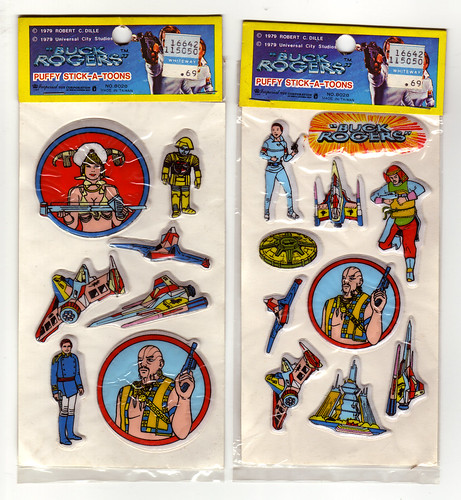 Now for the second part of today’s Buck Rogers fest, I present the entire 1979 Topps sticker card set and both card-back puzzles. These stickers showcase some of the more 70’s-esque styling that Topps was employing such as weird die-cuts on the cards and simple background drawings, I assume to make the card collecting more exciting. They did much the same thing with the Mork and Mindy set, though those had a field of stars in the background that might have been a little better suited with this set. 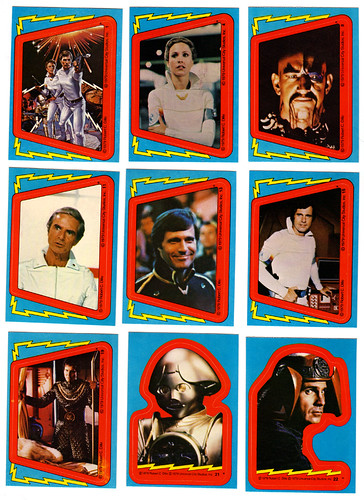 There were 22 sticker cards in this sub-set of the regular series of cards, which is a pretty common number for Topps as they’re fond of having the subsets be a multiple of 11. I think it’s kind of weird though, that only two of the stickers are in the more traditional "die-cut with heavy border around the character" form, as that type was pretty much the standard for Topps all throughout the 70’s on up until the 90’s. 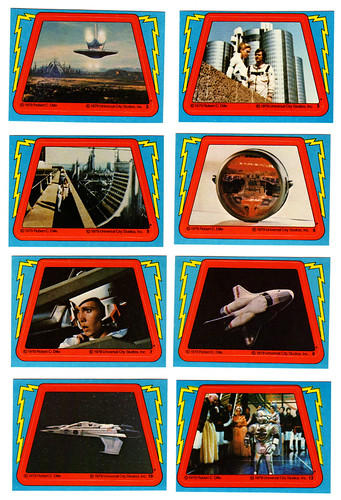 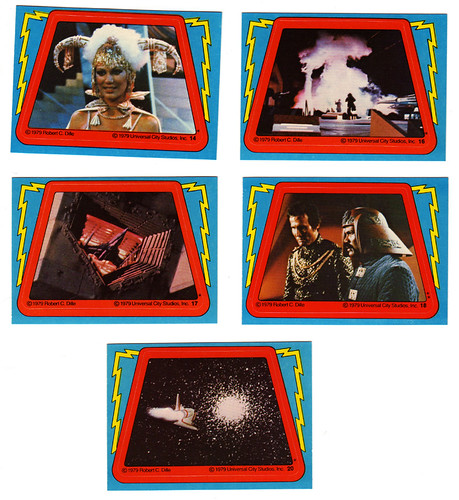 There were two puzzles with this set, and there were no duplicate card backs, so by completing the sticker sub-set you had just enough for both puzzles, and one of each of these "How your completed puzzle should look" card backs. 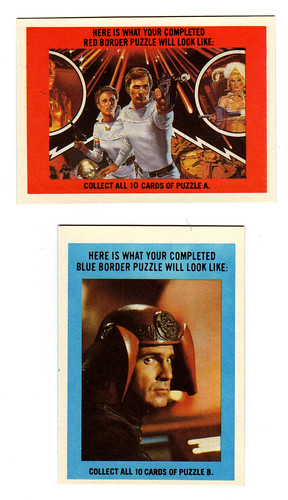 Puzzle A, the red-bordered puzzle, is my favorite being a nice blow-up of a piece of promotional/production art from the series. Most of the merchandising, video, and DVD covers have used this art in one form or another, not to mention the puffy stickers above.  I kind of wich Topps had gone with a larger puzzle instead of breaking it into two because I know that there is a lot more to this artwork. 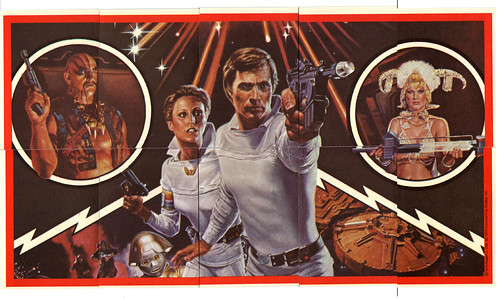 The B puzzle, which was blue bordered, was a little bit less on the cool side. Featuring Buck in a ridiculous Draconian (I’m assuming) helmet, it’s a lot less stellar that the A puzzle. 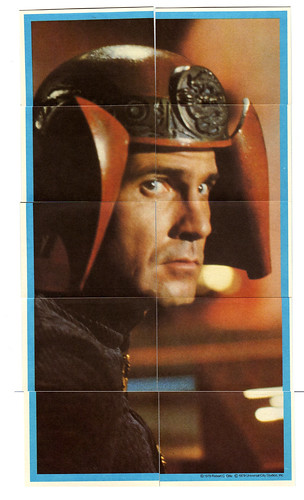 Next week on Peel Here, "Sweep the leg, Johnny!"

Exclusivity Vs. Fandom, or Why it Sucks to be a Collector These Days *UPDATED*