Here we are back for the second installment of Peel Here for this last week in March. CJ over at Life in a Northern Town graciously sent in a couple scans of some of the stickers she’s had tucked away for years, so I thought I’d take a minute to share them with everyone else out there in internet land. Tying in to this month’s Scratch & Sniff theme, these stickers are of the smelly variety and were produced by a company called CTP (Creative Teaching Press), which markets products aimed at the teaching profession and still makes stickers to this day (though I didn’t see any sniff stickers.) As far as Scratch & Sniff stickers go, I think CTP was surely one of the big three (including Trend and Mello Smello), and were most likely to be found and collected off of school homework and tests. I’m not sure if CTP had storefronts (like ABC School Supply warehouses sometimes do) or if they distributed their stickers through other chain stores like Hallmark or American Greetings, but I’d place my bets on school papers.

Anyway, here are the stickers. In this scan you can see a few varieties including Blueberry, Coconut, Fruit Punch, Spearmint, Vanilla, and Candy Apple. 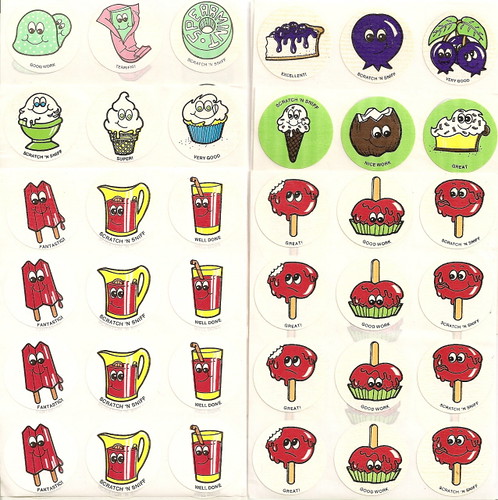 What I dig about these stickers, over say Trend for example, is that each scent came in at lest three different styles, many of which were in variations of either cake/pie, ice cream, fruit, Popsicle bars, drinks, candy, or in some more rare cases, monsters and a weirdly long haired hippy looking lady (um, seriously, I’m getting to those.) The images are mostly anthropomorphic, though not quite as creepy as the Trend sticker designs, at least in my opinion.

After CJ sent the scans in I got the bug and managed to track down a bunch more CTP examples, so here you go…

Okay, seriously, what’s up with these banana stickers? Do I really need to see a peeled banana in his boxers? This is a perfect example of what I find creepy about anthropomorphic imagery, I mean I don’t think I would have associated a banana with eyes as having a penis if it weren’t for the polka dotted boxers and his sly covered smile. Now to me the banana just seems like a pervert begging kids everywhere to scratch his crotch to see if it truly smells like a ‘naner. CREEPY. I am, though, digging the hell out of Senior Banana on the end there…

This strip of stickers is kind of interesting. I’m glad they worked in a Double Bubble-esque individually wrapped piece of gum drawing, though the one of the machine looking down as it’s bubblegum brains come shooting out of it’s mouth is kind of weird.

Okay this grape strip just bummed me out. Why did the designers feel the need to draw a grape Popsicle with a bite taken out, which is obviously painful due to the very sad expression on the Popsicle’s anthro-face? Jeez. Good work my grape-flavored ass.

Has anyone in the history of the world seen a more depressed whip of red licorice in their lives? I mean, freaking hell, were teachers trying to reward kids or get them used to the idea of cutting their arms for attention?

Unlike grape, this lime Popsicle must be masochistic or something because it sure looks darn happy that it’s no longer whole.

For some reason I think Mr. Orange Moustache needs a bowler cap.

Not to keep picking on the CTP artists and stuff, but that last sticker on the strip makes me want to vomit. I can’t keep from trying to mingle the smells of dill pickle and sun tan lotion in my brain now.

On the one hand I really like how the artists differentiated between the male, female, and children pineapples in these stickers, but on the other it’s kind of disturbing to think that in order for pineapples to reproduce, they have to cut off their spiny skin and slice themselves into rings. I suppose this falls on the creepy side of anthro-fruit.  Well, I guess the male pineapple looking up into his own opened fruit-skull to get a glimpse of his liquified fruit-brains is sort of weird too.

Everyone laughs at Deputy Sarsaparilla’s high badge wearing ways, but one day they’ll all be sorry when he grows a glass arm, grabs a gun and shoots them all.

Dude, that one strawberry looks all weary of the other one. Never trust an over enthusiastic strawberry.

So like I mentioned earlier, these stickers also came in the same scents, but with much trippier imagery like monsters and longhaired hippy chicks. I’m not sure if these came out around the same time, like 1981 or so, or if they were released sometime in the late 70’s (which would be my best guess.)

Is it just me, or does the grass at the feet of the purple two-headed monster look like its shooting me the double bird?

Why is there a hidden 13 under that yellow monster? Why do I keep asking these pointless questions?

Now that’s what I’m talking about, gingerbread man making a move on long-haired hippy-dippy chick, and lefty getting scared as GB-man starts screaming "Don’t you f***ing eat me!"

Oh, I get it now; fluffy monster is wearing a 13 T-shirt. Stupid me.  It’s heartening to know that the artists cared enough to know that he likes wearing that 13 shirt often.

Well this ends our month long excursion into the wondrously wonderful world of Scratch & Sniff stickers. In the annals of vintage sticker history, in the section on the 70’s and 80’s, you’re sure to see that Scratch & Sniffs reigned supreme and were coveted like no other. When you get right down to it, the technology is truly amazing considering that some of these stickers are around 30 years old and though I didn’t scratch, I could still sniff some of their fruity (or sometimes fried chicken-y) goodness. What else can hold a scent for 30 years? I mean it’s just paper and glue.

Anyway, I have no freaking idea what sticker fun I’m going to bust out with next week, but rest assured, it’ll be fun (sound of crickets chirping.) Thanks again to CJ for both sharing some sticker scans and prompting this extra post on CTP sniffys. Until next time, stay stuck.