Here’s another quick bit of comic book ad fun from 1976 in which we see three kids diggin’ on the U.S. Bicentennial with some sweet patriotic t-shirt swag. What struck me first was that the ad featured a pre Diff’rent Strokes Todd Bridges who is enthusiastically modeling that sweet rocket launch design T-Shirt.

Were kids really buying into all that Bicentennial hype? I mean, my parents screwed me by at least a year and nine months as far as the festivities of ’76 go, so I obviously have no memories of proudly sporting a shirt with a weird redesign of the famous "Raising the Flag on Iwo Jima" image, which replaces the soldiers with what appears to be some kids, a nurse, a police officer and some dude in an orange leisure suit. I will say that, that girl is so into dudes that are all about the Bicentennial. The founding fathers had no idea what effect their efforts would have on that particular dudes sex…er, love life. 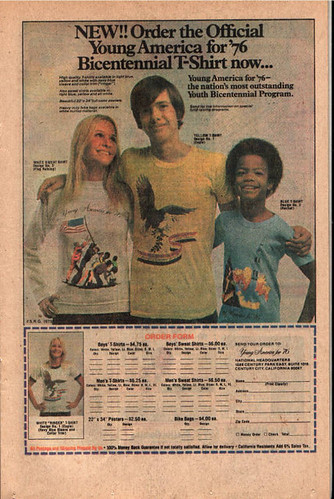 There! Evil PURE and SIMPLE by way of the 8th dimension!