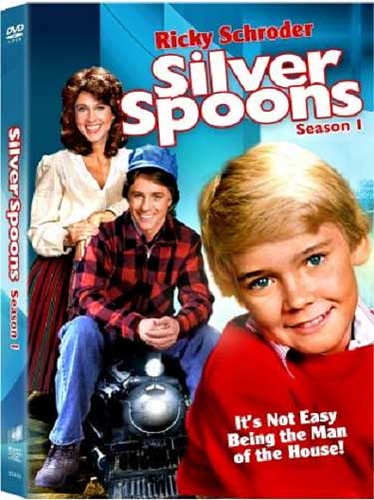 2007 is going to be a swell year for catalog titles being released on DVD I think. I mean we’re only 3 months in and so far we’ve had a slew of 80’s DVDs either announced or released like Night of the Comet, Solarbabies, Harry and the Hendersons, The Monster Squad, Family Ties, CHiPs, Bosom Buddies, The Fall Guy, and now Silver Spoons! It’s like dominos falling, and I hope it just keeps going like this.

Silver Spoons was the quintessential sitcom for me while I was growing up. Between the great cast, all the toys, the duck phone, and the slew of awesome guest appearances, this show was always a favorite and rounded out a fun triumvirate of shows (including Punky Brewster and Dif’rent Strokes) with children as the main characters. It’s slated for release tentatively on June 19th from Sony, and will contain all 22 first season episodes. This comes via TV Shows on DVD.com.

Outside of a bunch of cartoons, the list TV that I would love to see released on DVD is ever growing smaller. Pretty much what I’d like to see are shows like Out of this World, Small Wonder, The Wonder Years, The Love Boat, Valerie/The Hogan Family, Street Hawk, Welcome Back Kotter, The Great Space Coaster, Pinwheel, Perfect Strangers, Monsters, Tales From the Darkside, and the Tracey Ullman Show get some love now. I know there was a TV Favorites Best of disc of Welcome Back Kotter released, but I’d still like to see at least the first season considered for release.

The most powerful cake pans in the universe!