I don’t remember if I’ve given it a shout on the blog before, but on the left list of links you’ll see a one for Read-Along Adventures, an awesome site dedicated to those wonderful children’s book & record sets from the 60’s, 70’s and 80’s.

I’ve mentioned a couple of these sets before, namely Planet of the Hoojibs, which was an early chapter in the Star Wars extended universe (before there even was an EU in fact.) I had stumbled upon a site, Check the Cool Wax, which is graciously sharing nice MP3 files of the record portion of this set as well as a bunch of other titles.

Well at Read-Along Adventures these book and record sets are being shared in a most unique fashion, one that mimics best the experience of sets. The books and audio files have been arranged into a Flash file where you can flip through the book at will, and with each page, the corresponding audio file will play. The sound file will wait to start until you load the next page as well, so this is the best virtual experience for reading along to a record.

The site was just updated with two Star Wars classics, the afore mentioned Hoojibs, as well as The Ewoks made for TV movie adaptation of The Caravan of Courage. These join the ranks of some great read-alongs, among which are The Goonies, all three Indiana Jones sets, E.T. (in two separate editions, one read by Drew Barrymore and one by Michael Jackson which is pure insanity), not to mention the original Star Wars trilogy and Willow. Anyway, you can check out the list of titles available (Here for Flash users) and (Here for non-Flash users.) 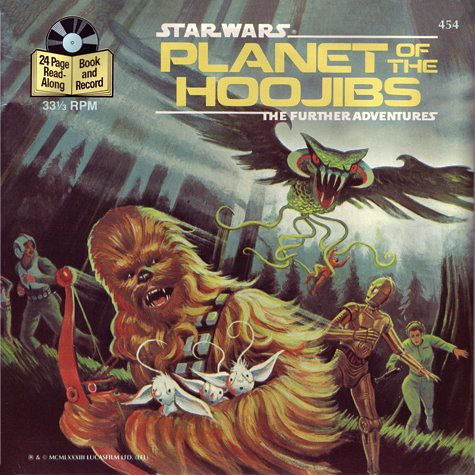 I can’t wait for The Ewoks join the Fight, as that was another one of my favorite record books sets.

Why am I’s covered in goo…?