As promised in the Twinkie entry, though a week late, here is Vol. 2 in the Essential Hostess Ads series, this time centering on the Hostess Cupcakes and the DC heroes who love to use them for fighting crime and stuff.

I don’t know what it is about cupcakes, but it brought out some of the lesser-known DC heroes, at least from my perception as I never really read DC comics and I’d wager a bet that most people wouldn’t recognize characters like Red Tornado and possibly even Hawkman, though he did get his own US postage stamp so what do I know. I also think it’s kind of funny that Batman shows up three times in these ads, and I know there must be more since I found twice as many for Twinkies (so there are possibly even more starring the dark knight); so all in all Bruce Wayne is a cupcake man at heart, which is nice.

What have I learned from reading these ads? Why those cupcakes are dark, rich and creamed (not creamy.) So without any further to-do, let’s get into those creamed cakes. 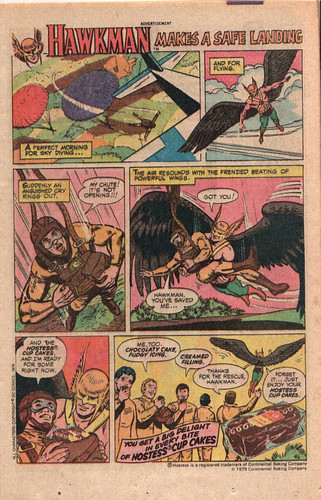 Okay, so we’re running out of the gate with a bang on this one. The cupcakes are so secondary to the plot here, in fact the entire plot is so…well for lack of a better idea, it’s just so much like a normal ad. Why does Hawkman even need to be in this ad? I mean the dude might as well have been able to open his chute at the last second and it would have been just as effective. I’m probably reading way too much into this considering he’s a fictional character with his back turned and all, but Hawkman just seems pissed that he had to take a break in his normal lazy afternoon soaring to catch that dweb and his damn Hostess cupcakes…

1980 Batman in Catman on the Prowl 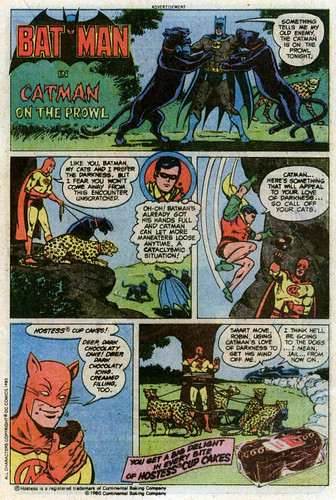 This 1980 ad is sort of misleading, as it’s really a Robin story at heart. Robin, who through his love of his mentor and friend sacrifices his bagged lunch dessert, gets stiffed by the “big name” in the title. What a shame. Seriously though, what’s up with this first panel? Where the hell does Batman find the strength to hold up two man-eating panthers by the throats? I guess this is no worse than that shark attack scene in the Adam West Batman movie. “Robin, hand me the Bat-Shark-Repellant!” 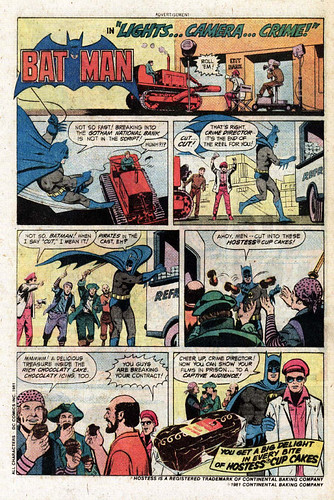 Oh geez. I hope the artists and writers of this comic thought ahead enough to have their credits listed as Alan Smithee. Why pirates? Why not a giant cutting machine or some dude with a chainsaw or something. Pirates should have been in one of the Twinkie ads, I mean Golden cake and all…

1981 Batman in Hearts of Darkness 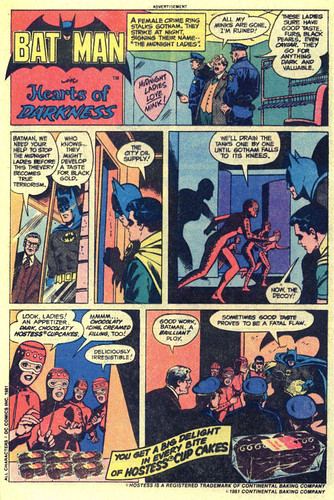 You know, Batman’s last line in this ad is probably strangely prophetic, “Sometimes good taste is a fatal flaw.” I’m sure all the great ad copywriters were thinking the same thing when their pitches for amazingly well written Hostess ads were passed over for the dregs like this one. Tell me, how in the hell do you fence a city’s oil supply? 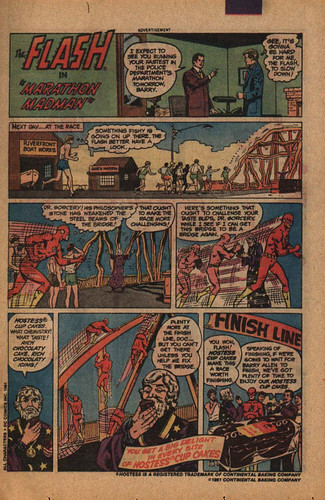 Jesus, what in the hell is Dr. Sorcery’s plan here? Does he hate competition running so much that he felt the need to use a magical stone on a bridge to stop a race? Maybe his entry was refused and this is his payback. Either way I think it’s kind of cool that the writer at least worked in both the Flash’s secret identity and job, not to mention joking around with his powers. I actually think this is probably the most well written Hostess ad so far, and that depresses me. 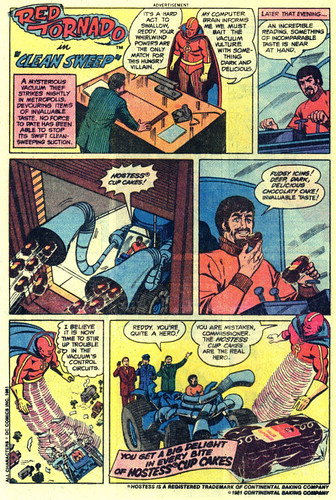 Seriously Red Tornado, take the damn credit for foiling this cantankerous cupcake caper my friend. What the hell did a Hostess cupcake ever do for you besides get you cast in an ad so your comic could get more exposure? My computer brain is telling me you’re a feeb, though a feeb with incredibly fast moving legs and a vast knowledge of criminal’s invaluable tastes.

I still have one more volume of Essential DC Hostess ads to explore, so this time next week we’ll be taking a gander at Vol. 3, Fruit Pies. I think I might even have some Marvel ads to throw in as well.

I’m going on The Quest!

Peel Here #46, a sticky Halloween anyone?