The Cannonball Run was one of those flicks I saw constantly on TV growing up in the 80’s.  I think it was a law that all UHF or like Fox had to play it on the weekends at least once a month or something; this and flicks like Red Dawn or the Outsiders. 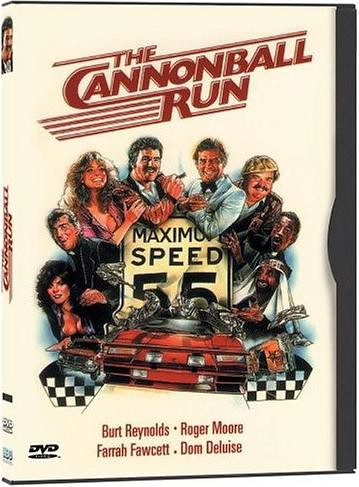 For me, this is the prime example of the type of flick that I’d buy in a heartbeat when I see it in the $5.50 bin at Wal-Mart, something that I know I’ll watch at least once a year and just has a bunch of fun nostalgia memories to it.  Though while I just showed it to a friend recently and was sort of disappointed by it (we watched this directly after Smokey and the Bandit which is a much tighter film, though it’s the same principal creators and actor), I’d have to say this when I was a kid this was my favorite "grown up" movie.  There’s just something magical about the duo of Dom DeLuise and Burt Reynolds, between the appearances of "Him" and the relentless self-mockery of Reynolds, it’s just gold to me.

Add to this Adrienne Barbeau’s "Barbeaus" clad in tight purple Lycra, the Black Lamborghini, Jackie Chan, a silly cameo by Peter Fonda, the amazingly drunk and on-his-death-bed Dean Martin, and some really funny lines from the crazy Jack Elam as Dr. Nikolas Van Helsing and this is a comedy smörgåsbord.  Unfortunately it is pretty choppy in terms of editing and flow (the cannonballers don’t even start the race until like 50 minutes in) there is a lot to love.

If nothing else this flick was a labor of love for the writer, Brock Yates, and the Director Hal Needham (who organized and participated in the actual Cannonball Run race) which weird gives a little bit of credit to an otherwise insanely over the top madcap romp.  In fact a lot of the background actors and most of the vehicles used were from the real race including the ambulance and the Ferrari.  It’s also one of five or so pairings Needham had with Reynolds in the 70’s and 80’s including Smokey and the Bandit I+II, Hooper, Stroker Ace, and the Cannonball Run sequel.