Well as of this installment of Peel Here I’m officially a fourth of the way through what I have set out to share sticker-wise. I have a rough estimate of about 52 columns total, and around 1500 stickers to share, out of which I’ve shared 388. I also received my first bit of reader/listener sticker collection sharing, so hopefully this will last for a bit. On the one hand, it seems like a lot to share and enough so that it’ll be a nice place to catch up on a bunch of sticker nostalgia. On the other, and even though 1500 stickers is a lot, it’s only a dent in what was the insane sticker craze of the 80’s.

Anyway, as promised this week, and for the whole month of March, I’ll be dedicating Peel Here to the topic of Scratch and Sniff stickers. Whether you know them as sniff, sniffy, stinky, smelly, scratch ‘n’ sniff, scratch & sniff, scent, or scented these stickers were undeniably a part of most kids lives in the 70’s and 80’s. Practically every company producing stickers had a line or two, and there were ever a few companies who dealt almost exclusively in the form, Trend, CTP, and Mello Smello off the top of my head. There were licensed stickers like Mr. T, Kool-Aid, E.T., and Garfield, as well as generic or company specific images, of which Trend is probably the popular and prolific. There were even puffy scratch & sniff stickers which was like a 1980 girl’s wet dream come true.

The popularity of these stickers was so pervasive that the idea spread to many other products other than stickers. There were many toys including, two scented Masters of the Universe figures, Stinkor and Moss Man, both of which rounded out my sense memories for that toy line, not to mention a whole line of Strawberry Shortcake figures. There was even a series of scratch and sniff children’s books (I had a Popeye one that I’ve been trying to find for years to no avail), scented crayons, pens, pencils and erasers.

For today’s vintage sticker collectors Scratch & Sniff’s are probably some of the most rare, not to mention expensive, stickers because of they’re very self destructive form. Not only is it a sticker, which means that at least half of all those made were used as just that, but in order to get to the sweet scent you had to (obviously) scratch the sticker which left most of them, after time, faded, ripped or scentless. As with most collections, the most pristine examples are the sought after items and on today’s secondary sticker market (i.e. eBay) whole sheets or mint in package sheets can fetch upwards of $30-$45. That’s like $1.50 to $4 for one quarter-sized sticker, and that, my friends, is insane.

For the majority of the next four Peel Here columns I’m going to focus on the most popular brand of scratch & sniff stickers, Trend, because they’re the ones that I remember the most and were the easiest to obtain. There were around 104 original scents, though I’ve only managed to track down about half of those.  Of the ones I did find, most are in they’re original packaging which is where they’re going to stay because I’d like to re-sell them, so I haven’t gotten a chance to find out what they smell like.  Also, on a semi-related note, I’d like to direct you to Bubble Dog’s awesome sticker collection because, well, it’s awesome and much more complete than mine could ever hope to be, at least scratch and sniff-wise.

I think, like most kids, I was first introduced to the concept of scratch & sniff stickers in elementary school when we started getting graded on tests and homework. For a good grade (I’m not sure whether we were on the more simple A, B, C, D, F or still on the more conceptual Great, Good, Needs Improvement) you’d get a sticker with a small note from the teacher. You knew you were kicking some scholastic ass when you got a scratch and sniff sticker though, and as I mentioned on my recent podcast, it has been forever cemented in my brain that the idea of doing a good job must be connected with intense scents.  Weird but true.

So for this column, I’m going to share some of what I think are the weirder stickers, with either weird scents or odd pictures to go with these scents. First up we have my favorite sniff sticker ever, gasoline. I suppose at the end of the day there has to be at least one person who loves every scent imaginable, and though I would place the scent of gasoline in the "weird" category, I love it. Actually now that I think about it, with Nascar and tractor pulls there are probably a lot of closet gas huffers out there. 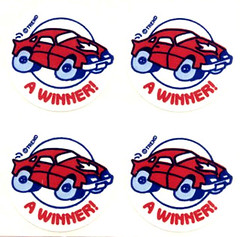 The sister sticker to gasoline is probably this following sticker that smelled like motor oil. I wasn’t as fond of this scent, but I really dig the sweet chopper in the picture. These two stickers are also probably the best examples of "boys" scratch & sniff as well, though I’m sure there are a lot of Nascar-mommas out there who would beg to differ. 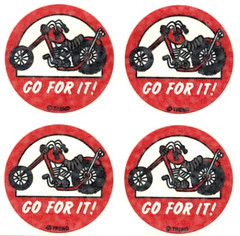 Another odd scent, and one that I’ve never had the opportunity to sniff was this band-aid sticker. Though I can imagine how it would smell, faintly like vinyl with a touch of medicinal gauze, it’s an odd example of the types of scents Trend Enterprises was shooting for. I guess these were great for doctor’s offices, though I never got one, not even after I jumped off a chair and cracked my head open on the edge of a coffee table while screaming out super hero names.  Nope.  Poor me. 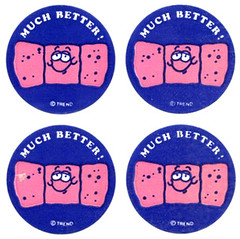 Also in the weird scent department is this crab-scented sticker. Now I’m not even sure what crab smells like other than fishy, because the taste of crab is one of those flavors that doesn’t seem to rely on the scent as much as say an orange. In fact even the taste is a little bit of a mystery to me as I typically eat crab in other things or smothered in butter or soy sauce, so I really can’t imagine what this sticker smelled like. Besides, who wants to smell a crab, I mean outside of getting stereotypically sexually gross here, when does this come up as a great opportunity. 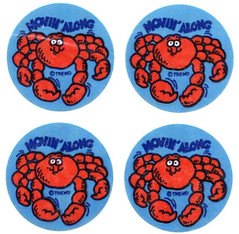 Here’s another example of one of those weird scents that was directly up my alley, soap. I loved this sticker and it was the pride of my scratch & sniff collection growing up, though I think there were extenuating circumstances for this. Besides liking the fresh and clean scent, this was one of the only Trend stickers that I actually managed to get an entire sheet of from the local Hallmark store. What was funny was that while I was in the store I was seriously jonesing for all the Trend stickers, but my Mom limited me to two packages so I grabbed the soap and jellybean scented packages. I was so happy until I got home and realized that I didn’t have a thing to do with 12 of each sticker. It was then that I realized that it was way cooler to get one on a test then to cheat and buy them. 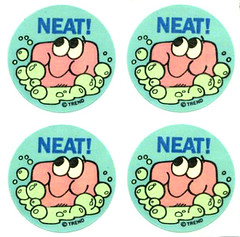 This following example is pretty straightforward but I felt it deserved to be in the weird category. I remember this skunk sticker smelling exactly like my Stinkor action figure and for whatever reason, have for years been under the impression that neither smelled like an actual skunk. That was until about two months ago when I was driving in north Georgia and I whisked past a dead skunk of the road. The intake was open on my air conditioner and it immediately filled the car with Stinkor smell. I guess it was pretty darn accurate. 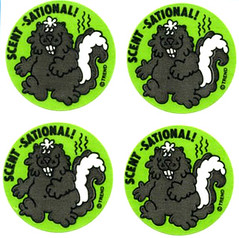 Okay, rope is just a dumb sticker and scent. I think I would even prefer a picture of a cat hanging off a rope that smelled like cat pee,than something so boring for a "Hang in There" sticker. 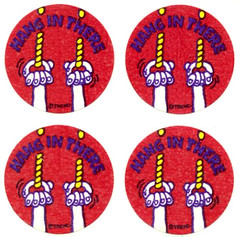 So what exactly does a phone smell like? I mean besides plastic? 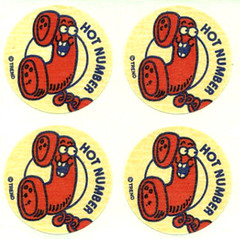 Okay, here’s an example of one of those WTF stickers. It’s a singing record album that smells like licorice. Yup. They managed to release a phone sticker that smells like a phone, but they couldn’t replicate the smell of vinyl? Or were they having problems deciding on a mascot for licorice? I suppose they were playing off of the licorice wheel candies that sort of looked like records, and I do believe I’ve heard the term licorice pizza as a reference to records, but still this sticker is just plain silly. It looks like a record album so it should smell like Gene Simmons. 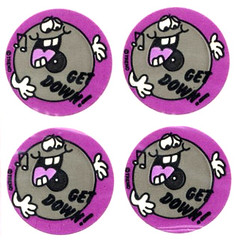 Another complete falsehood is the following cherry scented clown sticker. Now we all know that clowns don’t smell like cherries, but instead failure and death. And shock and fear. And crying, pants pooping, and most importantly grease, as in way too much grease paint for one living person to sport under hot lights. In fact it should smell like hell, because lets face it, clowns are scary. Well except for Bozo, but the Grand Prize Game goes a long way to making him more palatable.

By the way, on a side note and as a little bit of insider info into my personality, if I’d had the chance to play and win the Grand Prize Game as a kid I think I would have just shot myself right afterwards because it would have the culmination of one of my favorite dreams. Six buckets, six ping pong balls, a whole mess of 80’s toy prizes up to and including a picture with Bozo from his patented spectra vision Polaroid camera (was that it?), a crisp $100 bill, a new bike and a superb cake from what ever local Chicago bakery Bozo used to pimp for. Anyway… 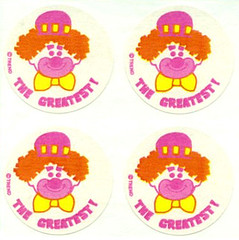 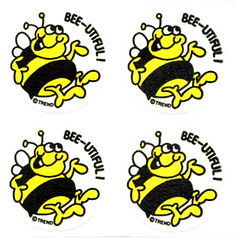 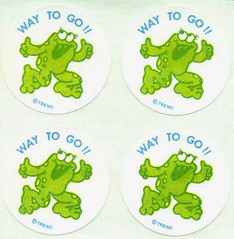 These last two stickers fall into the esoteric range of scents that are relegated to astronauts and leprechauns. Okay, so what the hell does Space Smell like? Apparently, robots. Space smells like robots. Cute ones that look like they could have been stand-in’s for Timer on Time for Timer. Yup, Neal Armstrong would agree, space smells like cute robots. 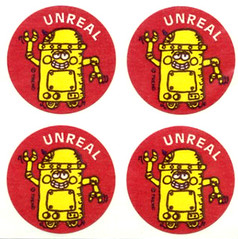 This second esoteric scented sticker apparently smells like rainbows. Now I’m assuming that what this sticker actually smells like is that weird "fresh & clean" smell of laundry detergent, but only Lucky would know, and he’s hording that information just like he does with his damn marshmallows. 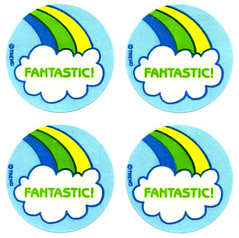 It’s hard to believe that we’d get Bacon, Egg, & Cheese flavored Combos before something a little more normal like Ranch…