Recently, Savage over at his fun blog Old Man Musings posted an old Hostess Fruit Pies ad starring the Fantastic Four wherein the Four with Franklin in tow, pound and fire-blast the shit out of some falling rocks that are threatening the quintet’s lunch of luscious fruit pies. It was some sweet ass and quite extreme fruit pie rescuing I’ll tell you what.

Well, while I was sifting through some crap comic bins at a local used book store looking for some 80’s comic ads to write about I found a ton of the DC versions of these old ads, so I decided to share some of them. I’m not sure, there’s probably a booming web-ring dedicated to these ads, but I’m too lazy to look and see, so if this is redundant, too bad.

This week we’ll take a look at a myriad of ads dealing with the use of Twinkies as weapons of mass destruction, gifts of intergalactic well being, and the last sweet taste a bunch of crooks get before the bitterness of the upcoming horrors they’re sure to receive in jail. So without further ado, I present the Essential Hostess Ads Vol. 1: Twinkies.  Remember, you can click on the comics to enbiggen them for much better viewing…

1978 Batman vs. the Intergalactic Gold Eaters 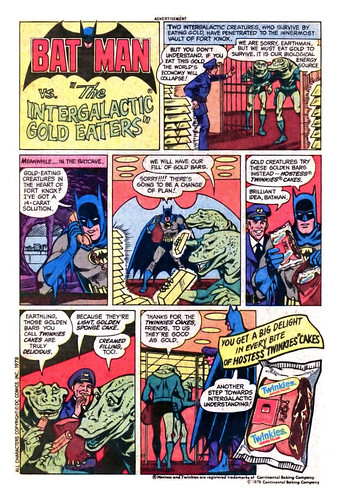 I bet you didn’t know that Bruce Wayne’s keen sense of logic in crisis situations once led him to using a bag full of Twinkies as a weapon against intergalactic terror.

I know if I were a bipedal alligator-shaped alien that sustained itself with pure gold, I would gladly accept a pack of Twinkies instead. You know it was the scrumptious cream filling that kept them from eating that security guard and beating Batman senseless with his own bag of Twinkies. 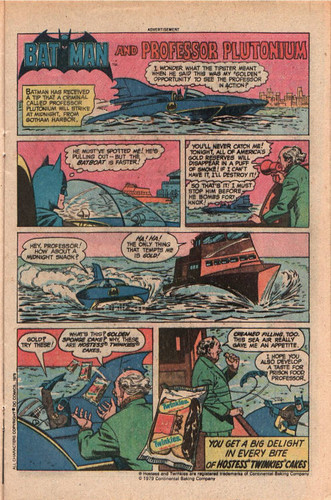 It does make me wonder though, when just a year later our favorite caped crusader thwarted a hell-bent-on-blowing-up-Fort-Knox Professor Plutonium with yet another bag full of Twinkies, why the hell does Wayne keep a bag full of Twinkies with him? Is it to lure in unsuspecting new sidekicks with the succulent cream filling, or does he really just think there is no difference between gold and golden fried cakes full of creamy goodness?

1979 Green Lantern vs. Triclops, three-eyed Keeper of the Cave 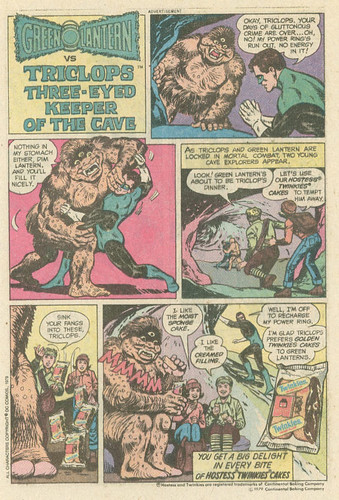 At least Green Lantern isn’t Twinkies obsessed in this curious ad from 1979. Though you’ve got to wonder if those few packages of Twinkies would satiate Mr. Triclops, I mean he was bound and determined to have a three-course meal of Hal Jordan. I’m thinking that was his shrewd attempt to get those kids alone as they’d put up less of a fight. Way to go protecting the kids Jordan… 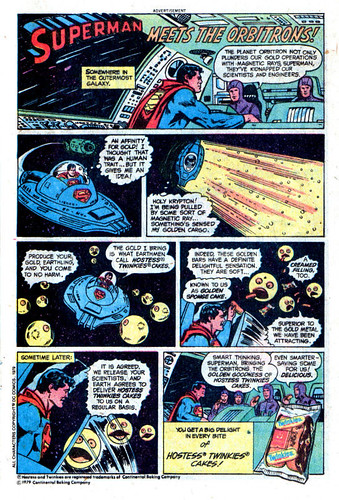 Clark Kent must be taking lessons from Batman, as on a strange mission into the “outermost galaxies? he brought a butt load of Twinkies, either on a hunch that every villain in the universe was trolling for gold that year, or that he too is in the market for a hot young Twinkie obsessed stud for a sidekick. I bet you didn’t know that Superman is cleared to negotiate distribution contracts on Hostess’ behalf did you? Just another tool in the arsenal against intergalactic crime I suppose.

1980 Batgirl in A Matter of Good Taste 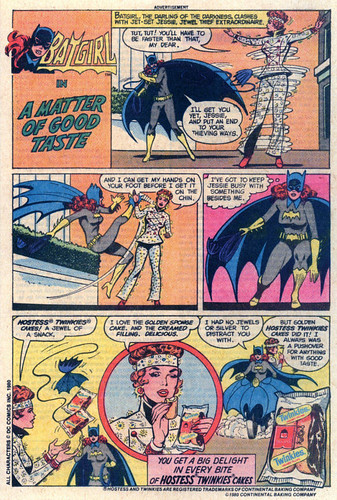 By 1980, Batgirl had learned a thing or two from her mentor when she distracts Jessie, jewel thief extraordinaire, with a well-placed bat-a-rang full of moist spongy cream filled goodness, even after Jessie managed to side step taking it on the chin. Okay that’s enough double entendres…

1980 Batman vs. the League of Assassins 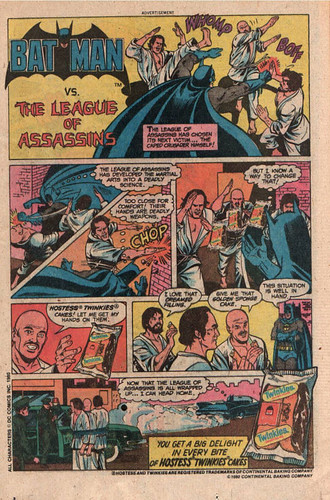 Okay, this is just getting ridiculous. What self-respecting assassin would choose to eat a Twinkie instead of killing batman with it? I mean it clearly states on page 231 of the Assassin’s Handbook, that any bakery item with a creamy center is a perfect substitute for killing a man if there are no other weapons around. Sheesh. 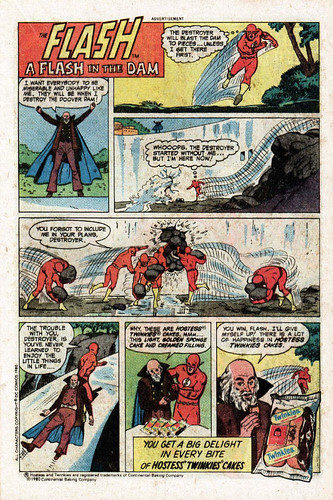 So whatever copyboy they had writing these Hostess ads in the early 80’s didn’t even try and work Twinkies into the plot of this one page masterpiece. Flash has already taken care of business by the time he starts shilling for Twinkie the Kid and company. I would have at least had the Destroyer try and turn the dam into gold or something vaguely in theme with the other ads. This is just sloppy. SLOPPY COPY BOY, SLOPPY!

1980 Green Lantern in The Bobsled Run 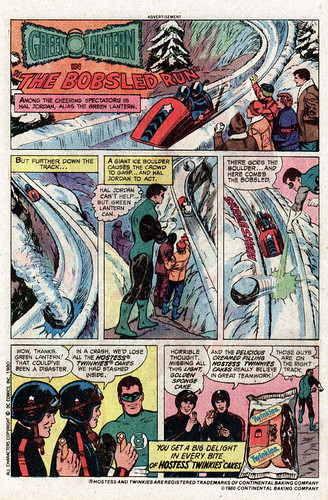 Holy Hell these are getting bad. Does Jordan really refer to himself in the third person in inner monologues? I’ve never really read any DC comics. And what’s this shit about Twinkies believing in teamwork? Twinkies don’t believe in anything.  Couldn’t the writers have at least tried to tie this into the fact that there are two cakes in every pack of Twinkies? I’d also really like to know what two bobsledders in skintight bodysuits are doing waist-deep in a sled full of Twinkies. Scratch that, I just answered that question with the astounding power of my limitless imagination. Gooey.

1980 Wonder Woman in the Borrower 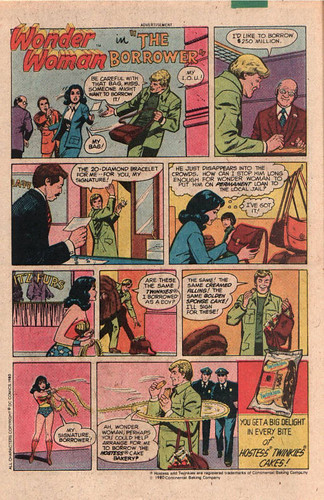 So let me get this straight, if I wanted to even look at what 250 million dollars looks like all I have to do is go into a bank and ask? And how exactly did he just blend into the crowd with two tons of cash? The only thing that would save this comic for me is if the Borrower borrowed Diana’s eagle-crested top so I could borrow a glimpse of, aw, never mind. You get the point. 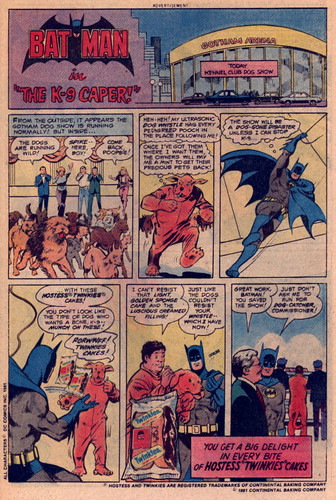 1981 Plastic Man in Gold for Dessert 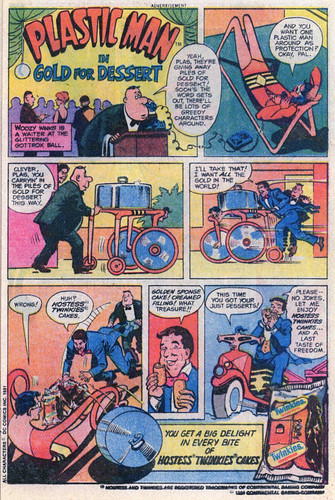 Jesus Plas, just let the dumbass have some Twinkies for crying out loud, they were free and everything. Is there a law against being greedy? Fascist!  Hell the way I see it, the more Twinkies that flunky steals the more that dinning hall has to order, and that equals more scratch for Plastic Man man. Jeez, think these things out man.

1981 Superman in Gold Mine Rescue 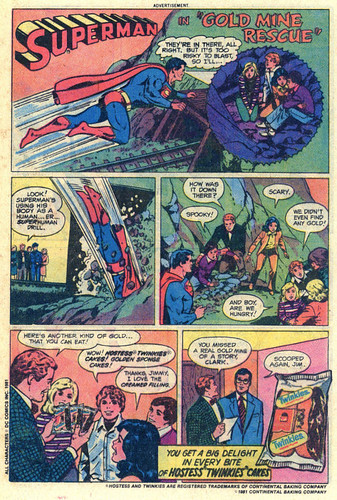 Could you imagine how bad the Goonies flick would have been if all of a sudden Superman had crashed down into the well while Mouth was expounding on his lost wishes and dreams just to give all the kids some Twinkies and set them on their way? I bet that’s what would have happened if Richard Donner tried to film two Goonies films back to back like he did with Superman, and I’d bet he would have been fired off that production too.

I’ll be honest, I hold no ill will toward Donner; I’m just running out of witty things to write about these damned Twinkie ads. Maybe Supes should have drilled his way in, and then in a pissed off huff, thrown Twinkies at all the kids while yelling, “Here’s your damn gold kids! I could be saving starving kids or something with my Twinkie goodness, but NOOOO, I had to save your greedy asses…? 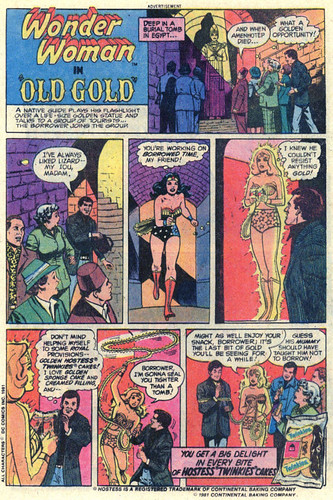 I saved the biggest WTF ad for last. Okay, let me get this straight. The Borrower flew all the way to Egypt to steal some old hag’s purse? And then Wonder Woman pulled a Goldfinger on him just to hand him some Twinkies? Seriously, wtf is going on is this strip?  And who had the privilege of slapping on the gold paint, hmmm?

I do think it’s interesting that they bothered to re-use a previous villain from the other Wonder Woman strip. Was he a character in the main book I wonder?

Next week I’ll continue this little foray into the world of Hostess comics, when I delve into the Essential DC Hostess Ads Vol. 2: Cupcakes.