For this week’s edition of Peel Here I’ve decided to bust out my collection of Mork & Mindy stickers from 1978. I’m pretty sure that Mork & Mindy is the first show that I remember actively watching as a kid and it’s the first thing that comes to mind when ever I see Robin Williams’ cherubic mug.

Williams has always been a really weird guy and I’m never quite sure how I feel about him. On the one hand there’s Mork & Mindy, The Fisher King, and some of his more subdued performances like in the World according to Garp, Awakenings and Good Will Hunting. Then there’s his annoying manic insanity in flicks like Mrs. Doubtfire and Jack, not to mention his Stand-Up, which is equal parts hilarious and repetitive. He seems to take delight in flipping from "can’t contain him" zany comedies to parts that are so somber that it seems like he’s sleeping with his eyes open on film. Watching his Inside the Actor’s studio episode gave me a headache even, yet I still love it when he’s on. What’s kind of funny to me is that he’s sort of blazed a trail for this style of personality in Hollywood, I mean between Jim Carey and Adam Sandler it’s hard to tell the three apart, performance-wise.

Anyway, back to the reason I’m posting this, which is that I am very fond of Mork & Mindy. The shows colorful sets and Williams’ coke-induced manic juvenile humor was perfect for my three year old mind to wrap itself around. Well the merchandising began immediately with lunch boxes, sleeping bags, dolls, party supplies and of course stickers. Though I have seen some puffy stickers, I couldn’t find any on eBay, so I’m going to stick with some items that I’ve had for awhile and some I did mange to track down.

First up is the sticker cards from the 1978 Topps card set. I found a complete unopened box of these Mork & Mindy cards at my comic shop around 1994 or so for $5, so I bought it and tore open all the packs to try and make a set. Surprisingly, after 16 years the bubble gum sticks hadn’t really started to decompose yet and I managed to get a pretty nice set of cards and most of the stickers. 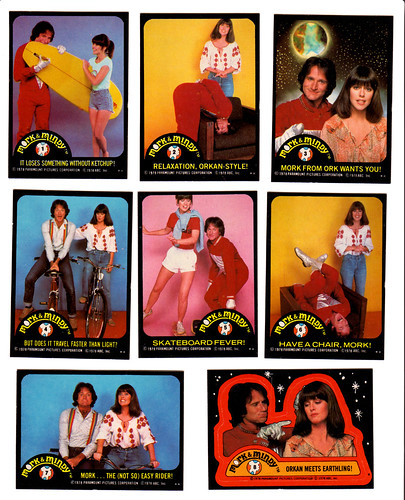 Though I didn’t care all that much for the regular cards (they all had inane word balloons added that covered most of the pictures on the cards) I really dug the stickers. 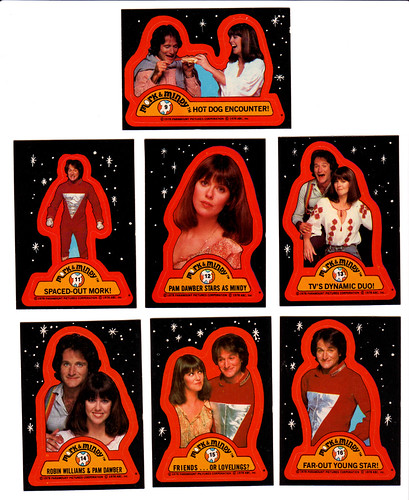 I was kind of perturbed after I began opening the packs because after the first few I realized that I just wanted the stickers and I was hoping that I wouldn’t have to open them all to complete a set so that I might be able to unload the rest on someone else. No dice. After opening all the packs I was still short one sticker, which pissed me off even more back in those pre-eBay days because the likelihood of finding that one sticker was pretty slim. So I never managed to get sticker #10 from this set. 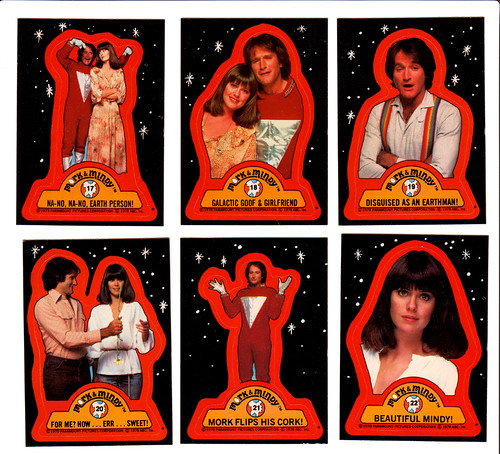 As far as the stickers go I like most of these, between the silly promo shots to the patented Topps thick bordered die-cut style. I never really understood sticker number 9 though. Don’t get me wrong, I totally get the hot dog humor, but when the hell did Mork dress up like a preppy bastard with a sweater tied around his shoulders? Must’ve been an early promo shot, or that one episode I’ve never seen where Mindy’s Dad cornered Mork in the music shop and gave him the once over twice, so much so that they started dressing alike.

I should also mention that I was such a dork in high school that in my wallet I carried around a double of the Mindy sticker, #22, like she was my girlfriend or something. Of course I also had three Clue cards, Mrs. Scarlet, the wrench and the Conservatory, also in my wallet to be a spontaneously hilarious joke if anyone every happened to asked "Who did that?" or "What happened?" Sadly it never came to pass.

These didn’t have a puzzle on the back of them, instead there were two variations on the backs, either they were just white or they had instructions as to how you were supposed to peel the sticker off, so I guess Topps wasn’t using the stellar "peel here" arrow yet. Instead you were supposed to fold the sticker card corner forward just enough so that the sticker would come loose and then peel it off. I’ve seen these same instructions on other sticker cards sets too, though I guess they weren’t all that popular as in later years almost all of the Topps sticker sub-sets were die-cut. 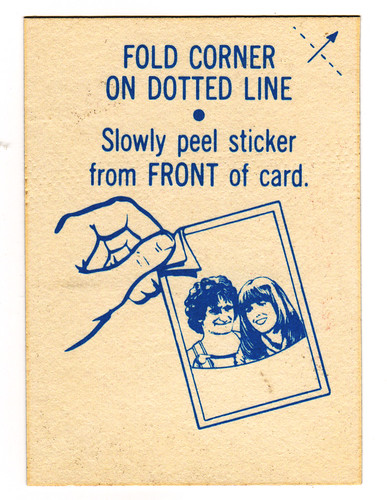 The second style of Mork & Mindy stickers today aren’t really stickers in the most traditional definition of the word. They’re sticker-esque enough though, so I present the 1979 Instant Stained Glass window clings. I’ve only managed to snag three, though there are more styles floating around out there. 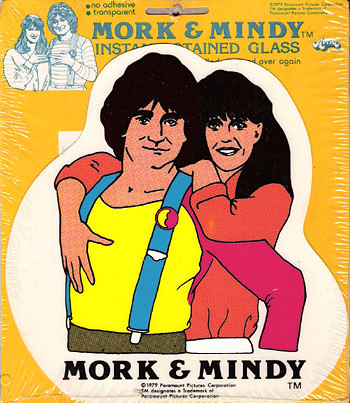 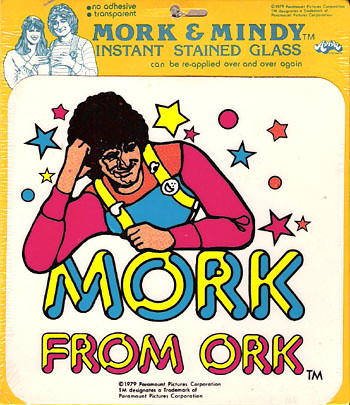 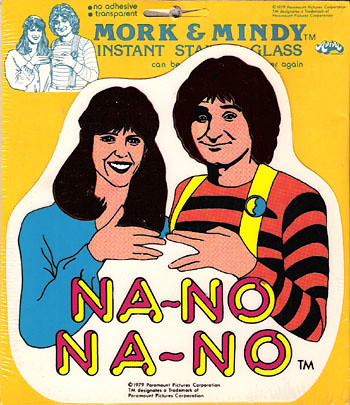 On next week’s Peel Here, I begin week one of an entire month’s worth of scratching and sniffing.

Space Academy, or how to smile real big in a scary kind of way…