Peel Here #14, Hey did that Tyranosaurus just flip me the bird?

For this week’s Peel Here I thought I’d share a weird little Topps sticker card sub-set from the 1988 Dinosaurs Attack! card set. I remember getting a few packs of these around the time that I started to wind down my Garbage Pail Kids collecting phase. It was around this time that I really started getting into horror and the crazy brutal depictions of dinosaurs eating busloads of kids and stuff was right up my alley. What I didn’t realize at the time but have since learned is that this card set was indirectly related to the 1962 Topps Mars Attacks card set and was trying to re-spark the interest in story-based hand painted card sets that they made popular in the 60’s.

These sticker cards actually follow in a long line of gruesome sticker trading cards published by Topps; from sets like Ugly Stickers and Monster Initials to more modern sets like Wacky Packs and Garbage Pail Kids. It’s sort of hart warming to know that there is this weird gory underbelly to a company primarily known for its Baseball cards. 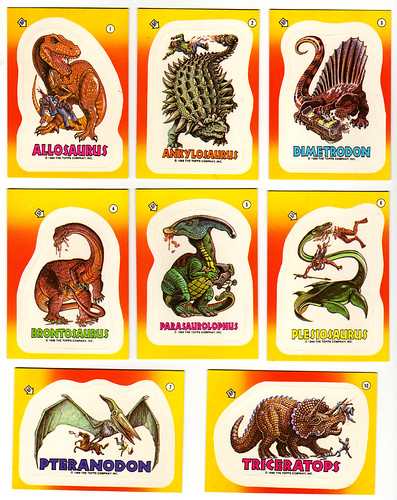 Though they’re all pretty frickin’ nifty, my favorite sticker in this set is the Parasaurolophus, a duck-billed crested herbivore that is depicted snacking on a baby stolen from it’s carriage. The irony is just too funny.

I also think it’s hilarious that the writers/designers either felt the need or were told to include some actual factual information on the dinosaurs in this set. I guess someone was afraid that kids might actually believe that dinosaurs would discover time travel and come eat their parents and baby sisters. I mean we all know that sentient robots will discover time travel in the year 4050 and go back to the age of dinosaurs to eat their young and play with their eggs in giant robot bocce ball tournaments. Sheesh. Anyway, all of the sticker card backs have some fun facts like phonetic spellings and mini biographies. 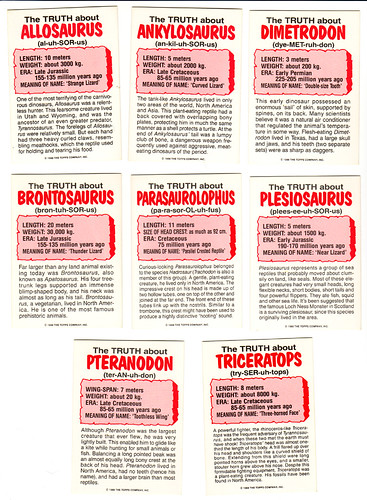 As I mentioned above, there was actually a wacky story to this card set were dinosaurs were zapped through time to the present and decided to start munching down. As the plot goes, a bunch of scientists work to send them back in time, succeeding, but not before the main scientist has to sacrifice himself to buy the others more time. There’s a great site that has some decent scans of the wrappers, the main cards and the story on their backs, and some of the history of this set.

According to the wiki page on the Dinosaurs Attack! card set, Tim Burton was possibly interested in doing a film based on the cards, but passed on it after Speilberg made Jurassic Park, instead doing the under appreciated Mars Attacks! flick.

Actually the punk with the spiked mohawk getting run through by the spikes on the stegosaurus’ tail is pretty cool too.

Also, I’d like to put this out there. If anyone has any personal sticker collections from the 80’s that they’d like to share via scans and stuff in a future installment of Peel Here, feel free to e-mail me or leave a comment. I don’t want to spoil any future installment surprises so I won’t list what I already have, but if you are interested, we can confer to see if I don’t already have the stickers. I’d be willing to scan in the stickers and pay for postage if scanning them in is a problem.

Anyway, on next week’s Peel Here I’m going to break the 80’s limitation convention a little by stealing a concept from Quantum Leap and making it a rule that I can present anything that falls within my lifetime that I was into as a kid. So I’ll have some fun stickers from the late 70’s to share.

Wax Paper Pop Art #12: One of the best looking mustaches in the business…