Peel Here # 13, Just imagine me building a super sticker machine in a rock music filled montage in the middle of the column…

So where do I begin with this week’s edition of Peel Here? I wanted to hit something big, or big-ish, this week so I decided to take a look at all of the various stickers I’ve accumulated for that bad ass of bad ass 80’s TV shows, the A-Team. I don’t think there is another show from the decade that quite captures the essence of what it was like, pop culture-wise, in the 80’s. I mean Mr. T himself is about as large of an icon as I can think of that practically anyone would associate with the decade. Add to that the sweet van, the brilliant armored vehicle-building montages, Face (aka Templeton Peck, aka Dirk "I have some wonderful hair" Benedict) and his slick corporate ways, lots of miscellaneous shooting and car flipping, an awesome theme song and a million catch phrases and you’ve got yourself a little bit of 80’s heaven.

This show was the subject of a barrage of merchandising from toys (my favorite being a set of fake Mr. T gold chains that you could buy on an A Team branded blister card) to electric racing sets, lunchboxes, party supplies, story books with records, comics, trading cards and a butt load of stickers. I haven’t managed to track them all down, to be honest I’d have no idea of where to start something like that, but I have picked up my fair share of A-Team stickers. I think I’ll start off with the 1983 Topps trading card sticker subset. 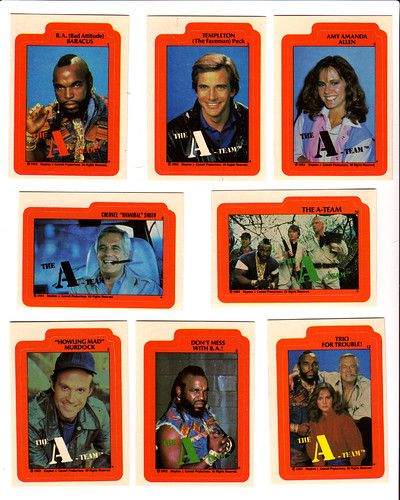 This set of sticker cards is a little weird in that it deviates from some of the normal Topps sticker card conventions. There are 12 stickers in the set (which is normally composed of a multiple of 11), there aren’t any of the neat character stickers with the die-cut thick colored borders (all of these are pretty much your basic square, though it is kind of cool because it’s shaped like a file folder), and there are 9 card backs that make up the puzzle (the puzzles are usually 10 card backs.) 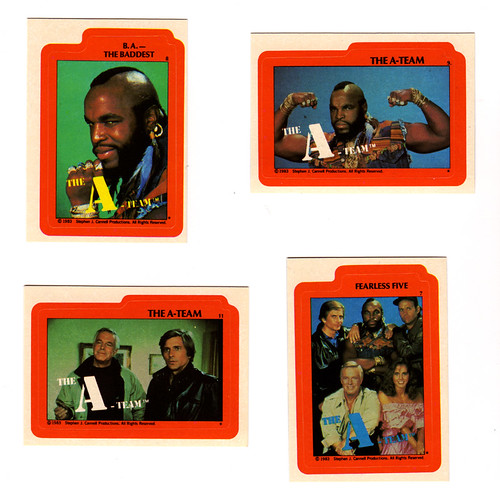 The set (like most A Team merchandise) is very Mr. T-centric though. 7 of the 12 cards feature his purdy mug. I was kind of surprised that Murdock wasn’t on more of the stickers. I always thought he was sort of like the second most popular, but that space is reserved for Mr. Hannibal Smith. Hell, even Face gets four stickers and poor old Dwight Schultz is only on two, right next to that annoying reporter chick Amy Amanda. I think it’s because the card set was released after the 1st season of the show when the over all story had Murdock spending most of his time in the VA mental hospital as sort of a secondary character (he wasn’t implicated in the charges against Hannibal, B.A., and Face.) Oh well. 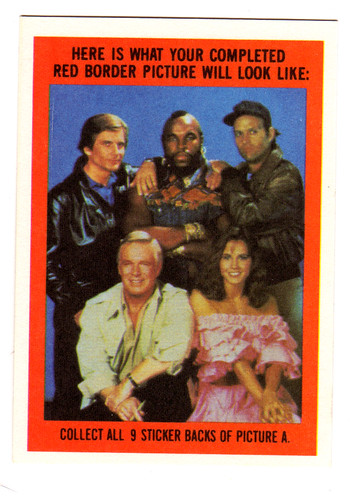 I also managed to procure this entire set of stickers, so I’ve done my best work with Photoshop to provide you with a pristine view of the completed puzzle backs picture. Or more accurately, I scanned it in, in PS and left all the horribly mismatched pieces as they were in my very lazy laziness. Luckily because it was composed of 9 card backs I was able to scan it all in one go and honestly the pieces weren’t all that mismatched. Hannibal’s face suffers a little as does Murdock’s hat, but it looks decent enough. 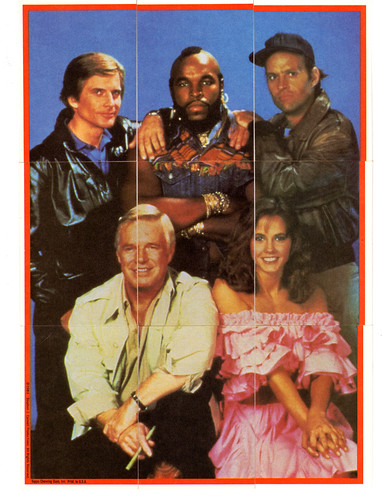 If there’s one aspect that I truly love about my meager collection of A-Team stickers it’s that they hit most of the styles of stickers the 80’s had to offer. Here’s an example of the many puffy stickers that were available. This first pack comes to us from the Larami Corporation circa 1983. There are at least two different sets of these 6-pack stickers but I only managed to find one on the cheap. Like the Topps sticker cards above they are very Mr. T-centric. From this you can start to see that there were some obvious stock photos the various companies that licensed the show could choose from as two of these are repeated from the Topps set. At least we finally get a sticker of the sweet ass van though.

I also managed to procure a more snazzy set of puffy stickers, this time with twice as many stickers and a little A-Team branded sticker album to boot. I’m not sure if this was also done by Larami (the package was way too large and bulky to get a great scan of so the company logo part was cut off I think.) 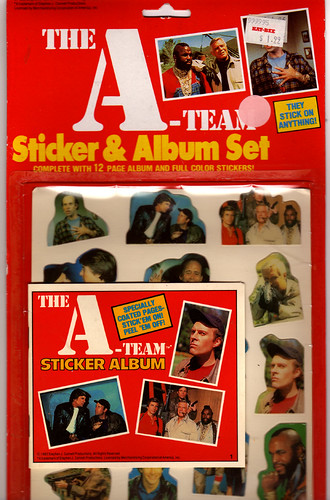 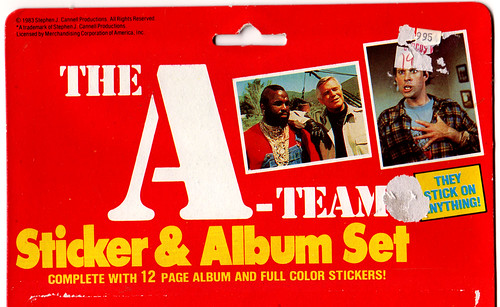 I really dug this set of stickers because it came a little bit later in the reign of the A-Team on TV and thus Murdock has stepped forward into the limelight. They also ditched the reporter chick, which is fine by me (she was cool in the pilot movie, but kind of a drag on the actual show.) 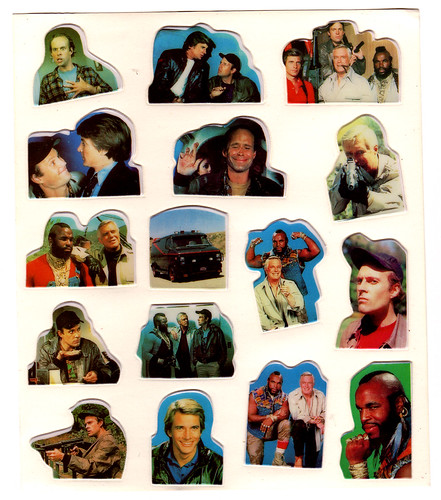 The Sticker album that is included with this set is kind of plain. It’s laminated so that it would be easier to stick, remove, and re-apply the stickers, which is a really odd aspect of puffy sticker advertising in the 80’s. A lot of the puffy stickers I’ve seen have been marketed as being re-stickable (which I think is pretty much totally not the point of stickers if I may be so bold), probably so that you could trade them with friends and stuff. In fact there are a few pages in the A-Team sticker album set aside for just that. Normally I’d say that, that was crazy, that no kids were swaping used stickers and junk, but as I’ve discovered Stickers Magazine I’ve come to realize that for a short period of time stickers were so damn hot that yes, kids were trading used stickers with each other. 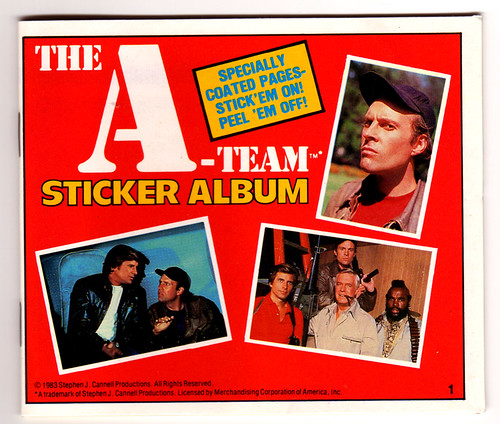 To round out this fun set of A-Team puffy stickers, there was a pretty cool coloring book page on the back of the package. I am so in favor of design work like this. Leave no space unused. I kind of think it’s funny though that they chose such high contrast linework because if a kid were to color in the van it would disapear in all the black. 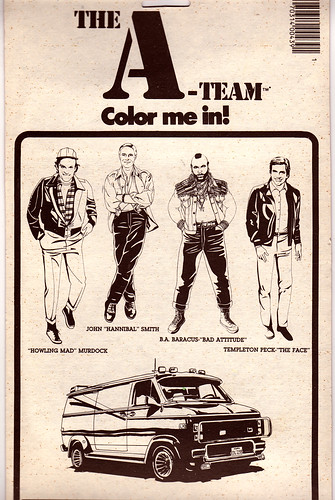 Continuing in the puffy sticker vein, but taking a short break from the live action A-Team show, we’ll take a small detour into animation land for this next set of stickers. The Mr. T cartoon was one weird show. I only caught it a handful of times, but when I did see it, usually as part of the USA Cartoon Express, I was totally lost. Okay where the hell did this group of gymnast kids come from? Why are they hanging all over Mr. T like so many Scooby Doo rejects? Did that freaking dog have a mohawk naturally or did the sweet man-aroma of Mr. T make it grow? There was also the scrappy little red haired kid, Spike, who was like the weird amalgamation of Mini-Me and that kid that came on the later seasons of Dif’rent Strokes, which I totally dig because ever hero character needs that type of creepy sidekick.

Though I didn’t find a set of stickers with the weird gymnasts, there was at least one of the sweet dog with the mohawk.

Finally today I have something pretty darn cool. Since I started going nuts collecting these 80’s stickers the one bit of branding that I’ve pretty much flipped for are Colorforms Lazer Blazers 3-D Holographic stickers. Though I never saw these as a kid and honestly, I don’t care all that much for holograms, there’s just something about the presentation of these stickers that makes them pure awesome for me. I think it probably has something to do with the in your face packaging and presentation, I mean the Lazer Blazers logo is larger than the stickers for crying out loud. I also really dig them because they were available with a ton of different licensed characters. Today, obviously I’m offering up my A-Team Lazer Blazers. 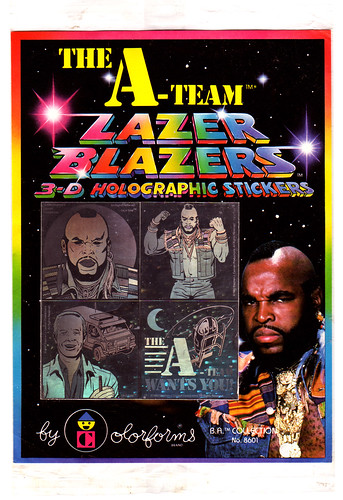 Each package of LBs came with four hologram stickers. For these we’re back to the Mr. T love, though there is a pretty sweet George Peppard sticker. The fourth sticker, the helicopter, is pretty dumb; I mean they picked a helicopter instead of the Van or Murdock? Hell I’d accept one of the reporter lady character before some misc. helicopter. Oh well. 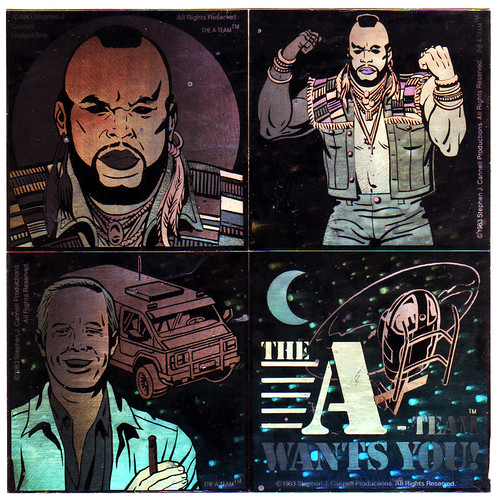 What I think is kind of funny about Lazer Blazers is that apparently hologram technology was still something that was pretty new, and this brand of stickers was the only affordable way of getting one (there were tons of really expensive paperweights and statues that took advantage of the technology.) Well because of this Colorforms printed out a list of instructions on how to view the stickers properly, as if kids couldn’t be trusted to move the damn things around until they saw the image in all of it’s rainbow-rific, faux 3-D glory. 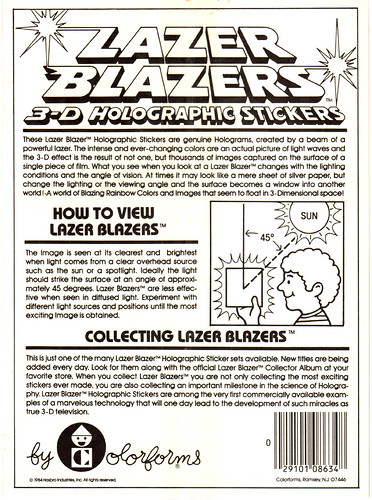 Colorforms even went so far as to print out the regular black and white line-work of the images on the stickers underneath the stickers themselves on the back of the packaging. I guess they just figured that there were some pretty stone stupid kids out there. 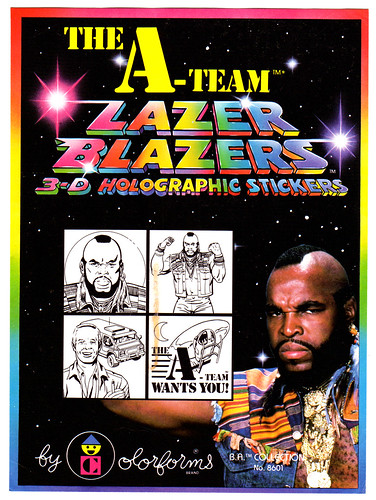 There were two other types of A-Team stickers that I wanted to share, but they were just too damned expensive or hard to find.  The first were these awesome ‘color your own stickers’ that came in a set with chocolated scented crayons included.  The thought of coloring in Mr. T with a chocolate scented crayon sounds either too cool to be true or maybe a little racist, but either way it’s interesting.  The other style of stickers were Mr. T Scratch ‘n’ Sniff stickers which were just non-existent in the past few months on eBay.  You can see some of them at Bubbledog’s awesome 80’s Scratch ‘n’ Sniff sticker site (they’re at the bottom of the page.)

Also, I wanted to give a shout out to both Check the Cool Wax and the XYZ Cosmonaut for putting up those fun comics and the record book up on their blogs.

Anyway, next week on Peel Here, um, I guess I’ll surprise you all.

The Branded in the 80s Mixtape, sponsored by The League…

School Book Club Flyers from the Past part 2, Weekly Reader!

I shouldn’t need a second job to buy action figures…