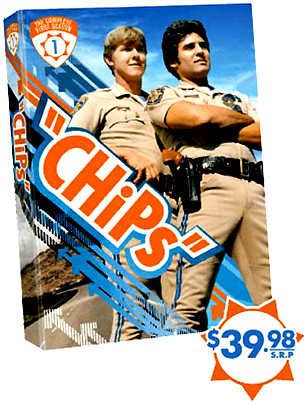 The first half of this year is going to be so much fun as far as 80’s (and a little bit of 70’s) nostalgia DVDs is concerned. Like the short list of out of print movies I’ve been waiting to be released on DVD, there is also a list of TV shows that I would love to own. The TV list is a lot longer than the movie list seeing as TV on DVD is pretty much in the middle of it’s DVD boom, but of the titles on the list there are a handful of shows that top the list that I wanted for awhile. The M.A.S.K. cartoon (which I think Shout Factory might be releasing in the near future), Family Ties (which will be coming out shortly), The Love Boat (did I just admit to that), and the topper CHiPs.

Well the wait on CHiPs is now over as Warner Brothers has officially announced that they will be releasing the complete season 1, 22 episodes in total, on June 5th. I have a really weird love and addiction for this show. Growing up I only saw it in re-runs and pretty much only on those days when I got to stay home sick from school as it was prime daytime TV, much like Gomer Pyle, Bewitched, Alice, and What’s Happening. It was like the equivalent of what Law and Order is for me now, an hour of harmless cop pseudo-drama but with a whole bunch more Larry Wilcox and Erik Estrada. I used to cross my fingers every time I sat down to watch that it would be one of the Halloween episodes because I loved seeing Elvira guest star on the show.

It’s not that my voice MAKES your ears bleed, it’s that you’ll want to make them bleed after listening to it…