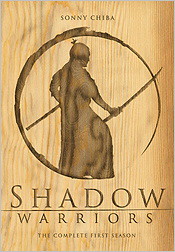 Man, as if I needed another reason to love BCI Eclipse, they’ve announced that they will be releasing the 1980 samurai/ninja show Kage No Gundan (the Shadow Warriors for us who got a chance to see it in America) season 1 on April 17th.

For those who don’t know, Kage No Gundan was the awesome television show starring Sonny Chiba as Hattroi Hanzo the leader of a once proud ninja clan that has fallen from grace and is hired again to protect the new young shogun. It’s basically set up like a crime drama with Chiba as the detective. If you haven’t seen the show, you might have seen Chiba portray a descendant of Hanzo in Kill Bill. In fact on further seasons of Kage No Gundan Chiba would reprise his role, though as a descendant of he character from the previous season, so each new series takes place like a few generations later. For Kill Bill Tarantino had Chiba reprise this role for the sword maker, both in homage and to link the film to the “universe” of samurai and kung-fu films he loves.

After I saw and fell in love with the Kill Bill flicks I spent awhile doing some research on the various films that inspired Tarantino and even went so far as to put together a list that my friend and I worked through last year. I ended up buying a bootleg copy of 2 episodes of Kage No Gundan off eBay because there were never any official releases in America. I’m so freaking glad that it’s going to be released on DVD soon so I can watch nicer versions, not to mention the rest of the first series.

Wax Paper Pop Art #27, The most powerful wrappers in the universe!