We tried sodium amatol on him three years ago to find where he buried a Princton student; he gave ‘em a recipe for chip dip.

Manhunter is one of those films that took me a long time to get to, and I basically came to it the long way.  I knew that it was the first film based on the Thomas Harris novel, Red Dragon, and that it was one of Michael Mann’s first flicks, but I just ended up avoiding it time and again. 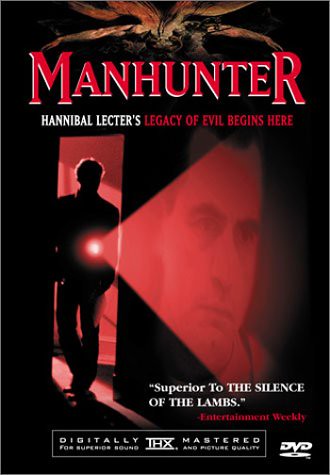 I first got into Thomas Harris back when most people did, after seeing the Silence of the Lambs.  I was pretty darn heavy into Stephen King at the time and as a kid I was one of those weirdos that ignored anything that wasn’t written by the one author I loved.  All I did was read Stephen King novels until one day my mom got on to me about broadening my horizons.  I had just seen the SOTL flick and loved it, so I asked my mom of she’d let me buy the TH novel after I saw it in the grocery store.  She was so happy that I wanted it that she bought it for me on the spot, not thinking that there was probably more screwy non-kid material in that book than most of King’s work.

Anyway, even as a kid I was surprised at how close the movie was the novel (I managed to squeeze in the Batman movie as well as the V mini series novels at some point of my deranged Stephen King only obsession which were good but not great.)  I never decided to check out any of Harris’ other novels though, and didn’t even realize that there was more to the Hannibal Lecter universe until the book and movie hit for Hannibal.  At that point I’d already been burned by the Lost World movie and book so I decided to skip it figuring it would just be bad.

Then I saw the previews for Red Dragon and I realized that there was more to this world of FBI agents and serial killers, more in a pre-Hannibal sense.  I was intrigued by the trailer for Red Dragon and by that time I was a pretty big Edward Norton fan, so I figured I’d read the book (which came out before Silence of the Lambs was published) and then take a chance on the movie.  I mean how could it be bad what with Edward Norton, Phillip Seymour Hoffman, Ralph Fiennes, and Harvey Keitel, even though he’s light years different than Scott Glen I figured he’d make a decent Jack Crawford.  Anyway, I checked the book out of the library and fell in love with Thomas Harris all over again.

I mostly dance to the ghostly music…