The Adventures of Brisco County Jr., what can I say?  If you’ve read either of my blogs, I’m sure you’ve heard me complain time and again about this DVD set, most notably because of the absurdly high MSRP of $100.00.  This set is one of those examples where the studio producing the DVD set leverages it’s production costs and expected niche market with a high enough price tag so that they will be certain to make a profit.  To their eyes die hard fans would slap down that C-bill if only because the studio decided to grace them with a release.  But a $100 for what basically amounts to one season is crazy.  Back when DVD was first hitting it was common for TV shows to be in this range, the X-Files, Monty Python (which at least had 4 seasons worth of shows, even though the running time is about the same as on the Brisco set), and more recently the various Star Trek shows.  I’m not positive about this, but it’s pretty peculiar that all three of those examples have recently cut their prices in half if not more.  I mean, I just don’t think people were rushing out to spend $150 on the Monty Python DVDs.  But $75 for what breaks down to about $1.50 an episode which is a much more reasonable price and close to the industry standard. 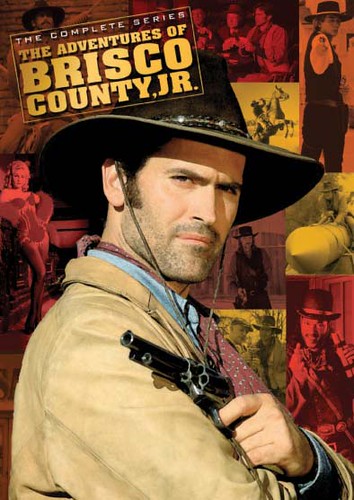 So, to beat a dead horse, I was upset that a series that I loved in it’s initial run and have been waiting for on DVD was just too damn expensive to own.  Of course right about now it sounds like I don’t own it.  Well I do, but damn if I was going to pay $100.  I waited, and waited and waited some more until I found one used on Amazon for under $50, and I finally did (consequently at the same time that Amazon had a 50% off sale on the title) so the one I got was actually new, and I’m very happy with it.  Rant, rant, rant.

I first got into this show in high school during a time when Fox was pumping out great fun shows like the X-Files, the Simpsons, Alien Nation and 21 Jump Street.  TV used to be a lot more fun then. I hadn’t gotten into the Evil Dead films yet, so this was my first exposure to the great chinned one and his awesome delivery of one liners and slapstick comedy.  This is also another example of a show, like Alien Nation that I could have sworn was on the air for at least a couple of seasons, but it’s was only on for one which was stretched out of a year or two.  Also like Alien Nation and other more recent Fox shows like Firefly it was pulled before it had a chance to breathe and get a large enough audience to sustain it.

Shaking the Pillars of Heaven…