The woman and I decided this past weekend to “do it up right”, by which I mean that I practically forced her out of the apartment on an adventure to a flea market in the middle of nowhere followed by her choice of fun eating establishment, namely Stevie B’s pizza buffet (which is like the unloved smaller cousin of Chuck E. Cheese with a lot less games and a lot more weird pizza toppings.)

I sought out the flea market in hopes of finding some fun gems from the 80’s but didn’t really find anything. There was one stand that had a bunch of comics and a few magazines. The comics were so mixed up that it was way too much of a chore to look through them, though I did find an issue of Marvel’s Alf for $0.50, so I snagged that. I found a couple Starlogs from the early 80’s with articles on the Dark Crystal and V, so I’m sure I’ll be sharing those in the coming months. Other than that it was a bust though, so I left feeling like I’d never find anything cool from my childhood, at least not this particular weekend.

When we hit Stevie B’s my only expectation was weird ass pizza and some ghetto skee ball. As far as pizza goes, we hit the jackpot. On the buffet were no less than five weird ass pizzas including, baked potato pizza (slices of baked potato, bacon, and cheddar cheese with a sour cream-esque sauce), taco pizza (slasa base topped with ground beef, cheddar cheese, black olives and lettuce), nacho pizza (same as the taco pizza with no lettuce and a lot more corn tortilla chips), mac & cheese pizza (think pizza crust topped with mac & cheese and then topped with mozzarella cheese), and for dessert, Boston cream pie pizza (let your imagination run wild.) Definitely cheered me up.

I was coasting on semi-terrible yet amazingly fun pizza when we hit the tiny game room in the back, hoping that the Galaga machine was at least still there, when I saw them. Two boys were cashing in their meager strings of prize tickets for these little red and yellow envelopes that contained a blast from my childhood. Power Prop Flying Gliders. The day was now complete. 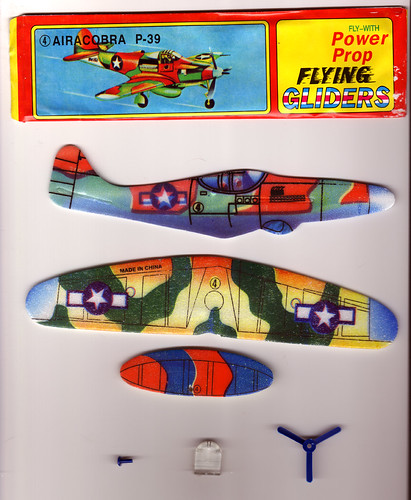 I must have won a hundred of these fragile Styrofoam WWII gliders from Chuck E. Cheese, Showbiz pizza, and the couple of arcades I went to as a kid. Out of all the bins of plastic spider rings, crayons, little plastic jumping frogs, super bounce balls, fake plastic moustaches and pixie sticks, the Power Prop Flying Gliders looked like the best possible option, the winner of the beauty pageant that was cashing in tickets for prizes. It was like the Wheel of Fortune back in the 80’s when you’d spend your loot on the crap residing in the rooms on the spinning platform, and the gliders were always the first choice, with a spider ring thrown in to spend out the ticket change.

As you can see from the scan above, they really are simple as hell. One body with two slits punched in it for the wings and tail rudders, one plastic weight (and propeller holder), and one propeller and pin. 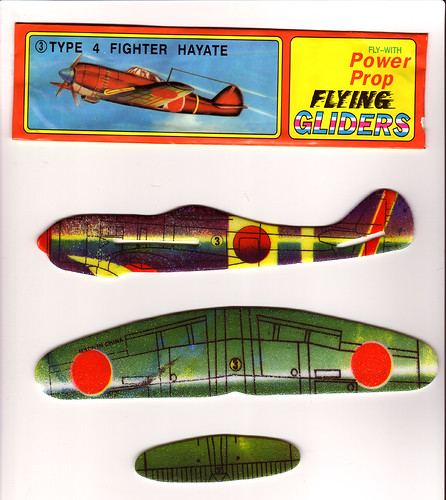 I managed to get enough tickets on crappy skee ball and this weird “shoot a token into a hole via a ski slope” game to get three of these gliders. These are exactly as I remember them, down to the styles and packaging. I’m not sure if these were a product of the 80’s or if they were gliding through parking lots and crowded birthday parties in the 60’s and 70’s as well, but I haven’t seen on in almost 25 years.

I left it up to the lady at the ticket counter to pick out my three gliders because I wanted to be surprised, and she did a pretty good job picking. Not only did I not get a duplicate, but I also got one of three different WWII factions, America, Japan, and Germany. She also managed to pull out one of my favorite designs, the EOCKE Wulf TA 152H, better known in my simple mind as the purplish, blue-red one with the German symbol on it. 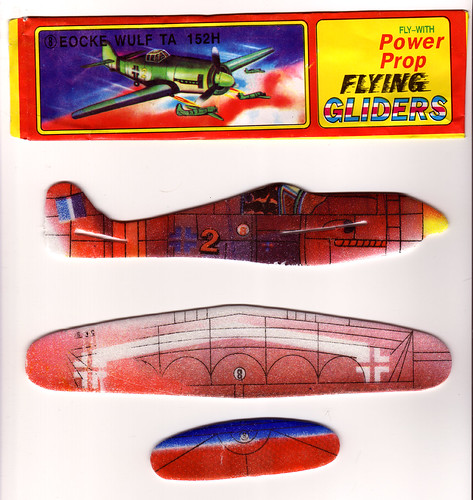 After a quick scan of the available designs on the back, the Wulf is the one I’d choose first every time. So yea, me. When I got home and constructed them I went through the same range of emotions that I probably went through as a child, that it felt too light and skimpy to actually fly and then the amazement of watching it soar along my apartment hallway when it did in fact fly very well.

When I was a kid I always wanted one of those large sturdy Styrofoam airplanes that people were always demo-ing in the mall, the all white ones with the blue and red stripes down the side and a penny inserted into slits on both sides of the nose to give it weight. They would always do these awesome loop-de-loops in the open air of the mall and it fascinated me, though they were a bit steeply priced for what they were and I invariably ended up with the flying gliders that I’d score at Chuck E. Cheese instead. In the end, I’m glad I did.

All in all it made for a nice capper to a fun weekend.