Peel Here # 11, My lunchbox is cooler than yours, it’s metal and can beat up your stupid plastic one…

For this week’s Peel Here Column I’ve decided to bust out my favorite acquisition of my recent insane sticker buying frenzy. While I was looking up various 80’s cartoons on eBay to see if there were any available sticker products I stumbled up a few buy it now auctions for some awesome unapplied stickers from some Aladdin Industries plastic lunchboxes. I’ll be honest, though I’ve dabbled in lunchbox collecting, I never dreamed that there were any unapplied stickers circulating around on the secondary market.

When I thought about it though, it started to make perfect sense. One of my biggest complaints about plastic lunchboxes growing up was that after my mom would wash them (as she would invariably do in the dishwasher) the sticker would soon fall off. Then I’d be stuck for a whole year with a plain lunchbox with a huge unattractive white fuzzy mess on the front. I’d be willing to bet that a lot of parents called in and complained and were issued replacement stickers, and it makes sense that a lot of these are probably still around. Also there are probably old production rolls that employees took home and stuff, but when I first saw these my jaw dropped. I managed to snag three pretty nice stickers, well, two nice ones and one that’ll make your eyes bleed, but I’ll get to that one in a moment.

I was kind of hesitant to write about these yet because I’d really like to get a few more to share, but after scouring eBay for two months and losing four or five auctions to crazy people who are willing to pay upwards of $30 for an unapplied lunchbox sticker I had to quit looking. So without further ado I present some fun lunchbox sticker-y fun: 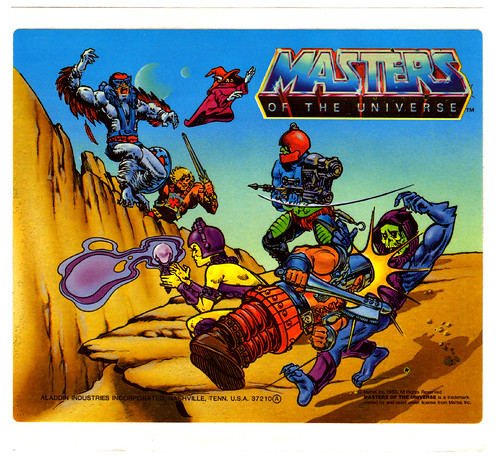 I was really excited to find this Masters of the Universe LB sticker because initially it was pretty slow going trying to find any other stickers with the MOTU branding that were affordable. I remember having a MOTU lunchbox, but I think it was metal because I don’t remember this picture at all. I want to say that the plastic ones might have been a little more rare as He-Man was exiting stage left when the plastic lunchboxes were bursting on the scene. I really dig this picture though because it’s kind of odd. First of all it’s an amalgamation of separate pieces of art from various places. The Evil Lyn image is from one of the earlier production paintings, as well as the He-Man image. In fact these might all be from the same series of paintings (we’ll find out later in another sticker set.)

I also like it because outside of including Merman, this has all of my favorite characters, all doing weird stuff. Stratos looks like he’s about to fall out of the sky (with a falling arm gauntlet feather no less), Ram-Man is fighting Skeletor instead of He-Man, Evil Lyn is using her magic on nothing in particular (except maybe that oddly, almost implausible, rock formation they’re all standing on), Orko is running away from the good guys towards the bad, and He-Man is almost not existant in the background. I’m sure most kids that had this lunchbox were looking forward to a dishwasher washing or two.

Our second sticker comes from a cartoon that I have some really odd memories of, Voltron. 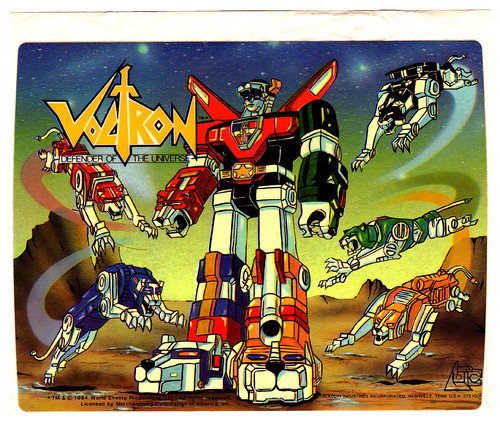 I never managed to catch the cartoon on TV while I was growing up; none of the local affiliates seemed to carry it. That doesn’t mean that I was a novice in the way of Voltron though. I developed a major crush on the toys after taking one glimpse of the remote controlled robot during a Toys ‘R’ Us commercial and thereafter asked for it for Christmas three years running. I never managed to get that remote controlled one, but my father found a cheapo plastic set of the lions at a local Florida flea market that I played with to pieces.

Voltron was my first merging robot crush, and ended up being just as unrequited as my love for Devestator would become a year or so later.  I’m still kicking myself for not picking up the toys that were released in the 90’s, but I had a Magic the Gathering habit to support at the time.

This sticker is pretty cool, though it’s kind of weird how it shows both the fully formed robot as well as the individual lion robots. You’d think that who ever designed it would have had the human characters instead of the lions, but then you’d also figure that whoever mocked up this image cared one iota about the cartoon which I’m sure they didn’t.  I’m also missing the badass sword, but that’s just a nitpick in an otherwise awesome sticker.

The last sticker that I’m going to talk about today would have been my favorite if not for the horrible double printing that it suffered from. That’s right, it’s not my scanner, or your eyes, this is just one hell of an ugly sticker. It’s the kind of sticker that makes you want to keep rubbing your eyes so you don’t get a migraine looking at it. I actually had this lunchbox growing up and it would have been really cool to get a copy of this sticker, but it’s just my luck that the only one available makes me want to poke my eyes out so I don’t have to try to focus anymore. Oh well, can’t win ’em all the time. 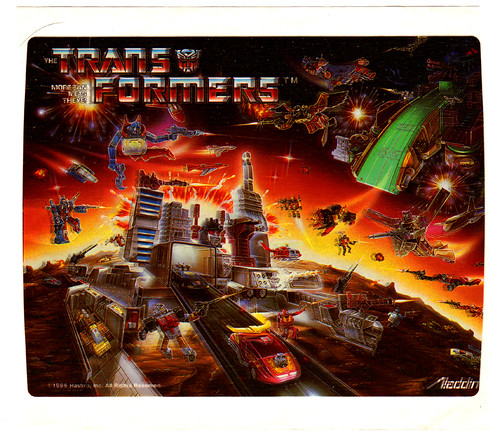 The image on the sticker is one of the great examples of Transformerdom where impossible things happen that make a fanboy want to cry. Well I say that, and I’m probably wrong. For instance, Ultra Magnus and Blur are flying. I always thought that outside of the Aerialbots and a few other exceptions that none of the Autobots could fly (except maybe in space.) I’m probably wrong about this, but it bugged me as a kid, and it bugs me now (though I’m a rational adult and I’m sure I’ll be able to get over it, at least without crying.)

Of the lunchbox stickers that I didn’t manage to acquire, the one that really roasts my goat is a Goonies sticker. I did not realize that there were Goonies lunchboxes. I was so sheltered as a kid.  I wanted to win that auction pretty bad, but it ended at like $40 or something stupid crazy like that and I am just not that dedicated.  I guess that means that I’m maybe not as obsessed as I thought I was.  Huzzah.

The Legend of Randi Bellisario