Let’s put it this way: I fought for the South. We lost.

The mid 90’s were kind of a weird time for me.  I was still sort of obsessing over vampires (after getting into the Vampire: The Masquerade role playing game, reading Anne Rice and Poppy Z. Brite for the first time, and getting into flicks like Blade and Dracula), I was just graduating high school, and I found myself with a job and actual cash to spend on stuff like comics and videos.  I had just stared putting together my first movie collection when I began to realize that a lot of the flicks that I loved growing up were out of print or on the verge of becoming that way. 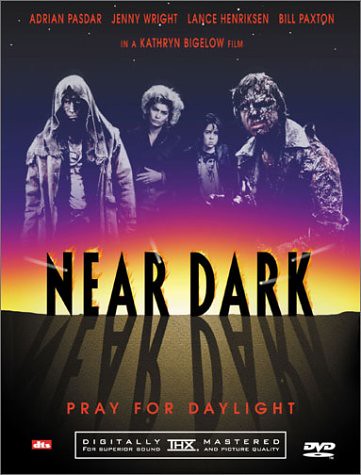 One of these flicks was a little known gem of a film (at least in my circle of friends) Near Dark.  I had seen it on HBO about a million times in the late 80’s and it was by far my favorite vampire story with realistic blood suckers in a realistic environment.  I was getting pretty sick of the lacy, frock wearing vampires in period pieces, or the goth obsessed depressing whiners that I kept seeing in films.  Jesse, Severen, Mae, Homer, and Diamondback were exactly what I thought of when I was thinking vampires, no huge fangs, bat-shit crazy from being alive too long, drifters, and pretty much punks.  You don’t even hear the word vampire uttered in the flick, it’s just understood, which is awesome.  I also love that the cast is almost entirely stolen from the cast of Aliens because Kathryn Bigelow was with James Cameron at the time and loved the work they were doing in that flick.  It helped a lot I think because they already had a rapport going off of that flick and thus they could just jump right into these new parts.

I bought my first copy of this flick in 1996 or so, ordered it special from a Media Play in my home town.  I was told that I got the last copy in their warehouse which was pretty cool as I soon found out that it was out of print.  Later when I switched over to DVD I was pretty bummed to find that it wasn’t being released.  It was one of those flicks (like the Monster Squad) that I was considering buying on bootleg because I just didn’t think it was near popular enough to garner a release, but I was surprised in 2002 by a 2 disc special edition in a nice slipcase and everything.  My friend Daniel at work bought me a copy for Christmas that year.

To this day I still think this is the closest thing to the perfect vampire film, if nothing else one that a lot of other filmmakers could stand to learn from.  Lance Henriksen in particular is pretty darn intense in this flick.  According to the extras on the DVD, Henriksen had these gnarly thick fake nails glued to his fingers which he tore up and cut at weird angles and stuff.  He then got into character and pretty much stayed in it until the end of filming, going so far as to drive out into the desert in his off time and fuck with cops as if he was the character he was Jesse.  It’s also some of Bill Paxton’s more lively work which is really fun.

The only thing I don’t really care for is the weird blood transfusion stuff at the end.  It’s just a little too much of a storybook ending. Part of the attraction of vampires for me is that it’s permanent.  You’re either a vampire or you die.  But that’s just me.

Day 4 of the Halloween Countdown: Some fine British horror classics!

Day 17 of the Halloween Countdown: More gummi than you’ll need ever!