You’re only mistake is that you didn’t dump her first. Diane Court is a show pony. You need a stallion, my friend…

My friend Kevin and I watched this flick last night for our regular movie night, so since it was fresh in my mind I thought I’d talk it up.  This is the film that cemented my man love for John Cusack back in the early 90s.  See I’m not gay, but if I were, I would be searching the world for my own Lloyd Dobler, that’s all I’m saying. 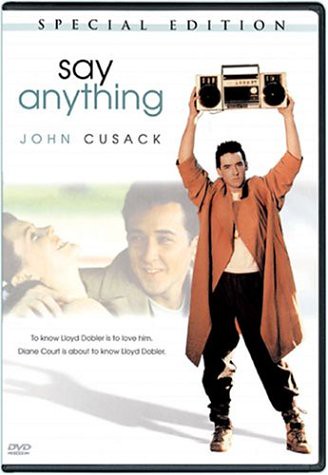 I think I first saw this flick on cable after I started to develop my healthy man-crush on Cusack (I was in love with One Crazy Summer and Better Off Dead at the time) and it very quickly made it’s way into my "must learn from this movie", adolescent, "oh crap, I’m in high school" movie rotation.

Over time, what I’ve ended up loving most about this film is how "on the head" Cameron Crowe hit with this story.  It used to seem kind of unrealistic (well the tax stuff still does to an extent) but after I met and started dating my girlfriend Carrie my life played out almost exactly like this film for a couple of years.  Carrie’s mother (who is single after a later in life divorce) was the picture of John Mahoney’s character, though she managed to take to possessive craziness to a much further level.  There were insane curfews and family destroying fights simply over us dating.  I never had to fight so hard just to go out on dates, and we weren’t even teenagers, this was post college.  It was pretty crazy for awhile and I kept hoping she didn’t pay her taxes or something so she’d get thrown in jail and I could convince Carrie to give her a pen and be done with it.  So at the time this film sort of become really important to me and my now fiancee, and still is sort of a symbol for our relationship.

Every wanted to buy a buttload of stickers all at once?