Peel Here #8, Sticker Fun Books, or How Golden Books tricks us into believeing that stamps are stickers…

In this week’s edition of Peel Here I’m going to take a look at some stickers that truly aren’t stickers, even though they’re called stickers. They’re really stamps masquerading as stickers, which isn’t all that far off, but for kids with chronic sandpaper tongue, well it just can’t be as fun. So what is this outcast of the glue on paper clique that wants so badly to be part of the sticker-y fun-ness? Why it’s the Go-Bots Sticker Fun Book brought to you by the same company that printed most of the coloring and activities books for the last few decades, Golden Books. 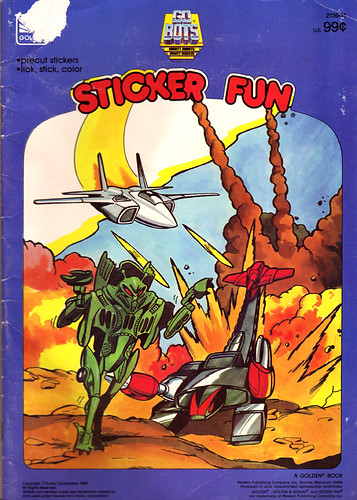 Unfortunately the Golden Books logo is half missing on this book, but I was a cheapskate when it came to procuring one of these for review so that I could cost effectively feed everyone’s 80’s sticker obsession hunger. Or maybe it’s just my 80’s sticker obsession hunger. Someone is hungry for stickers damn it, and I aims to please, but only if it costs less than a soda. Anyway, back to this lovely sticker book that doesn’t really have any stickers in it, but it has a lot of stamps that would love you to believe they were stickers. 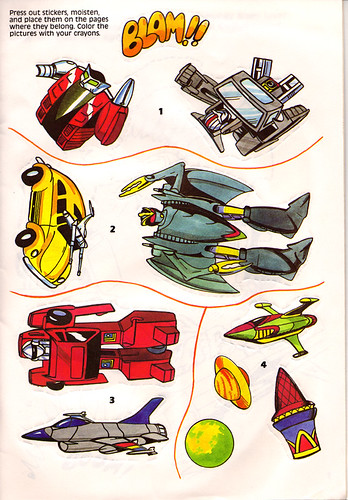 See, the Sticker Fun books, for those who never had the pleasure of losing hours of enjoyment to one of these, are basically slimmed down coloring books that have a bunch of missing images on each page that the intrepid reader/colorer can fill in with the supplied pages of “stickers” like these above. Like the instructions illustrate, you punch them out, lick the hell out of the back and stick ’em in the appropriate voids within the book. They’ve even handily numbered, though it ends up pretty meaningless as the voids in the rest of the book aren’t. Hey, is that one on the bottom right a Russian Faberge ice cream cone or the top to some strange Go-Bot infested building? 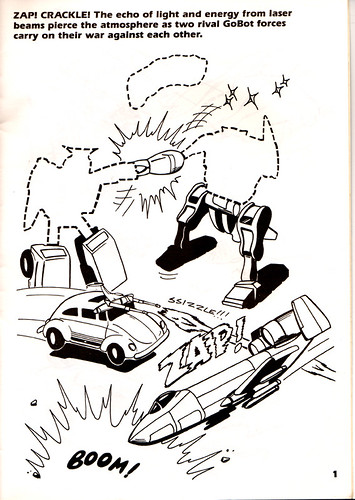 I think it’s kind of funny that the designers of this book tried to throw kids a curveball by supplying a sticker (the yellow VW Bug Bumblebee rip-off on the sticker page above) that is the exact same as one of the drawings on the first coloring page. How many kids stuck the sticker-stamp over the image and then crapped their pants in anger when they got to the next page… 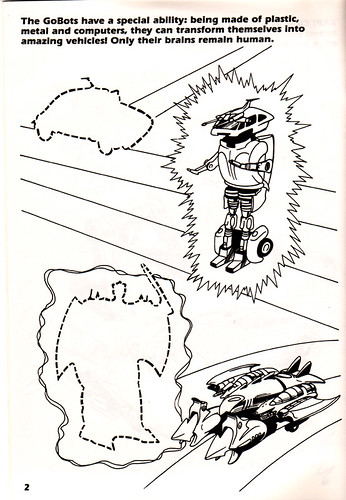 I guess that’s what they get for not flipping ahead. So, maybe I’m just dense and don’t remember this, but when the hell did the Go-Bots get human brains? I so need to see that cartoon again. 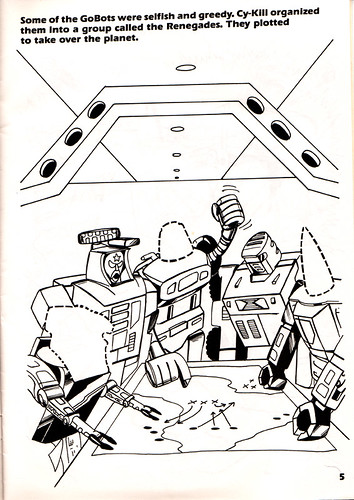 Man, just look at Cy-Kill shaking his fist in anger over that inane football playbook attack on that nameless chunk of land. 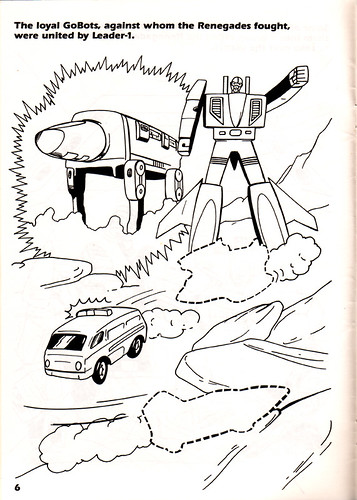 I never had that one giant Go-Bot command center, the one that looks like the equivalent of an AT-AT’s robo-dog, if giant imperial troop transports had dogs. I did have a couple different Leader-1’s that I loved. 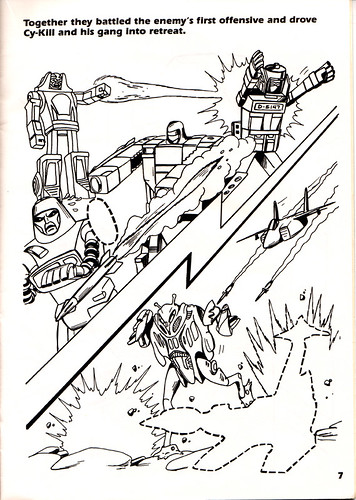 It may just be me, but having one of the sticker voids as Cy-Kill’s shoulder/wheel just seems kind of lame. I don’t know. He sure is sweating that missile blast though, phew! 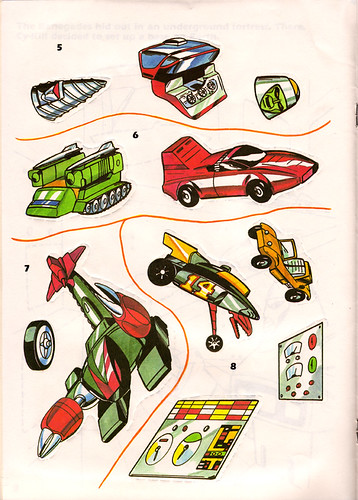 I wonder how many kids bucked the system and just stuck these in their sticker collection books. I’ll be honest, I’m tempted to do that right now, but I’m not sure if I’m bucking the system or just super curious what 20 year old dried stamp glue tastes like. 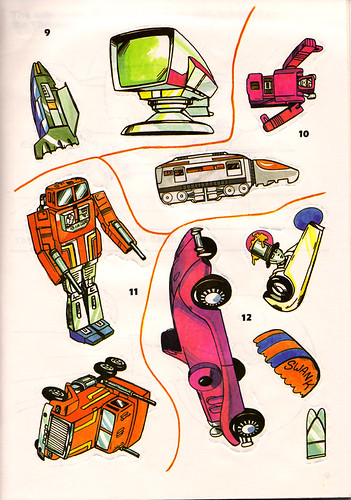 This trip though the Go-Bots Sticker Fun book wouldn’t be complete without a thumbs up from that one gimpy good guy Scooter, a hoity toity Go-Bot with a top had getting some sort of crap thrown on him Three Stooges style (the blue disc in his hand is a plate, the corresponding coloring book page has him in the middle of a food fight, you know in a battle for the planet and all), and an awning sticker that says Swank. 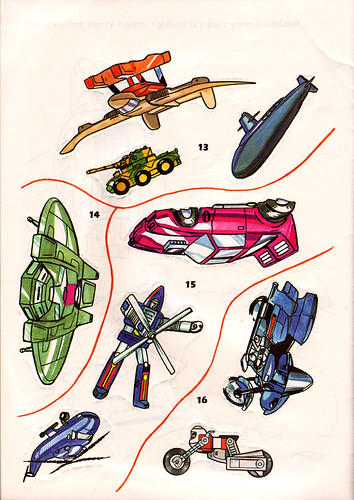 More sticker/stamp goodness. I used to love that flying saucer Go-Bot, mostly because I never got the Cosmos Transformers figure that I really wanted, and it was the closest thing to it. 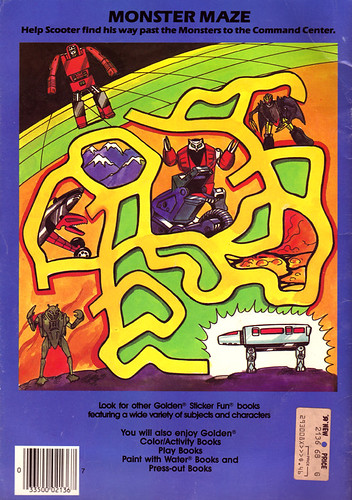 You know, that has to be the worst maze coloring book activity I’ve seen since that one lame connect the dots I reviewed a few weeks ago. If robot monsters eat Scooter because he can’t find his way through that, he truly deserves it.

So thus ends another riveting entry in this in depth series on 80’s stickers. Won’t you join me next week when I take another dip into the shoebox full of 80’s sticker-y goodness.