In trying to keep up with some DVD on TV news for 80’s cartoons series I stumbled upon this little gem. 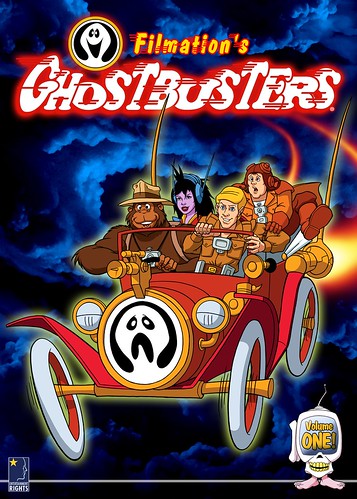 I first came across the Filmation version while visiting family on vacation one year. I was bored and was shoved into an empty living room while the adults blabbered, which was cool because there was a TV with cable and it was time for the USA Cartoon Express or something. Well the Ghostbusters cartoon popped on and I couldn’t believe my eyes, I thought that the cast had changed or something, like they pulled that gag that Charles in Charge pulled on me when the entire family disappeared on the first episode of the second season and was replaced by a bunch of Brady Bunch rejects. Poor Scott Baio.

Anyway, after that I’d always been curious about the show and actually didn’t find out until just recently that the cartoon was based on a live action show from the 70’s while watching trailers on the D&D DVD set. Just goes to show that I think I was born a few years too late because there is so much stuff from the 70’s that I missed, shows like Ark II, Space Academy, Isis, Sigmund and the Sea Monsters, etc., etc., etc. that I think I would have loved. But then that’s also the beauty of DVD. Can’t wait to watch this out when it comes out.

Who’s the baddest Mofo Low Down in this Town?