You know, if there were an award for the best company producing and distributing DVD sets in North America I would have to say that hands down, BCI Eclipse deserves it more than goth kids who cut themselves deserve a barrel full of happy face band-aids. Out of all the 80s TV on DVD sets I’ve purchased (hell of any from any decade) BCI has consistently brought out fun shows in unique and beautiful packaging at a very low price point. Just take a look at one of the He-Man sets with their vibrantly colored foldout digipaks, high episode counts (at least 32 episodes per set), the small color prints included in each set, and all for about $25-$35 depending on where you shop. And that’s just the packaging. Their DVDs are also crammed full of trivia, documentaries, a slew of episode info, not to mention a few easter eggs here and there.

I recently received the complete Dungeons and Dragons cartoon DVD box set that was also released by BCI under their Ink and Paint imprint and it’s just more of the same. The set is really gorgeous and it’s chock full of everything you’d ever want from this cartoon. The set itself was designed to look like the core rulebook set from 1983, the same edition that came out when the cartoon premiered on American television. It’s also set up like a box set (think shoebox) instead of the more normal slipcase, but inside is the same sort of foldout digipak that BCI and most other slipcase DVD sets come with. 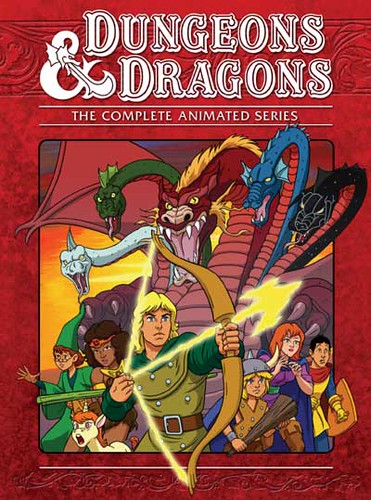 This set contains the complete cartoon series, with all 27 episodes from seasons 1-3, a 30 minute documentary with interviews from the show’s creative staff, a bunch of alternate footage (including the three different versions of the show’s opening credits), a fan film, as well as a special treat for fans of the show, a radio play recording of the never produced final episode of the show that gives some closure to the D&D cartoon story. The set also includes a cute little hardbound D&D role-playing sourcebook that has player info for all the characters and items from the cartoon.

It’s attention to detail like this that shows how much BCI cares about the fans and knows that at the end of the day it’s fans of the show that are going to be plunking down hard earned bucks for the set. Other companies tend to take a situation like that and flip it so that they can make the maximum amount of money off of the least amount of DVDs sold. Take for instance the DVD release of the Adventures of Brisco County Jr. from Warner Brothers. It was a short-lived show with a niche fan base, and therefore probably a small audience on DVD, so they put a very sparse set together that has a $100 MSRP. Rhino Home Video did the same thing with a number of shows including Get a Life, Jem, G.I. Joe and Transformers, all of which had outrageous price points and very little in the way of packaging or extras. At the end of the day, I think it’s because most companies produce product that they expect to sell to the general public, when they should have a more specific audience in mind.

Anyway, as far as the cartoon itself goes, I think it holds up rather well which is a credit to the creators and writers of the series including Mark Evanier, Jeffery Scott, Michael Reeves and Paul Dini. Like He-Man, this was one of the first shows that brought action elements back into Saturday Morning cartoons, which made it both fun and exciting. Its shows like this that would really pave the way for the more intelligent non-comedic action cartoons of the 90s and beyond like Batman and Justice League. If you’ve never had the opportunity to catch it, the show is about six kids who get pulled into the fantasy world of Dungeons and Dragons while riding a roller coaster of the same name at a theme park or carnival or something. 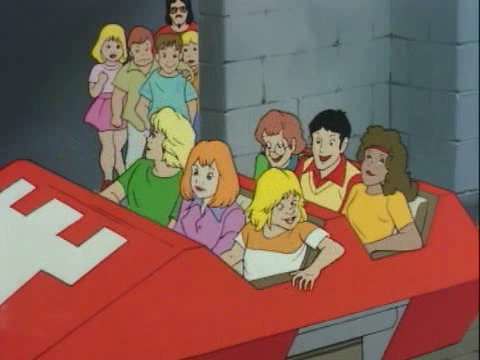 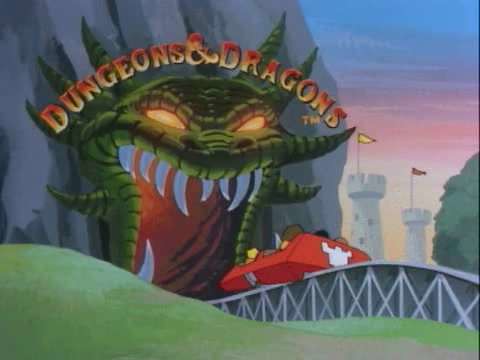 They each end up with special powers, armor or weapons that represent various classes from the Dungeon and Dragons world, the Ranger (Hank, voiced by Willie Aames of Charles in Charge and Bibleman fame) with his energy bow and arrows, an Acrobat (Diana, voiced by Tonya Gail Smith) with her resizable bo-staff/javelin, a thief (Shelia, voiced by Katie Leigh) who has a nifty invisibility cloak, the cavalier (Eric, voiced by Don Most of Happy Days fame) who has a nifty shield, the Wizard, (Presto, voice by Adam Rich of 8 is Enough fame) who gets a hat that he can “pull” magic out of, and a barbarian (Bobby, voiced by Ted Field III) who had a bitchin’ club and an almost annoying pet unicorn Uni (voiced by Frank Welker, the man responsible for voicing two of my all time best Transformers voices, Soundwave and Megatron.) 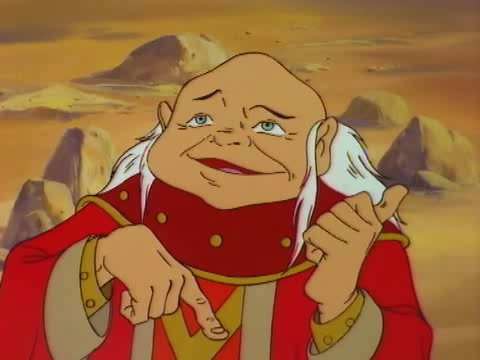 Together with the Dungeon Master, the kids are fighting against Venger (voiced by Peter Cullen, who voiced Optimus Prime on Transformers), an evil tyrant set out to ruling the D&D lands. I always dug Venger because he rode on a Nightmare and had that really disturbing single horn on his head. He always reminded me of another screen villain, the Source of All Evil from Time Bandits. 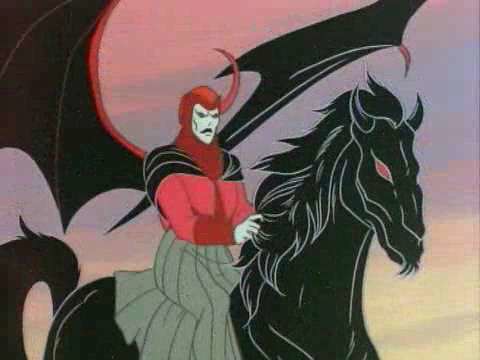 What I think is pretty awesome about this show is that it manages to capture a very specific feeling and area of pop culture from the 80’s, that of book and dice role playing as well as Saturday morning cartoons (which in the 80’s had a much different feel from the Saturday morning cartoons of the 70’s.) Like I said above, and can’t seem to stress enough, that the box set is beautiful and at about $35, is the perfect price for a nice nostalgia DVD set like this (end product gushing and pimping.) 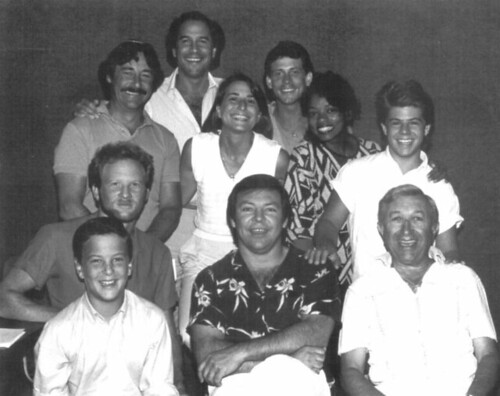 I’ve got a lot of fond memories of watching this show, most of which revolve around getting up early on Saturday mornings, feigning sick to get out of soccer practice, and then vegging out to this show with either a bowl full of Chef Boyardee mini raviolis or Capt’n Crunch with Crunchberries, dry because I hated the damn Soggies. I also remember being completely ignorant of the table top role playing game, though I did have a couple of the D&D action figures, namely the Warduke and Strongheart. I think in my silly little mind world, the Warduke figure was actually more at home in the Mad Max Beyond Thunderdome world than like a He-Man type world, what with his half on, half naked costume and evil red eyes. I don’t know.

Pretty soon we can also look forward to the BCI Ink & Paint release of Bravestarr which will hopefully be just as beautiful and chock full of extras.