You better not be back there jackling off to the Japanese comcis, I swear to God…

I pretty much grew up a big fan of comic books, though it’s one of the many addictions I’ve had that has wanned over the years.  But in the interim, I’ve sort of become a movie buff, so where the two meet, I’m usually there.  I remember in the mid 90’s, before comic book movies were so common, that there would be nothing better than like four or five CB movies a year.  Little did I know that this would soon come to pass, and that it would suck so much ass, and that, well I really can’t think of a way to end this sentence with another rhyme. 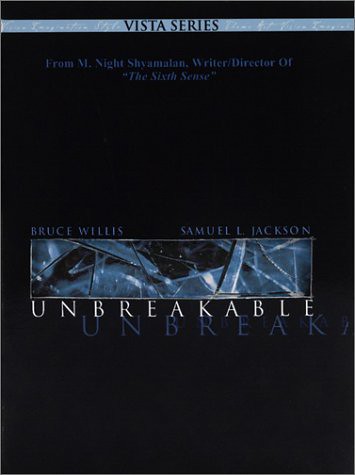 When I first saw the trailer for Unbreakable, like everyone else in the world, I had no idea what the hell the movie was about, only that it seemed very much like the Sixth Sense, which I really dug, so I was kind of excited.  I had no inkling that it would end up being a freaking comic book movie, and in my stupid opinion, one of the best to come out in this decade of super-crap.  I went to see this in the theater with my girl Carrie, and we were both pretty blown away.  Well pretty blown away except for the ending, and it’s not the twist I have a problem with, just the stupid-as-all-hell Animal House freeze frames and credits.  What in the hell was he thinking?

Anyway, this flick, or more precisely, this DVD is kind of important to me because it was the first DVD of my current collection.  I had picked up a few before this, but that was during a time when I typically sold all my CDs and DVDs to make back money for rent and utilities and junk.  So when I picked this up, along with my first DVD player (I had always mooched off my roommate before then), both with that stupid $300 tax refund that Bush sent out to everyone, it became the first of my concrete, "never going to sell", collection of DVDs.