I first came across Bottle Rocket while working at a grocery store after high school.  Every once in awhile I chipped in and manned the video rental desk and for my troubles the video manager let me take home the huge box of rolled up movie posters we received monthly to advertise the new flicks coming in.  She didn’t use them because we didn’t have room to put ’em up so I got to keep them.  Pretty much from 1995 to 1998 every room I stayed in, over like the four apartments I lived in were practically wallpapered with movie posters. 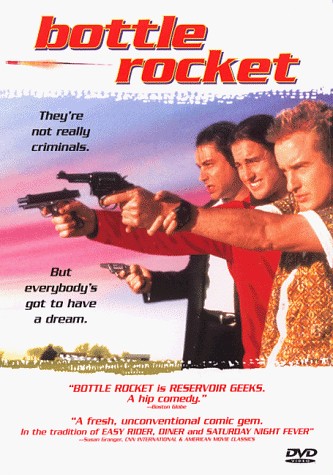 One of these posters (same as the DVD cover above), which my one friend Jeremy had commented on while flipping through the stash we both had (he also got loads of posters from a different store), was for this flick that neither of us had actually seen in our respective video rental places, Bottle Rocket.  Both of us had seen and loved both Pulp Fiction and Reservoir Dogs, and from the poster this flick looked like more of the same, if not maybe a little more indie.  We both wanted to see it but like I said it wasn’t convenient because we couldn’t rent it at our stores.

I ended up reliving a scene from Clerks, the one where Randell (who works in a video store) ends up going to a much larger chain video store to rent a movie because his store is so shitty.  I found myself browsing through Home Video, this almost obnoxiously large video place (it had two floors and about three times the floor space as a Blockbuster and twenty times what our stupid grocery store had, and in this Shang Ra La of a video rental place I came face to face with Bottle Rocket on a shelf in the new release section.  I figured I’ve give it a shot since I didn’t make it into this place that often and that movie poster I had at home intrigued me.  (Did I just take four paragraphs to explain why I rented a video?  Yes I did.)

Anyway, after I finished the final frame of the movie I was in love.  For one brief shining moment I’d found a film that, from beginning to end, that exemplified my sense of humor almost perfectly.  It also introduced me to the brothers Wilson (Owen, Luke and Andrew) and the directing talents of Wes Anderson.  I don’t think there’s a frame of this film where I’m not either smiling, laughing, or just sitting amazed by how beautiful a film can be when the visuals, tone, and music gel together just right (as in the chase scene though the building near the end of the flick between Dignan and the cops set to the Rolling Stone’s 2000 Man off of Their Satanic Majesties Request album.)  I mean the yellow jumpsuits, "escaping" from the hospital, their first robbery, the bird-call signals, Mr. Henry’s karate lessons, all of this hits this absurd yet totally natural and subdued sense of humor that I find amazingly funny.

This flick, like Zero Effect, is one of the films I find myself trying to show to everyone I know.

Swimming in the League’s Moneybin…