I don’t mean to sound bitter, cold, or cruel, but I am, so that’s how it comes out…

I first came across Bill Hicks stand-up comedy back when his One Night Stand aired on HBO for the first time.  I was way too young to appreciate anything other than the most obvious of his jokes, but I found him funny and always wondered when I’d see more, or if he’d pop up in movies or TV like some of the other comedians I loved at the time.  Then I promptly forgot about him.  I was young, sue me. 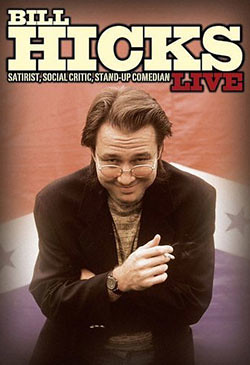 Then flash forward to Shawn just out of high school and getting his first CD player (I was a late bloomer.)  I was browsing the local Disc-Go-Round, thumbing through the T’s, skipping over 60 copies of 311’s self titled album, wishing there were more They Might Be Giants albums to pick from, and then settling on a used copy of the new Tool album, Aenima.  I hadn’t heard much, but the disturbing claymation videos were kind of cool, so I figured "What the hey."  I got home, popped the disc into my new player and sat back to the soothing easy listening that is Tool.  When I wasn’t using the gimmicky Lenticular cover to look at all the dirty pictures int he fold-out cover, I noticed that one of the pages had a painting of a guy I kind of recognized.  Bill Hicks?  Yup.  Big influence on Tool, and this album in particular had both a eulogy and some snippets in one of the songs, Third Eye.  Couple of months later, gone and forgotten again, not that I wasn’t listening to the Tool album anymore, but I tended only put it on when I was pissed and needed to work out some aggression, in particular to the Hooker with a Penis song.

Anyway, flash forward to about two years ago.  I was browsing through a discount overstock bookstore in Commerce, GA, in the Arts and Entertainment section when I found a copy of American Scream: The Bill Hicks Story for $2.  I’m a sucker for discount books, and I had just started to get into reading biographies and junk.  It sat on the bookshelf at home for a few months before I got around to cracking the cover.  Holy crap.  I was pretty blown away by the life of this guy who I’d just barely known about from some songs and one 30-odd minute stand-up performance.

I immediately sought out his CDs and any DVDs or video I could find.  All the CDs were still in print, so I picked up a couple of those, but there wasn’t much in the way of DVD.  The best I could find was an on-demand copy of his One Night Stand via my local cable company, which was a start, but not really what I was looking for.  I gave up a little while later with no hope of finding anything.  There just aren’t that many comedy performances available on DVD.  Sure, you can find some of the bigger names, or some of the more current fare, but as for a nice backlog of titles, there just isn’t all that much.

Well, apparently my re-introduction to Bill Hicks fell on some sort of karmic time line because right about when I gave up hope, around Christmas of 2004, while shopping for various odds and ends for the family, I stumbled upon the above DVD, Bill Hicks Live.  I promptly bought up both copies they had in Best Buy and went home to watch it before sending off the second copy to my sister for Christmas.

The DVD has a good portion of his official live performances on it, from the HBO One Night Stand, to both Relentless and Revelations, as well as a decent documentary.  All in all it’s about 3 hours worth of genius stand-up and insights.

Saturday Supercast Episode 21: Deconstructing He-Man and the Masters of the Universe!