I played with the Ween!

You know how every collection usually has a couple of things in it that just don’t fit?  Well It’s Pat is one of those things for my DVD collection. 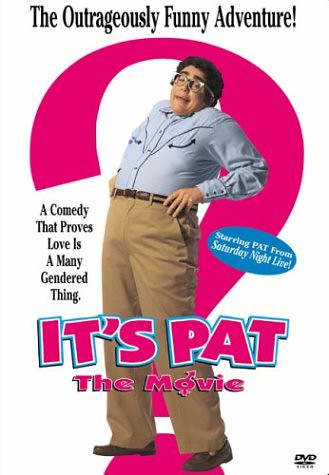 For the most part I really can’t stand this movie even though I really dig Julia Sweeney and I didn’t mind the SNL sketches this flick is based on.  I think this flick’s main flaw is that the joke was overdone way before it was even considered as a movie and if I’m remembering correctly, even Julia Sweeney didn’t want to do it anymore, but did for the money.  Even with Dave Foley of the Kids in the Hall, Quentin Tarantino (who helped write uncredited), and a cameo by Mitch Pileggi (he of X-Files and Shocker fame) to help it along this flick just flops from annoying to stupid to boring.

But I own it.  Part of the reason is that I bought it early on in the collection, before Wal-Mart $5.50 bins and DVDs came down in price, when finding a DVD for under $15 was a rarity.  Our local Media Play had it discounted down to $4.99 and I was tempted.  But why exactly?

Well, in a nutshell, this flick has a rather long cameo by the band Ween, well at least Gene and Dean Ween (Aaron Freeman and Mickey Melchiondo respectively) and Andrew Weiss, which is my all time favorite band.  Not only do they get to have a Ween-mobile, but they also have a nice bit of concert footage (with nice versions of Pork Roll Egg and Cheese and Don’t Get 2 Close 2 My Fantasy) and they are the first who truly get to see what sex Pat is.  This was years before the Live in Chicago DVD hit, so it was one of the only chances I had to have a visual representation of what the guys looked like on film.