Well, it’s an all-new week in an all-new year, so I guess it’s time for an all-new type of 80’s sticker to talk about.

Around 1985-86 is when collecting took on a whole new meaning in my little world. With my introduction to Garbage Pail Kids my focus shifted from being obsessed with toys to being infatuated with various types of paper goodness. It started with GPK’s, and then moved on to baseball cards and collectible sticker albums (first baseball related, then albums based from the various cartoons I was into.) Sometime in 1986 the 7-Eleven in my neighborhood started selling Panini Sticker albums and stickers.

For a quarter you could either get one of the magazine-sized empty sticker books or a pack of 5 stickers. Though baseball cards were addicting, the sets were so big (topping out at about 700 cards per series) that it didn’t seem like that big of a deal if you couldn’t find a 1987 Topps Ozzie Smith, but these sticker books were a million times worse because when ever you flipped through the book, there were all the empty slots starring at you. Combine this with the power and freaking weird appeal of stickers (remember kids, it’s just glue on paper) and it became a full-blown eating-up-all-my-allowance obsession.

The only thing worse than the Panini Baseball Sticker books were the cartoon sticker books because these told a story through the pictures. So it became a matter of getting to see all the pictures. Once again, like the whole glue on paper thing, for a kid to read a book and not see any pictures, or to have pictures missing is a little private hell. Go on, go read a story to a kid and don’t show them the pictures. I’ll wait. Do you see that look of hurt and rage on their cute little faces? Crazy huh?

I remember this being so frustrating that I couldn’t bring myself to get more than a couple books growing up. It was just too expensive of a hobby. I think, other than a couple Baseball albums, I had the Transformers the Movie and Thundercats albums. When I was picking through eBay looking for stickers for this column, I was sort of unsure what to try and buy. My first thought was to try and find complete or semi-complete albums to share, but, as I soon found out, these albums are crazy expensive.

First of all, because Panini is an Italian company that specializes in Football (soccer) sticker albums, the majority of its products are sold in Europe. Most of the auctions were in the UK and that means shipping would be a bitch, not to mention that semi to complete sticker albums are fetching upwards of $100 a book, and that’s stupid crazy. Then I was thinking that I could get some loose stickers and an empty album, but empty albums are pretty rare as well. I ended up finding an estate sale that had a bunch of singles from various American cartoon sets.

Now when I received the stickers, I was confused because they had a different company logo on them other than Panini called Diamond. I’m not sure if Diamond is the US version of Panini, or if it’s just a similar type of collectable sticker book, but I seem to remember Panini and it’s little jousting knight logo more than Diamond. Anyway, without further ado, I present a bunch of collectable sticker album stickers from the cartoon Jem! (Remember, you can click on the images to larger for your sticker viewing pleasure…) 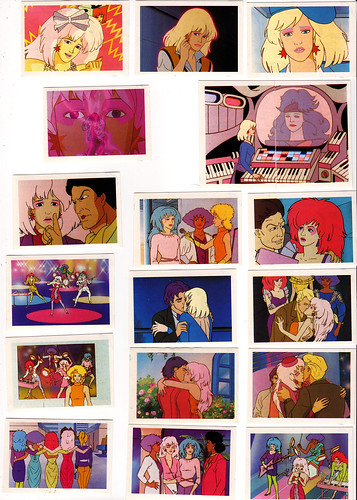 This first set of stickers features Jem and the Holograms in their various forms. If you are unfamiliar with the cartoon, it was about a young girl, Jerrica Benton, who inherited her father’s music empire Starlight Music (as well as a prototype entertainment synthesizer machine known as Synergy) and is trying to fund a house for foster children, the Starlight House. Her main nemesis is a man named Eric Raymond who ran Starlight Music before Jerrica took control, and the Misfits (not to be confused with the punk-hardcore band led by Glen Danzig in the late 70’s early 80’s), an evil all girl glam punk band that answers to Raymond’s every beck and call.

Jerrica, through the power of the awesome magic synthesizer Synergy, can transform into Jem, who is outrageous, truly truly outrageous, and the worlds most popular singer. Backed by an all girl band of her friends, the Holograms, Jem fights the good fight of fashion sense, foster children and corrupt record execs, not to mention keeping the love of Rio (her purple haired hunk boyfriend), and keeping her duel personalities secret from the world.

Of the 255 stickers in the set, these really are the cream of the crop. I tried to get ones that exemplified the series, Jerrica (who touches her star earrings to turn into Jem), the Holograms, and Synergy as well as some rocking shots and such. Most of the stickers are horrible screen caps that are either blurry or have the character’s backs turned. I tried to get as many shots of Jerrica/Jem kissing various guys to show just how much of a slut she really is. 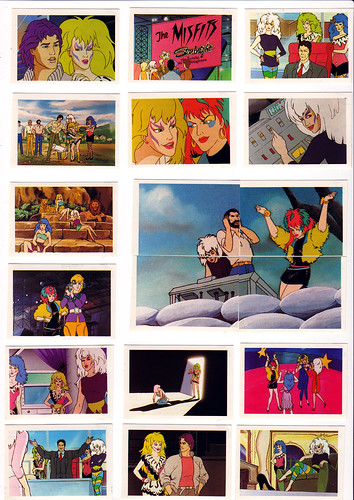 This second set is all about the Misfits, who were my favorite, even as a kid. I mean rock and roll isn’t about being nice and raising foster kids, it’s about debauchery and being evil sluts. Unfortunately there weren’t any sweet catfight stickers, at least not in the ones I was able to procure, though there is that one cool shot of Jem at the feet of the head Misfit chick. I was always partial to the one with the blue hair though.

I wish this cartoon would come back into print. Rhino really fumbled the ball when they released it at a $75 price point. Who the hell is going to pay that much for this cartoon?!? Anyway, next week on Peel Here, I’ll get technical on what does and does not constitute a sticker with a little help from the Go-Bots!

Peel Here #79, the only variation on baseball where the managers don’t threaten the umpires, because they’re probably vampires!