I’ll shoot you. Really, I will. I have a gun and everything…

Of all the films that I own, the ones that I tend to love owning the most are the little gems that slipped through my fingers when I first encountered them.  For instance, even though I’m a huge fan of Night of the Living Dead and Dawn of the Dead, my favorite of the Dead trilogy DVDs is Day of the Dead because I had overlooked that film for years before finally buying it and falling in love with it. 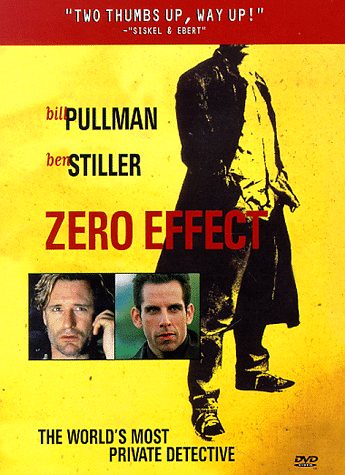 One DVD in this category that sticks out the most in my mind is Zero Effect.  I remember when this flick came out in theaters I passed it up even though I was a pretty big Ben Stiller fan at the time (having loved Flirting with Disaster and Reality Bites) because of all the negative press it seemed to be getting.  Then when it came out on video I happened to be working part time in the video rental department of a grocery store when I passed up seeing it again, this time because I’d heard that it was dumb.

I didn’t end up seeing the flick until one night on TV a year or so ago.  My cable provider had been offering a freebie deal on their new service of ordering older flicks on demand, and the only flick I hadn’t seen was Zero Effect.  I figured what the hell, it couldn’t be as bad as Zoolander, so I gave it a try and was completely blown away.  Screw Ben Stiller, this flick is all about Bill Pullman, written specifically for him in fact by the director/writer Jake Kasdan.  Daryl Zero is probably my favorite screen detective of all time.  He’s a little bit Sherlock Holmes, a little bit Hunter Thompson, and just a tad Buckaroo Banzai.  Like Buckaroo, Daryl Zero has one of the best obvious yet deep quotes of all time:

If there was ever a movie that screamed to be serialized into a TV show, it’s Zero Effect, and in fact Kasdan produced and directed a pilot for the series, though for some reason he chose a different Daryl Zero, Alan Cumming (who is a perfectly fine actor, but he’s no Daryl Zero.)  This is one of those films that I wish would get the 2 disc special edition slipcase treatment from Warner Brothers.  They could include the pilot for the series, and I’d love to see a making off or at least interviews with the cast, but it’d never happen.

I ended up watching the flick like two more times that weekend, and then promptly bought the DVD off of Amazon.com.  It’s one of those films that I make everyone I know watch because they’d probably always pass it up like I did.

Art & Story interview with the voice of Flint, Bill Ratner!

Michael Knight & the Mystery of K.I.T.T. and the Blue Prowler!