I’ve brought up the movie nights my friend Kevin and I hold once a week a couple times here, so I decided to bring up a movie from another list we’ve done recently.  The first list of flicks we came up with to watch was horror since Kevin hadn’t seen any up until then.  For our second list we decided to tackle a genre both of us were unfamiliar with, Westerns, for one so that we could both watch movies we’d never seen before, and two, to see if we could, since neither of us were fans. 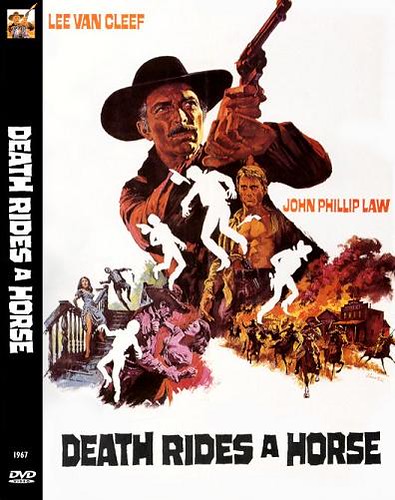 Since I put together the first list for the most part, Kevin took the reins on the Westerns.  We both felt it should be a little more in depth than the horror list (which in the end felt a little weak), so this one topped out at 48 flicks, in no particular order:

Stagecoach, Red River, The Searchers, True Grit, High Noon, How the West Was Won, Vera Cruz, Butch Cassidy and the Sundance Kid, The Man Who Shot Liberty Valance, Destry Rides Again, The Man From Laramie, My Darling Clementine, The Treasure of Sierra Madre, The Magnificent Seven, Westworld, El Mariachi, Desperado, Once Upon a Time in Mexico, Posse, The Outlaw, Lust in the Dust, Duel in the Sun, Tombstone, Young Guns, Young Guns II, Unforgiven, Django, Django Kill! If You Live, Shoot!, My Name is Trinity, Fistful of Dollars, For a Few Dollars More, The Good, the Bad, and the Ugly, Once Upon a Time in the West, The Outlaw Josey Wales, High Plains Drifter, Shane, Dances With Wolves, Rio Bravo, The Wild Bunch, Blazing Saddles, City Slickers, Gunfight at the O.K. Corral, Maverick, Silverado, Shanghai Noon, Last Man Standing, and Dead Man.

I’ll be honest, I was not looking forward to most of those flicks.  When I was growing up, securing television watching time on the weekends was hard because my dad got up at the crack of dawn and started watching westerns for hours on end.  It got to the point where I hated them, thinking that for every second a western was on TV, there must be a much better cartoon on another channel.  Anyway, we were both pleasantly surprised to discover that we actually really dug most of the flicks, the Spaghetti Westerns in particular.  Well while we were making headway on the westerns list, I was putting together my Kill Bill reference list for us to watch at the same time to sort of break the westerns up a bit.  It turned out that I had a western on it, Death Rides a Horse, and I was so happy to be contributing to our western experience beyond the list that was already made.  The flick has a similar plot to Kill Bill, as well as shared Morricone music, and the quote about revenge being a dish best served cold.  Well, before I had a chance to get to it, Kevin ended up sticking it on the Western list as a late comer when we found out how much we dug the Spaghetti Westerns we were watching.

Out of all the Italian westerns we watched I think I dug Death Rides a Horse the most, mainly because Lee Van Cleef is awesome and there’s a lot more humor in it than some of the Leone stuff.  It’s also got one hell of a fun plot and some of my favorite Morricone music as well.  Unfortunately, all of the copies available in America are truly shit.  When we watched the flick, it was a copy that we rented off of Netflix and I don’t think I’ve ever seen poorer DVD quality ever.  It was fullscreen, way too dark, scratchy, the sound was so garbled that it was inaudible, not to mention the fact that because the resolution was so bad you couldn’t read the subtitles.  What’s funny is that beyond all of this, I still loved the film, which says a lot about it.

I did a search on the interwebnets for a better copy of the flick and finally found one on eBay that was a bootleg of the Japanese release.  I’ve picked up my fair share of bootlegs in the past, but this was the first time I ever found one that was so good that I would rather have it than an official release.  It’s widescreen, the print was color corrected and cleaned of scratches and stuff, the sound is phenomenal and there are even some special features (though they’re in Japanese.)  It seems to be available on Amazon right now too…

Wax Paper Pop Art #29, Assembling some of the Avengers…

I’m obsessed with the LoEB’s return!