Damnit Minmei, why don’t you just shut the fuck up!

I haven’t talked much about any of the TV shows I own yet.  I figured a good place to start would be Robotech since it’s one of the few shows that I actually did actively collect before I became obsessed with DVD. 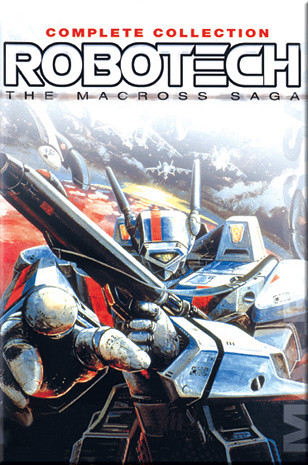 Robotech is one of those weird shows that I missed out on as a kid growing up in the 80s.  I think I saw one episode at some point and was completely uninterested because for the entire 25 minutes all I saw were characters lounging around and talking.  There were no fight scenes, planes, or giant robots drifting through space.  When I see a show like this and the bumpers have a transforming jet getting ready to shoot its laser, then I expect a little of this in the show.  At least throw me a bone and have the characters lounging around and talking by the giant robot jet things or something.  I guess I picked a bad day to watch.

Little did I know that while I avoided the show and the toys after that, that I was actually secretly playing with one of those giant robot jet things.  See, I had no idea that Hasbro (or Takara in Japan) ripped off the Japanese version of this show (well kind of, that gets a little complicated, but I’ll get to that in a minute) and used the Veritech fighter design for the Jetfire Transformer toy (even though the character in the show looked completely different.)  What I find kind of funny (though I’m sure anyone reading this by now is putting a gun to their head) is that Jetfire was my poor-man’s G.I. Joe Skystriker, since I was never able to acquire one of those.

As for the rip-off, I’m not exactly sure about the back story of this.  I assume (with the inane break down of that word intended) that Takara swiped the design of the veritech fighter for Jetfire because it looks exactly like one (though on the Transformers show it looked nothing like that.)  Hell, for all I know it’s all the same company in Japan.  I guess it’s just a really well designed airplane robot though because I think there is even a version in Battletech, so who knows.

Anyway, years later when I was a junior in high school, my family moved from a house in the suburbs to an apartment in another city which moved me out of my current school district.  Since I was pretty tight with my friends at the time and my mom and dad didn’t want to stick me in a new school, they decided to lie to the school and drive me in every day.  I’d take the bus to my friends houses and stay over there until my parents got off of work later that evening.  I usually had about three hours to kill and often I’d end up at my friend Stephen’s house, which was empty because both he and his mom were at work.  So I’d spend the time watching videos and trying my best to tune in local channels on his old TV to get the afternoon cartoons.  The only channel that I could usually get to come in was a UHF station, channel 69 Atlanta, and during the afternoon the only thing on cartoon-wise was Robotech.  By some miracle I managed to catch the first series at the first episode and since anime was just starting to hit big in the 90’s I figured I’d give it a chance.

I was hooked from the first 15 minutes.  Basically the show is just one big space soap opera with occasional giant robot battles and a ton of cheesy 70’s style love songs, but like every other successful soap opera in history it manages to get into a person’s system like heroin.  You take your first hit out of curiosity and then find that you now need it just to feel normal.  I spent a good part of my junior and senior years following the show before channel 69 finally went off the air.  The first time through the series I managed to catch practically every episode of the first series (which I now know as Macross) before I was stunned to discover that the storyline then jumped to a different era with all new characters and surprisingly no giant robot jets.  Now the characters had bland robot tanks and fought a completely different enemy, but the story was connected just enough to keep me hooked.  Right when I was getting comfortable with the switch, the show changed yet again (from what I now know as the Southern Cross to the New Generation), and yet again it threw me for a loop.  I really liked this third series because the story was linked much stronger with the first and resembled it by bringing back the jets and adding something awesome, the Cyclones (human sized battle armor that transformed into a motorcycle.)

Just as I was getting used to this new series, channel 69 went off the air before the show had a chance to come to a conclusion.  Though I’d managed to tape a good portion of the 1st series episodes, I couldn’t believe that this was going to be all that I’d ever see of the show since no other stations had it and my local Blockbuster only had a few 1st series episodes for rent.  I was saved though because that’s when our local movie store in the mall, Suncoast, put up it’s first VHS anime section, which was primarily made up of copies of Vampire Hunter D, Akira, and many, many tapes in the Robotech series.  Though I didn’t have a job, and as it was my lunch money went to supporting my comic book habit, my friend Jeremy did and he started buying the series, tape by tape.  This is how I managed to finally watch the entire series from start to finish.

When it was first released on DVD, it was very similar to the VHS release in that it came out in individual volumes with about six episodes per disc.  So once again it became a long and expensive process to collect the series, but I did because even 10 years later I was hooked and needed my fix.  Luckily a couple years ago the series was released in affordable series sets, so I snagged both the Macross and New Generation sets.  I’ve never been a fan of the Southern Cross series, just too bland for my tastes.

I think it’s kind of funny though.  Now that I have all the episodes that I want I find that I’m suffering from a weird syndrome of owning TV on DVD.  Basically I find that when I own shows in season sets I end up never watching them. Like I feel that I can’t just watch one episode here and there, but that I’d have to watch them all, and typically that’d take a week or two which I never seem to have to spare.  Usually this is mostly for the non-comedy shows, since I can pretty easily pop in an episode of Family Guy or Kids in the Hall. 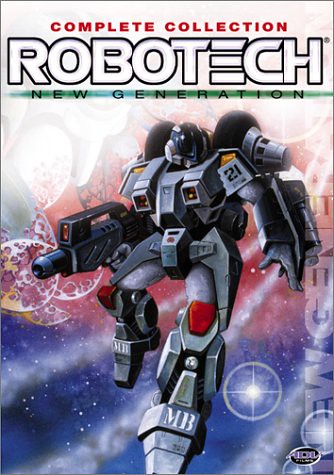 Peel Here #42, in which there is a surprising lack of Cobra stickers…