When I first started digging around on eBay looking for 80’s stickers to rescue from trashcans and garage sales everywhere I had no idea what I would find. I expected to find a lot of Topps sticker card sets and subsets, and hopefully a few unused stickers here and there but I just had no idea what I’d find. A lot I’ll tell you, in fact, enough that it’s almost kind of scary.

In the meager collection I’ve managed to scrounge together, the one item that still makes my head ache a little is this awesome example that if at least six people in the United States share a common interest, there will be a magazine supporting it. While looking for Punky Brewster stickers (I know they must exist, the show was just too popular not to have stickers) I stumbled upon this gem of a publication: 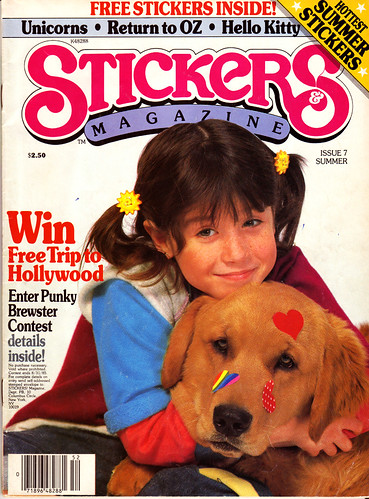 Yes, that’s right, Stickers Magazine, for the enthusiast who just can’t get enough information on stickers (which I fear is what I’ve become.) Holy Christ! How in the hell did an editor manage to fill this bad boy with enough information, even on a semi-monthly (or is it bi-monthly, I always forget how you say every two months with a hyphen) basis? Well, by taking a gander at this cover you can start to get an idea as we can clearly see that an interest in stickers obviously opens one up to interest in subjects such as unicorns, Hello Kitty and failed (though awesome) Disney movies. There’s even a cute balloon built right into the logo. Damn that’s precious. 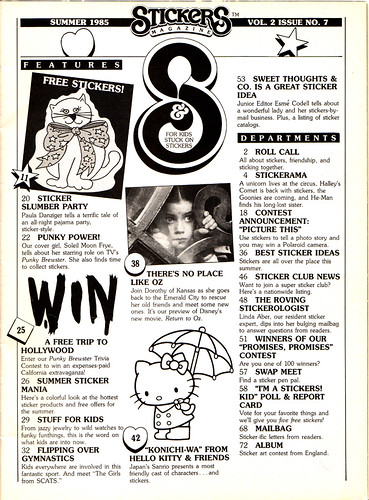 As we take a closer look at the contents of Stickers Magazine, Vol. 2, Issue #7, Summer 1985 we can clearly see that this magazine is very much intended for young girls as it uncovers the dirt on sticker slumber parties, gymnastics, Punky Brewster, and a bazillion other girl related topics. Now, I’m not being sexist or demeaning, I mean if you were to flip through a Summer 1986 issue of G.I. Joe the magazine I’m sure there would be riveting exposes on subjects such as “Collecting Frogs: Does it Indeed Lead to Wart Growth?” and dissecting the “A Horse Fell in the Mud: is it a dirty joke?” I’m just saying that if a boy found himself on the playground with a copy of Stickers, he better make sure that it’s tucked firmly inside of an issue of Thundercats Monthly. 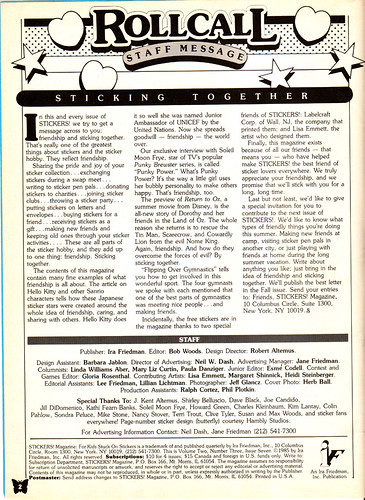 Remember that you can click on the pages to make them embiggened and readable. 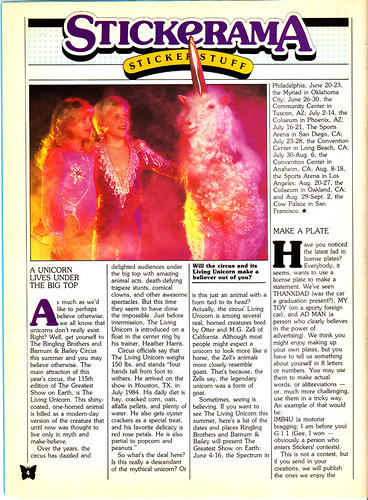 I’d be willing to bet that, that boy watched his fair share of She-Ra, which was conveniently advertised on the following page… 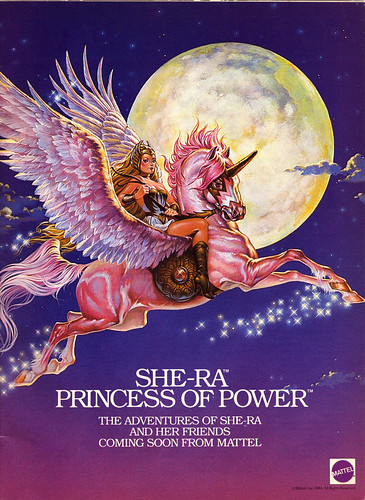 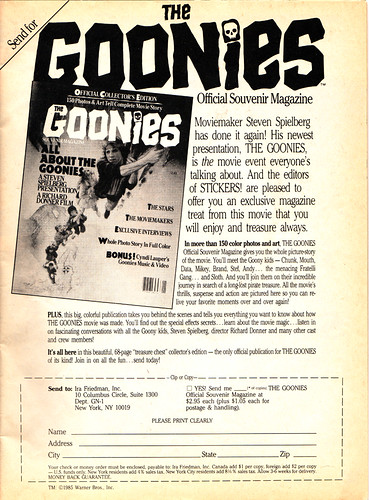 I was surprised to see that not only were the publishers responsible for the in depth Stickers, but they were also the ones responsible for bringing us the official souvenir magazine for Goonies. I wonder if they also did Karate Kid II? 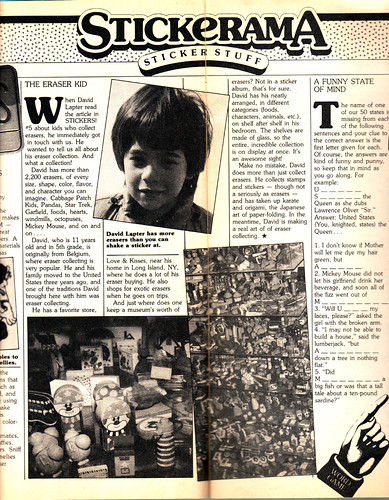 The above snippet was actually sort of enlightening as it sort of answered my question of who actually took the time to collect erasers in the 80’s from a post earlier in this year. I didn’t actually ask that question out loud, but it’s been something I’ve wondered about, and now I have a nifty column to explain it for me.  Apparently it’s European kids with plenty of time on their hands after all… 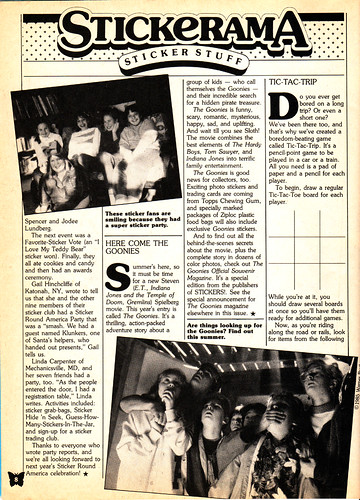 Here’s a taste of the pre-Goonies press courtesy of Stickers Magazine. 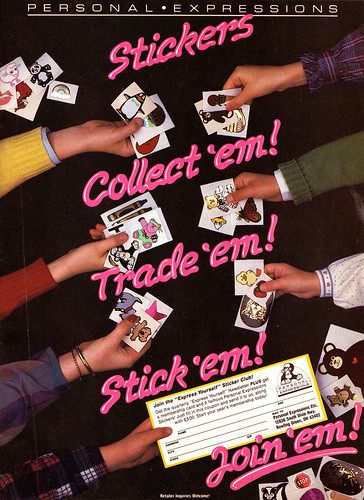 Personal Expressions Stickers ad. You can be sure that I didn’t spend any of my money buying these recently… 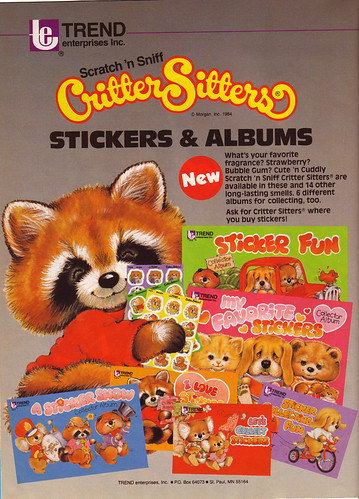 Trend Stickers ad (from the same company that brought you the most popular scratch and sniff stickers of the 80’s.) 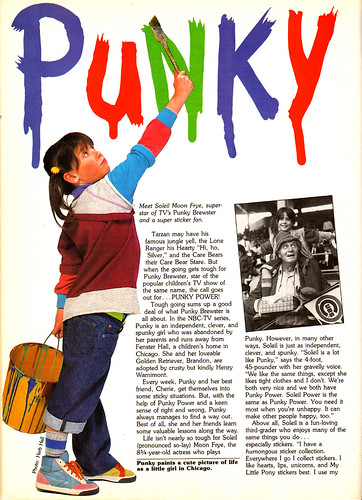 Would this edition of Peel Here be complete without a full article on Punky Brewster? I think not. Read on… 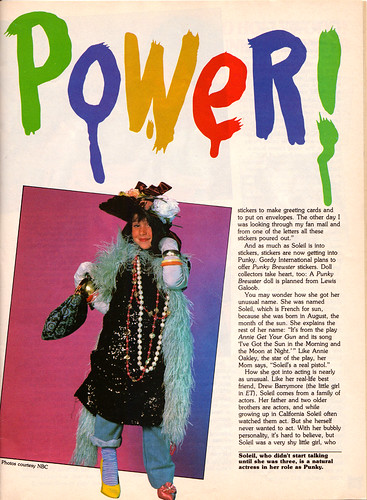 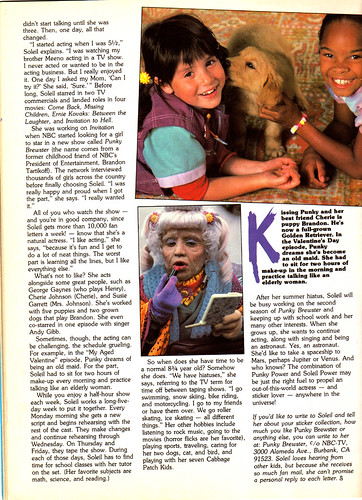 Sadly the gymnastics article didn’t make the cut when I was scanning this magazine in because well, there is only some much time in a lifetime and I don’t think I need to spend it scanning, color correcting and resizing a 20 year-old article on the merits of gymnastics. Or do I? 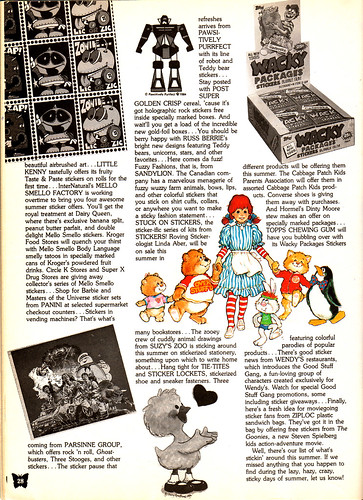 Here’s a fun coming soon page. Not only does it have some Ghostbusters info, it also has a blatant Wendy’s rip-off of both the Shirt Tales and the Get Along Gang. Fun! 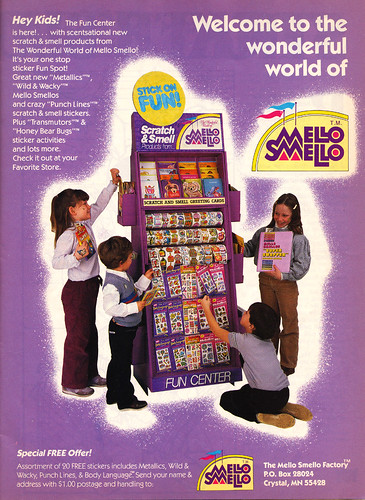 The above ad is for Mello Smello stickers, the bastard cousin of Trend scratch and sniff stickers. Though in retrospect I think I like the design on these puppies better than Trend, back in the day Trend was king bling and Mello Smello stunk. 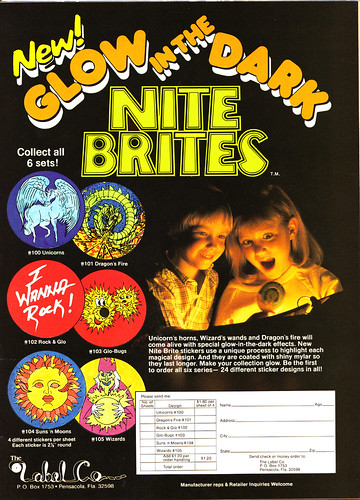 For the last scan of this amazing Stickers Magazine issue I present an ad for Nite Brites, a series of glow in the dark sticker sets that you could mail order for that look about as bad as most of the stuff you tend to get via mail order. I’d be willing to be most sticker snobs of the 80’s ignored stuff like this and instead attacked the Mello Smello, Lisa Frank, Trend, and Personal Expressions racks at local Hallmarks everywhere.

I’m not sure how long Stickers Magazine was around (though I have one more later issue to share), but it sure was amazing while it lasted. I guess. I don’t freaking know, I’m still in shock that there was a magazine devoted to stickers. I can say that I did not in fact get any of the free stickers promised as the chick who sold it to me used them and has since lost them (but managed to keep the magazine for 20 years, go figure) so I have no idea if they were super cool Punky Brewster or Return to Oz stickers, or some lame generic ice cream cones and penguins and junk.

I wonder if there is a magazine for people obsessed with 80’s nostalgia? I’d subscribe to that. Hey wait, I guess that’s kind of what I’m doing, just in a non-print form. Does this mean that in 20 years some kid who grew up reading this silly website will look back and repost my posts? Aw man, if you could only hear me laughing…

Next Week on Peel Here, Jem!