Nope, not really anything more than meets the eye…

First off, I hope everyone had a great time opening swag or whatever this holiday.

I thought I’d take a second in this post holiday bliss and share a coloring book I stumbled upon while trying to find a couple last minute gifts for some of Carrie’s nephews. Well, that’s not exactly true, they were for me, but they made great “fake gifts” for the boys. See they’re still at that age when they get their Christmas morning first (and because there is a divorce involved, first at many places) and when the adults are exchanging gifts they get kind of jealous, so it helps to throw a couple things their way to distract them.

I saw this coloring book in a Target $1 bin in Florida while I was on vacation this year, and ended up buying one this past weekend. First off, the coloring book amazed me because it’s just a cheap one-dollar book, but it’s also about the size I remember coloring books being when I was a kid, not the rinky-dink ones you find today. Then as I was flipping through it I realized that it was most likely drawn by someone my age that grew up in the 80’s. See the book is basically a Transformers rip off called Robots ‘N Action. 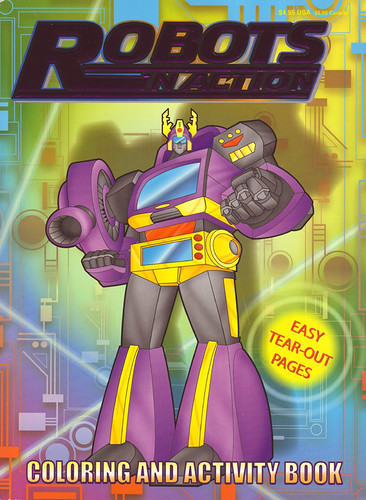 In fact one of the first pages has the outline of a very familiar symbol on one of the robot’s chests: 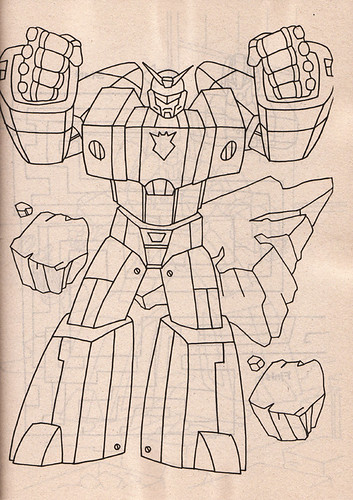 For the most part though, the book has the rest of the characters with more silly, less trademark infringing symbols and such as this guy here who is a great representative of the bad guys what with his skull and crossbones symbol (that’s actually more at home with Macross or Mechwarrior.) 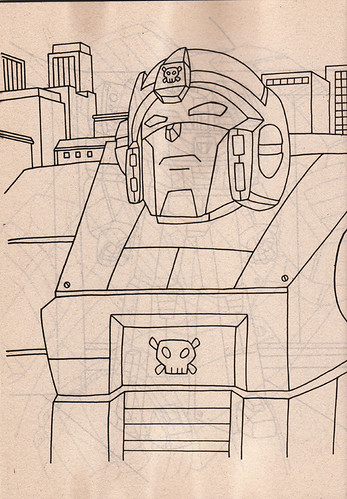 This page features both a girl robot (very rare in every universe) and the good guys symbol, which appears to be a Chinese or Japanese character, though it could also be gibberish. It would be awesome if it were the symbol for say sushi or cat or something silly like that. 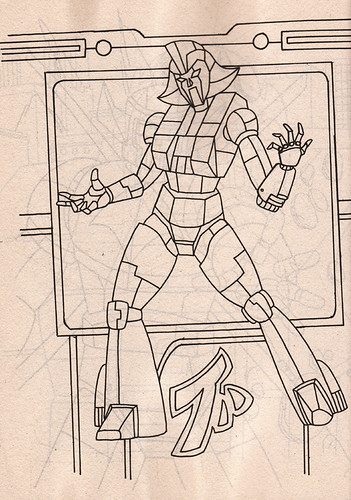 What struck me the most about this coloring book is that the characters are drawn in a very clunky looking G1 Transformers style, something that the newer shows and toys have updated (I say updated but it’s really more that it’s in a more modern Japanese style as opposed to the blockier style of the 70’s and 80’s, not as much of a conscious effort I guess.) So it’s as if the artist (or artists) were trying to bring back a little bit of their childhood memories in these pages. 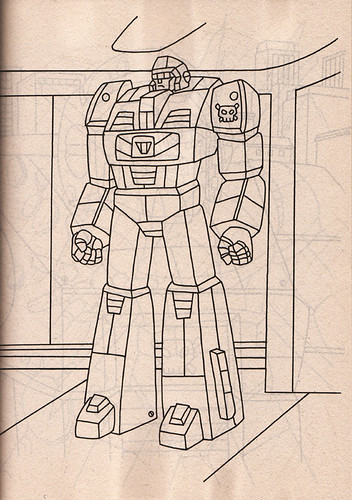 Though there is no story to back this up (there is no text what-so-ever in the book), there is evidence it’s trying to copy Transformers in other ways as well, what with this odd close up of a glowing rock that could very easily be an energy source like energon cubes or something. 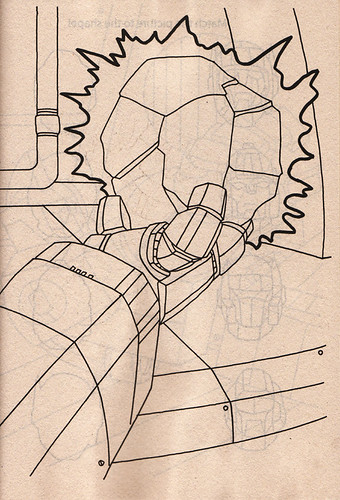 There is even a robot dog in the book that is a weird cross between Rush from Mega Man and Ravage from the Transformers. 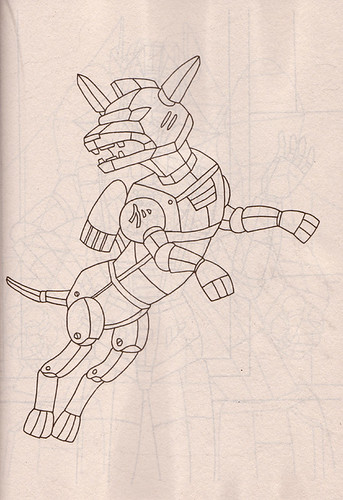 My favorite pictures in the book are some very dramatic close-ups of some of the characters (this one looks a helluva lot like Ultra Magnus) that seem so weirdly out of place as no kid is going to know what the hell is going on. Is this a good guy? Is he bad? Who knows, but it’s still dramatic as hell, if for no reason. 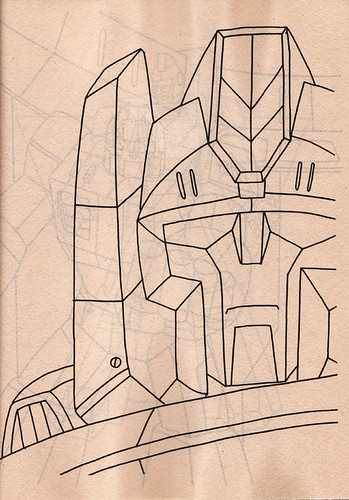 It also gets mighty confusing when there are pictures of characters with both symbols. Is he supposed to be a spy or is this just really quickly done work with little to no effort thrown in for any type of continuity or story? I’m going with the former because the latter is probably true and that’s a shame since the artists went out of their way to copy the body style of the G1 Transformers. 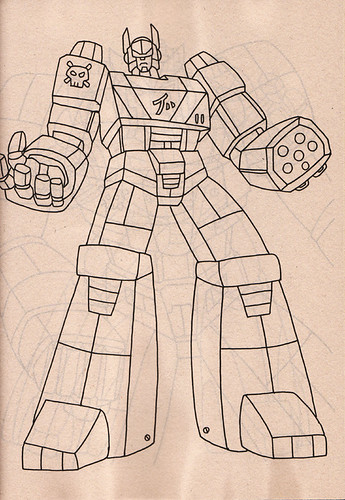 In fact I think I know what the story might be. You see there are these evil robots that want to take all of Earth’s rocks (ala the picture below of a Megatron looking dude), especially the glowing rocks like above. 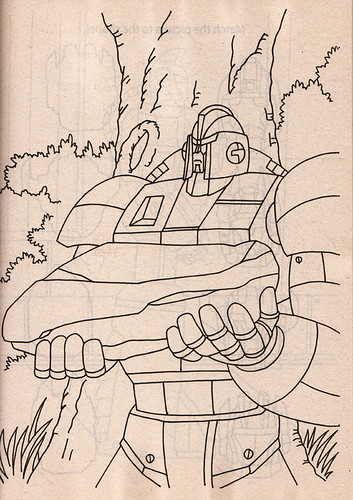 But earth’s cats have gathered together with the help of gentle fun loving robots (including the above girl robot) to save our planet’s rock supply. If this isn’t the story than both of the pages, above and below, just make me ask WTF?!? 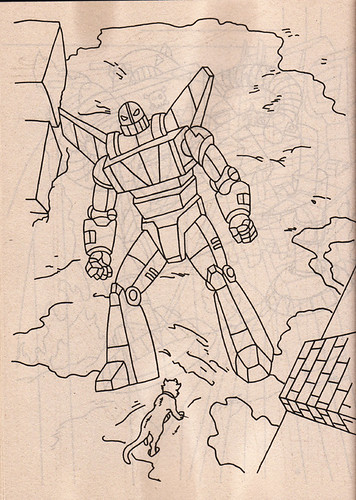 The coloring book also has one of the worst games of connect the dots I’ve every witnessed and I’m pretty sure I’ve seen every Pee Wee’s Playhouse that ever aired. I mean, c’mon, can you guess what this picture might be? 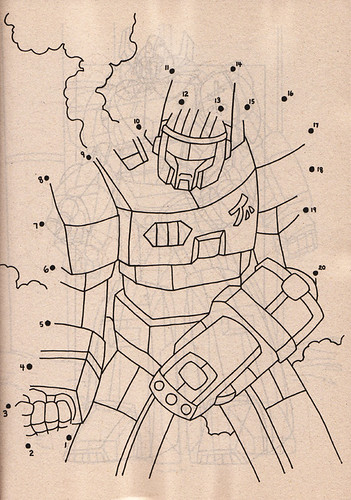 Also fun is this one weirdly agonizing and dark death scene: 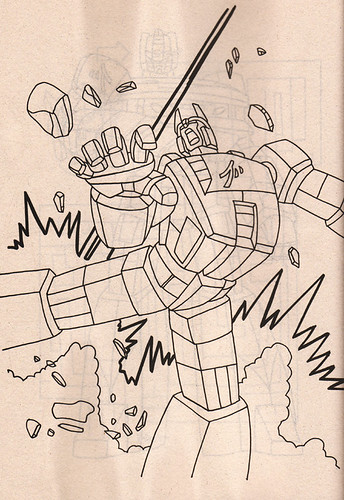 Nowhere else in the book is there anything that points to actual battle, other than that picture of the one robot and the cat. In fact there are no pictures of two robots together on the same page. Also, even though there are some robots that can obviously transform (un-pictured there is a robot that has a car windshield, back window, side windows and a roof as a chest) there are no pictures of vehicles or anything else.

All in all this is a really weird and sort of fun coloring book, but it totally rips the Transformers off in a really horribly lazy way. I wish there was flavor story text. I’ll bet my “sort of” nephews think I don’t know my toy robots now.  If only they knew how much of a dork I really am…

I’ll trade you a hand-less Murphy for your Boddicker’s Bros card!

Reclaiming My Childhood, Part 7,235: The Silverhawks

Wax Paper Pop Art #10: Before the WWF was pissing off panda enthusiasts…