What can I say about the Wizard?  When this flick came out I was at the apex of my Nintendo playing years as well as one huge Fred Savage fan.  It seemed like you couldn’t turn on the TV or go to the theaters without seeing something with Fred Savage in it from 1987-1989 (The Princess Bride, The Wonder Years, Little Monsters, Vice Versa, and the Boy Who Could Fly were all favorites of mine.)  So this was another in a series of 80s flicks that seemed like it was tailor made for my viewing pleasure. 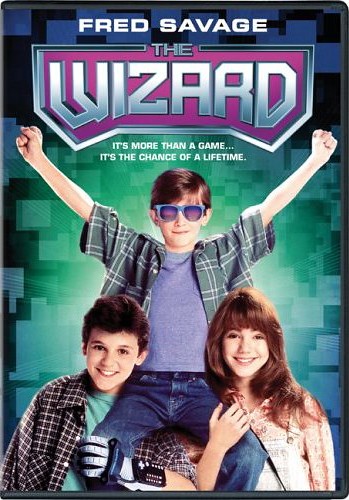 I missed the flick in the theater because my family was in the midst of moving from Florida to New Hampshire during its theatrical run, but I know I helped to wear out a VHS copy at our new local video store when we were all settled.  When this flick came out the 8-bit Nintendo system was at its height and they just starting doing crazy stuff like introducing the Power Glove.  For all those unfamiliar with the PG, it’s depicted in the picture above, which is also sort of a fanboy gripe as Fred Savage’s character never wears the glove in the movie.  In fact, that’s one of the cooler (or most stupid depending) parts of the film, when Lucas (the de facto villain) has one of his lackeys (one of which is a young Tobey Maguire) bring him a box that he slowly opens to reveal the glove.  It’s such a James Bond moment.  It’s also funny that the glove comes off as the best Nintendo accessory since the plug-in cheese slicer, when in fact it was one of the worst. The power glove was one of Nintendo’s first shots at working in a virtual reality aspect to their games systems (after the Zapper pistol and the Robotic Operating Buddy) which has culminated in their new interface on the Wii system, though they didn’t design the glove, just licensed it.  The power glove was heavy and required the wearer to position their arm in such a way that it was in the field of a trio of sensors that attached to the TV.  Because of this it was a pain to use, literally and figuratively, so what ever benefit it provided in terms of a more natural game-play, were out weighed by the pain of trying to use it.

The other Nintendo thing this movie introduced the public to was Super Mario Bros. 3, which at the time was starting to make its way around arcades thanks to the Nintendo Play Choice Ten.  Other than these items the flick is really shitty at pimping Nintendo merchandise as almost every instance that a game is mentioned in the movie is either factually wrong or just plain stupid.  First of all, most Nintendo games, even though they have a points system int he game, are not about getting a high score, but are more concerned with advancement in terms of boards or beating the game.  Points as a measuring stick were more of an aspect to Atari games, most of which don’t have endings, but just get progressively harder as the game goes on.  There are so many instances were people are exclaiming "He got 50,000 on Double Dragon in the first two minutes…" which is both impossible and pointless.  There are also a number of times when a game is referred to as one name while the cabinet shows a different game entirely not to mention that most of the off screen game play sound effects are culled from the Atari library of games and just come off as silly.  When Jimmy is playing the Legend of Zelda and it sounds like Pac-Man it’s pretty silly.  Don’t even get me started on the fact that he was playing console only games in arcades around the country, up to and including a sit down horizontal table screen system in a diner of all places.  The most funny of these inaccuracies is during the final contest at the end of the flick when Super Mario 3 is revealed and the contestants are playing their hearts out and the crowd is shouting out what they should be doing.  I mean the game wasn’t even released yet and people are shouting out crap.  "Find the warp zone Jimmy!"  WTF?

Anyway, beyond all these silly fanboy gripes, I always loved the film, I think because at its heart it’s a road movie in the vein of Planes, Trains and Automobiles, Big Shots, Dutch, and National Lampoon’s Vacation, and I really dig that format.  When you pit two or three kids against the open road I get huge pangs of envy as it’s the ultimate freedom for a kid that’s got both a curfew and restricted distance from the house he can travel.  For awhile this is the largest obstacle a kid has to face, starting with being able to cross the street, then leave the neighborhood, to finally being able to stay up past 9:00 at night.  So these movies, especially the Wizard, are a way for a kid to live out his most unrestricted dreams.  Even if it’s just to get to Universal Studios and play a Nintendo game that he really doesn’t even care about.