Actually, no it won’t.  I live in the heart of the south, and it would surprise me if we could string a sentence together let alone politically and radically detach ourselves from the country.  Not unless the fate of NASCAR was riding on the outcome.  I figured since I wrote about a movie I don’t own today, that I’d take a minute to write about one I do own to sort of balance things out.  Oh, and I’m bored, and when I’m bored I typically let whatever movie song I can think of run at full blast though my head and just sort of zone out.  It’s a survival tactic I learned in high school when I had to wait 3 hours for a ride home every day. 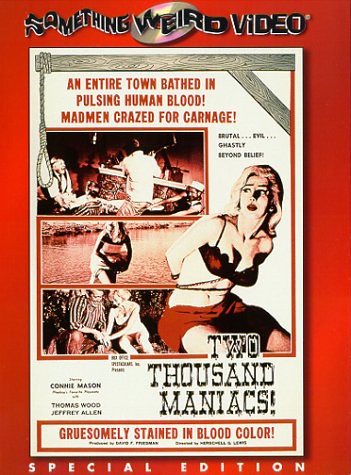 Anyway, the song that’s been on loop in my head for the last hour is probably one of the most annoying yet catchy southern folk ballads I’ve ever heard, and I think I’ve heard three.  They’re all about the same damn thing, with various styles of banjo picking or acoustic guitar and different choruses, but at the end of the day they’re about the south rising up against the imaginary snowbirds they feel threatened by.  The song is called Rebel Yell and was written by Herschell Gordon Lewis for his 1964 exploitation splatterfest Two Thousand Maniacs.

About three or four years ago, my friend Kevin and I had been taking turns hosting a regular movie night when we decided to do something a little more productive with our movie watching.  We had just been bombing out to the local Blockbuster to spend about an hour trying to agree on a flick to watch.  So in an effort of productivity we decided to make movie night a little more educational by coming up with a list of flicks that fit in a genre, the best of the best, and then watching them in chronological order to try and see if we could get a better understanding of where a genre came from and how it’s changed over time.

For my first list of flicks I picked the horror genre because it’s one my friend had absolutely no experience with.  He wasn’t allowed to watch anything over PG-13 while he was growing up and by the time he could he had no interest in them anyway.  So I set out to change that since I was practically raised on a steady diet of horror.  Now I don’t think I’m an expert or anything, I can barely tie my shoes in the morning, but I felt confident that I could come up with 34 flicks that defined horror from the 60s though the 90s.  I did a bunch of research, bought a few books (David J. Skal’s Monster Show was pretty helpful) and came up with the following list (in the order I remember them, not chronological):

Jaws, The Birds, Psycho, Invasion of the Body Snatchers, Rosemary’s Baby, The Exorcist, Halloween, The Texas Chainsaw Massacre, Friday the 13th Parts 1 & 6, Hellraiser, A Nightmare on Elm Street, Nightbreed, Child’s Play, Bride of Chucky, Evil Dead 1 & 2, The Howling, An American Werewolf in London, Donnie Darko, The People Under the Stairs (by request), Scream, The Blair Witch Project, Freddy Vs. Jason, Dead Alive, Poltergeist, Alien, Night of the Living Dead, Dawn of the Dead, Terror Firmer, The Toxic Avenger, House of a Thousand Corpses, From Dusk Till Dawn and 28 Days Later

That went over alright, but in the end the list didn’t feel right to me.  I felt like we missed a bunch of important movies, stuff that I’m just not familiar with.  So I went on a quest to watch anything that I could that felt like it filled in the gaps.  Originally I had skipped the really early stuff because I was under a stupid childhood misconception that anything before the 60s just didn’t qualify as horror (scary maybe, gothic surely, but horror in my mind equaled blood & guts, boobies, slashers, etc., etc., etc.)  The first thing I did was to seek out older films, starting with some silent movies (The Cabinet of Dr. Caligari, Nosferatu, and Phantom of the Opera) and then worked my way up to the Universal flicks (Frankenstein, Dracula, The Wolfman, The Creature From the Black Lagoon, The Mummy, etc.)  When I realized that I botched my list by not thinking to include this stuff, it just fueled the fire to watch more, so if I ever did an addendum list I would get it right.

Well, while doing some more research (I was reading Joe Bob Briggs amazing book Profoundly Disturbing) I came across a movie called Blood Feast.  The film is sort of considered the grandfather of gore flicks (though the Hammer stuff like Curse of Frankenstein was pumping out some of the red stuff a few years earlier.)  So I Netfixed it and fell in love with the film.  It was directed by Herschell Gordon Lewis, and was the first part of a loose "Blood" trilogy.  I promptly rented the second installment, Two Thousand Maniacs, and was double smitten.

Two Thousand Maniacs is an amazingly crazy film that stars one of my favorite B-Movie actors, Bill Kerwin (who I was introduced to in Blood Feast and it’s awesomely weird "How to Carve Meat" special feature.)  Kerwin is like the William H. Macy of his day, though not nearly as prolific.  He had a slightly odd look to him, but was just as cool as any other cat and could take down a town full of redneck killers like nobody’s business.

The movie is basically a super low budget exploitation flick about a handful of northern motorists going south for various reasons that are tricked into driving through a small town in Georgia and persuaded to believe that they are the official guests of honor at the towns Centennial celebration.  They are in fact nothing of the sort as the town’s people have much more nefarious things in mind.  The movie does a really good job of being disturbing and showing a lot of gore, which for 1964 is way ahead of it’s time.  The actors, particularly the ones playing the locals do a wonderful job of being over the top and creepy, some downright evil.  It’s truly one of those films that lives up to its name.  Coincidentally, the film was shot on what was to be the future local of Disney World, which makes visiting the theme park that much more fun as an adult.