So I figured since this blog is about DVDs, I’d also thrown in an entry here and there for flicks I’ve watched recently but don’t own.  I like the idea of keeping it strictly to stuff I own on the one hand because it’ll give the blog a little bit more of a concept, but at the same time I don’t want to box myself in either.  So I guess from time to time I’ll throw in a flick I don’t own. 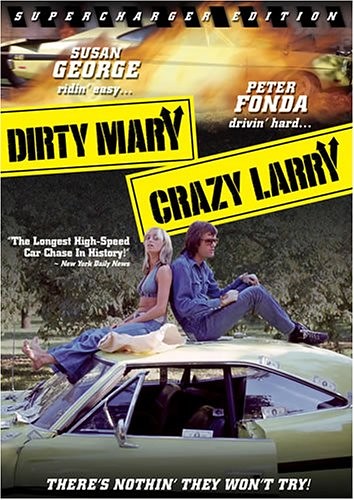 The flick I watched last night was the 1974 road film, Dirty Mary Crazy Larry, which a co-worker of mine Danny, thought I might dig.  I think we have pretty similar tastes, if nothing else for more obscure or foreign films, so I was happy when he recently brought up Dirty Crazy because I’d never heard of it.  He lent me his copy and I spent the evening watching it as my fiancee Carrie baked cookies.

The flick a pretty straight forward heist/road picture that stars Peter Fonda as a devil-may-care ex-NASCAR driver turned thief Larry, Adam Roarke as Larry’s on the wagon pit mechanic partner in crime Deke, Susan George as Mary, a sticky one-night-stand that gets in the middle, and Vic Morrow as Franklin the local sheriff bent on taking the bunch in on his own terms.  There are also a couple of other great actors in some smaller role, namely Kenneth Tobey and Roddy Mcdowall who make the most of the screen time they’ve got.

I’m not sure exactly what I was expecting, though from the title of the film and the suggestive pictures of Susan George on the back cover I thought it might lean towards exploitation in the Big Bad Mamma vein.  The flick kind of started off in this vein, in the first few minutes we see Larry sneaking out on a Mary, and then a disturbing double kidnapping and heist begin to take shape.  The kidnapping in particular is pretty brutal, not so much in what happens, but in how the audience is dragged through it, literally through the eyes of Deke as he breaks into a house, sneaks past a little girl watching TV, and then later as he stalks and abducts the girl’s mother as she’s taking a shower.  Pair this up with inter-cut scenes of Larry getting set up behind a grocery store and the audience is left to wonder what exactly is going on.

The tone of the movie makes a 180 shortly after the kidnapping/heist is ending when Deke goes to tie up his hostages and he lets it slip that he has no interest in harming them, going so far as noticing that the girl he’s bound up is having problems breathing, taking the tape off her mouth and leaving them unharmed.  The film then becomes one long race for freedom as Larry, Deke, and a clingy crazed Mary make their way south away from a crap load of local cops.

It’s at this point that I really started to dig the flick as we really get to know the main characters as they’re stuck in their getaway cars, most notably a "Limelight" yellow 1969 Dodge Charger R/T, bickering with and backstabbing each other.  I think one of the most awesome aspects of this flick are the chase scenes as Director John Hough, a veteran of shooting action on British TV and movie second unit’s, had everything shot at speed with the actors doing most of the actual driving.  Seeing Peter Fonda at the wheel acting like an ass and knowing that’s he’s driving upwards of 100 miles and hour is pretty impressive.  All of the stunts in the film are also real, most of which are covered in one shot with no cuts, so when you see the Charger slam into a truck or swipe a tractor trailer, it’s all happening as shot on screen.  A lot of times the cameraman was in the back seat while the sound guy was in the trunk and after a muffled shout of "Start" from the trunk Fonda would peel out as the director listened in on a headset.

Something that struck me as I was watching the flick is that it’s basically a template for a show like the Dukes of Hazzard, and a perfect example of a type of entertainment that is largely gone from TV and movie screens today.  It’s very rare that we get a movie or TV show that a vehicle is so essential to anymore. Shows like Airwolf, Street Hawk or Knightrider and movies like Bullit and Dirty Crazy really are a thing of the past, and as a genre it’s kind of sad to see it tossed aside.  Sure there are fun scenes in movies every now and then, the bat-tank in the recent Batman movie, the car chase in the Bourne Identity, and probably a few I’m forgetting, but none that are so essential that they couldn’t be nixed and not lost.

It’ll be interesting to see what Quentin Tarrantino does with Death Proof, his half of the exploitation double feature Grindhouse that he’s sharing with Robert Rodriguez.  Since he’s professed a love for road flicks, Dirty Crazy in particular, it should be fun to see how he spins it.

All in all I really enjoyed the flick and think that it holds up very well.  The chase scenes are great, the cars are beautiful, and there are a ton of fun lines like "I’m gonna eat your lunch…" and "You know what a smart man would do in a situation like this?  I don’t know, I was asking you…"