You know, you’re an idiot. You’re going to die tonight…

Unless some other ordering bug bite me, I think I’m going to just pull a random DVD off the shelf to talk about for each of these posts.  Today’s random flick is the underrated 1981 fantasy Dragonslayer, starring Peter MacNicol (Janosz from Ghostbusters II and I guess he was on Ally McBeal or some junk) as Galen the Sorcerer’s apprentice, Caitlin Clarke as Valerian a peasant virgin masquerading as a boy, and Ralph Richardson as Ulrich the Sorcerer. 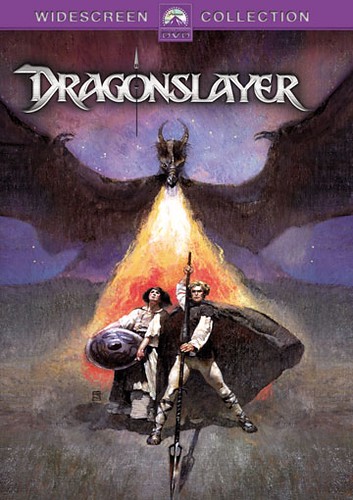 This was one of a handful of weird fantasy movies that my mom introduced me to as a kid when she’d let me stay up late on the weekends.  My mom’s always had a weird sleeping schedule, sleeping in the after work time, and waking up at like 9:00pm and staying up most of the night, and in the summer and on weekends she let me stay up to watch TV and movies with her.  Dragonslayer was one of the flicks that we watched over and over and for the life of me I can’t pinpoint why, because typically my mom doesn’t like genre flicks, or fantasy all that much.  We also used to catch Conan whenever it came on and then over a three year period watched Willow religiously almost three times a week.

I don’t know about Conan, but I think my mom really dug the non-action moments of flicks like Dragonslayer, in particular the village celebration scenes and the budding love story between Galen and Valerian.  Either way we watched it a lot and I’ve always really dug the flick.  For years I never made the connection that the Peter MacNicol was the same guy who played Janosz in Ghostbusters II, which just goes to show you how easily you can fool me with a terribly annoying misc. foreign accent.  In retrospect, I’m surprised he hasn’t made a larger name for himself in the character actor department like Steve Buscemi and William H. Macy.

This has always been one of those films that surprises me when I bring it up in conversation.  It seems like nobody I know really likes the film, and then for no particular reason.  Everyone seems to just shrug it off like it’s got bad special F/X work, or some uber silly story or something, but nothing could be farther from the truth.  Although some of the animated flying sequences are kind of dated, the bulk of the F/X work is pretty awe inspiring and effective in my book.  The scenes in the dragon’s lair with the fire on the water, the baby dragon creatures, the sets and costumes all seem so much better than most of the fantasy movies I’ve every seen.

I think the problem might lay in the realistic world the story is set in.  True the film is fantasy oriented with dragons and some minor bits of magic, but for all intents and purposes it’s not as much fantasy as period piece.  There are no elves, hobbits, nelwyns, dwarves, unicorns, etc., just the one dragon, and it’s treated like we would treat the dinosaurs or something.  I don’t know.

It’s also one of two of my favorite "women pretending to be men" flicks of the 80s, the other of course being Just One of the Guys starring Joyce Hysler as Terry.  Both flicks really screwed with my head as a kid in terms of masquerading as another sex, and probably opened my mind to stuff I’d get into later like Rocky Horror and Hedwig.  The film was directed by Matthew Robbins, the same guy who brought us Corvette Summer, *Batteries Not Included, and the long out of print classic The Legend of Billie Jean.  It was also written by Robbins with Hal Barwood, who as a duo also wrote Corvette Summer and worked on Close Encounters of the Third Kind.

Dragonslayer was on my list of movies to eventually buy for awhile, but I didn’t look for it until I happened upon it in the $5.50 bin at Wal-Mart, so I don’t know if it still has that reputation for being a bad flick that was released at a really low price or what.

One, Two Freddy’s Coming for you, Three, Four, better buy this set of schwag or Freddy will kill you…