So for column #5 of Peel Here, as promised, I’m going to take a look at a weird set of sticker cards published (printed, released, whatever) by a joint effort of General Mills and Donruss in 1983 called the Zero Heroes. I’m not sure if General Mills owns Donruss or if Donruss just distributed the cards (since they do that and I could see them accepting outsourcing work from other companies.) Now for the most part, the main company printing sticker cards in the 70’s and 80’s was Topps, what with Wacky Packs, Garbage Pail Kids, and the six thousand sticker sub-sets in movie and TV licensed card sets, but every now and then the other two companies, Fleer and Donruss would get in on the action.

I don’t remember where I got these from as a kid (not this set in particular obviously, but I did have about 20 of these littering the pages of my one photo/sticker album), probably from my parents on one of their gas or grocery store runs, but I know that I loved them to death.

There are 66 cards in the set, mostly made up of various goofy superhero spoof’s, with a few misc. stickers thrown in for good measure. Each hero card has an origin story printed on the back that details how they came to be and how they ended up. At first, when looking through this set again for the first time in 20 years, I thought that there were heroes and villains, as there were a small number of cards that had odd black backgrounds. Upon reading the origins though, it seems like these were just weird editorial or design choices, as all of the cards seem to be heroes.

For your browsing pleasure, I’ve set up the pictures below so that when you click on them it will take you to the card backs so you can read the origins if you like. If you want a larger scan of the cards you can go to my Flickr sticker set. 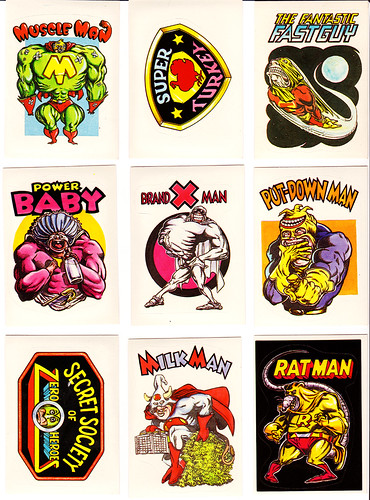 If nothing else, I really dug that each hero got his or her own font for the name, which was a nice tough. Out of the above cards, I had the FastGuy, Power Baby, and the Milkman stickers. 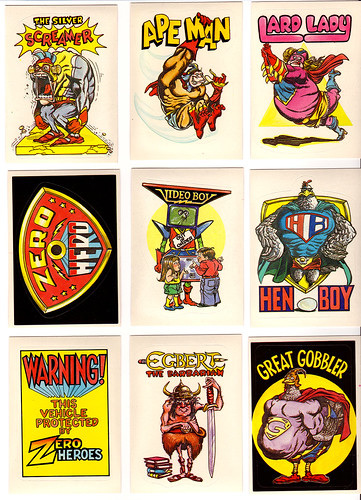 I always loved the Silver Screamer card. I wonder who did the art for this set. It remind me a lot of MAD magazine stuff. Also, what is up with the crazy slew of Barbarian/nerd-Librarian spoofs in the 80’s? Other than Egbert here, there was the scene in Weird Al’s UHF, not to mention a very similar gag on You Can’t Do That On Television. I guess it’s just the phonetics of the words, but you think someone would have come up with a different Barbarian gag. Well, even though it didn’t originate in the 80’s, there was Dave Sim’s Cerebus. 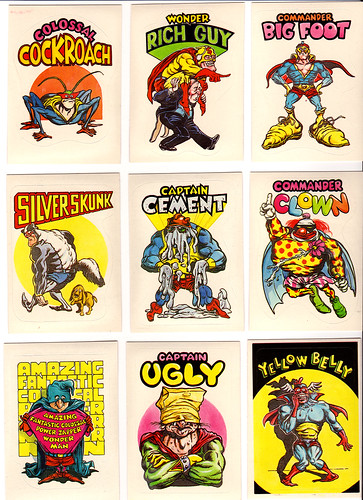 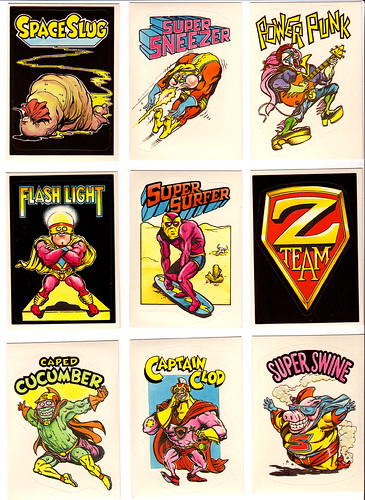 The punk hero is pretty cool here, if not outdated by about three years. I surprised they don’t go with some sort of heavy metal spoof name. I also really dug the Super Surfer as a kid though I didn’t get the gag about a surfer in a luchador outfit in the middle of a desert. In fact I still don’t, so I guess you can color me ignorant. 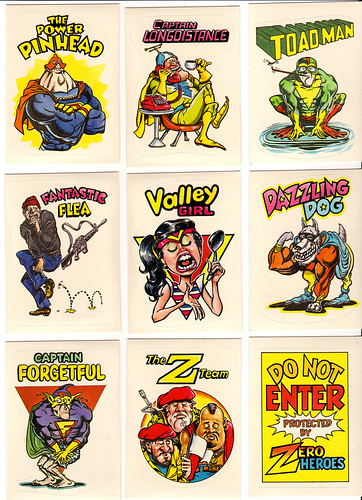 You can really see some of the 80’s references shining out in the above 9 cards, what with the A-Team rip-off and the Valley Girl gagging on a spoon. I will say that the Power Pinhead looks more like the Power Condom head. 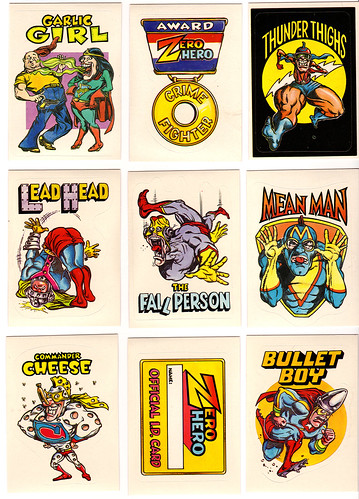 I believe Commander Cheese was my most favorite of these cards because his cowl has that cool hole-y plastic Mohawk. Besides, what kid doesn’t like cheese. 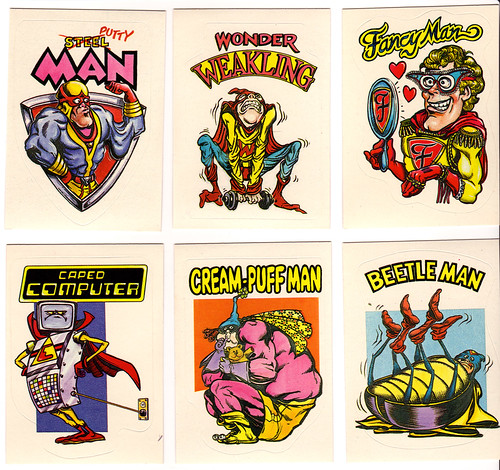 The set wouldn’t be complete with out one fat guy spoof, one girly-man spoof, and a living breathing computer-man spoof. I guess. 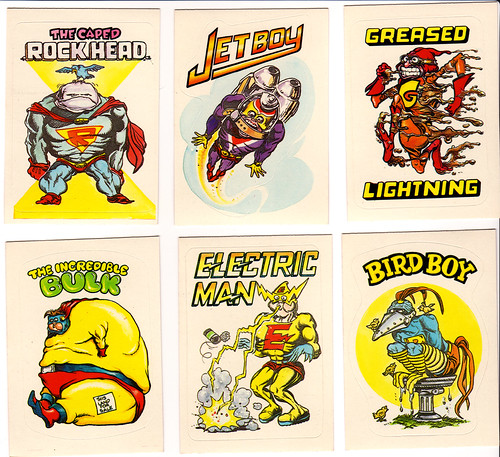 All in all it’s a really fun set of stickers with some really great art. When I sold my Transformers DVDs on eBay and converted the profits into a fund to procure a new 80’s sticker collection, this was probably the one set of stickers that I was the most happy to, on the one hand remember, and on the other find. These bring back a lot of memories of lying on the floor while pouring over my vast collection of stickers.

Next week on Peel Here I’ll share with you something that I found that still makes my head spin and hurt simultaneously.

OMFG! Update and some creativity…