Low Budget Pictures, or how I learned to love no-budget schlock horror comedy…

A couple years ago I really got into an awesome book on film making, Robert Rodriguez’s Rebel Without a Crew, that details how he went from a struggling film school student who scraped together $7,000 to shoot his first film, to a Hollywood player.  The meat of that book deals with how he raised the money for and the eventual shooting of El Mariachi and all the crap he went through to get a movie on film.  It’s a pretty fascinating read and when I was done I really wanted more. 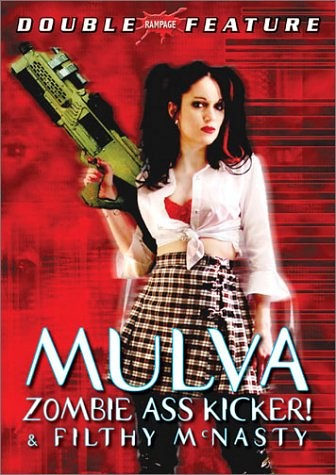 The only other book I could find at the time that was in a similar vein was Lloyd Kaufman’s Make Your Own Damn Movie!, which is basically a how to on independent film making the Troma way.  The main difference between the two books, though they both are proponents of low budget film making, is that while Robert Rodriguez urges you to use as little money as possible to get a big budget look, Kaufman’s view is to use as little money as possible to get what ever you can on film, even if it means using a watermelon as a stand in for a human head in a "head crushing" scene.  Kaufman’s vision for film making leans more in a "Get it done no matter what…" direction that is truly the mantra for low budget filmmakers everywhere.

In Make Your Own Damn Movie!, there is a chapter where Kaufman mentions a few film makers that he’s met or worked with that are already following in the footsteps he’s left in the indie film scene.  One in particular stood out to me, Chris Seaver, who had been making movies since he was like 13 or something.  Seaver’s production company, Low Budget Pictures, pretty much epitomizes the low or no budget film making community in that above all else, getting the picture shot and on some form of media available to the public is the most important aspect of the film making process.  If that means being shot on video, digital video, or 750,000 still frames edited together to make a moving picture with sound edited on top, then do it, package it and sell it to the public via websites, eBay, garage sales, indie distributors, and conventions.  It’s not to say that story and acting aren’t or can’t be important as well, but there sure is a push to do it and get it done with whatever talent and is available and sometimes that’s very little.

I was curious after reading Kaufman’s book, so I found a copy of Seaver’s biggest production at the time, Mulva: Zombie Asskicker! on eBay for $2.  The price seemed right for taking a chance on a flick like this, and the cover (pictured above) looked pretty darn sweet (though ultimately highly misleading.)  When I finally got the DVD in the mail I was surprised to see that it was actually a double feature paired up with another of Seaver’s films, Filthy McNasty.  Great, two flicks for $2, and I figured that I’d get a good idea of what this dude, and possibly the low budget community were up to.

I popped the DVD in and sat back with a bowl of popcorn and watched my first Chris Seaver flick.  I truly didn’t know what to expect, and as I sat through the 50 odd minutes of film my opinion kept flipping between "Worst film ever!" and "Wait, I think there might be something to this!"

Basically Mulva: Zombie Asskicker! is the story of two hapless girls, Mulva, a candy craving 80s obsessed mush-mouth, and her friend Cassie, a kinda-goth sarcastic, who are planning an awesome night of Trick or Treating only to find themselves dealing with town bullies and a horde of zombies bent on destroying their beloved city of Tromaville (yes, Seaver is heavily influenced by Troma flicks and Lloyd Kaufman.)  Thrown into this crazy omelet of a meal are Bonejack, a Bill Cosby obsessed, Don King haired, neighbor and mentor played by Seaver himself (in black-face no less), Teenape, a misogynist ebonically challenged man-ape (in the vein of Teen Wolf), and a handful of cameos by Troma regulars Debbie Rochon, Trent Haaga, Doug Sakmann, and Lloyd Kaufman himself in a dance scene that ends the flick (most, if not all of Seaver’s flicks end in dance scenes.)

Now before I mislead anyone into thinking that this is some awesomely crazy flick that completely fell off their radar when looking through all the sludge that fills your local Blockbuster, I have to take a minute to explain something about this flick.  On the surface, this film (which is a term loosely used to be sure) is probably a candidate for one of the worst flicks ever.  Next to this, Plan 9 From Outer Space is like Citizen Kane.  The production values are as low as one could imagine without looking like a blocked porn channel on cable.  Shot on video, the film looks like the a 12th generation copy, edited together on two VCRs that are connected by a coaxial cable that’s been chewed on by the family dog.  The sound and lighting quality are so poor that it’s hard to discern what’s being said and by whom, and the acting is almost non-existent (though both Trent Haaga and Debbie Rochon are awesome in their cameos, and Seaver is pretty electric as Bonejack.)

Once again, though, before I go winning you over to the faults of this flick, I have to say that through all of this, the film is still watch-able.  Not only is it watch-able, but it’s actually kind of funny, and under much better circumstances, it might even be good.  There’s a potential here that would probably be lost on the majority of people watching, but for someone who is around the same age, into comics, horror, pop culture and bad movies, there is a possibility that a glimmer of something larger could be seen.

I was still sort of in a bit of shell shock after watching the film, so I just kept it going and watched the double feature flick, Filthy McNasty.  It was after I finished watching this flick that I felt like I had a better grasp on what Chris Seaver and Low Budget Pictures were all about.  McNasty, a much cleaner and better quality (in terms of production values) flick, is the starring vehicle for Debbie Rochon and is about two girls who make a deal with a demon to be more popular, but then have to deal with the demon killing their friends.  It’s modeled after flicks like April Fools Day and oddly enough Cinderella, with a little bit on John Hughes thrown in for kicks.  Of course there is also a lot of Jackass, and a pinch of Peter Jackson as well in the amazingly dirty jokes and an all too uncomfortable nude scene (which with actors this young and in a film with such low production values feels downright illegal.)

Like Mulva, McNasty is hardly a good flick, just better than Mulva in terms of production value.  Both flicks were shot for very little with only what was on hand for costumes and props.  The actors are largely friends or acquaintances that Seaver has pulled together over the years and most are no longer involved with the company.  Again, like Mulva, there is a glimmer of something better than what is on the screen in the flick.

Like eating Chinese, I was weirdly ready to re-watch these flicks the next day and magically the low production values (much like an Ed Wood film) added to the experience this time around.  Everything started to have a feel of intention, and the jokes, a lot of which seem like the type of in-jokes that develop amongst a group over years became a little clearer.  Both flicks feature commentary, which help to shed a little light on in-jokes, and the conditions with which the films were made, which just compounded the enjoyment of watching the flicks.  After the third watching, I felt like I sort of knew these guys, like they were a group of kids in high school that used to sit at their own table in art class and you’d over hear them all the time talking about the weird crazy stuff they did on the weekend.

Though I wouldn’t go so far as to say these are some of my favorite films, I will say that they’re a window into a area of fandom that I didn’t realize existed and in turn is a very pure form of film making, one totally not for profit, only for hardcore fans, and at the end of the day is about getting a flick shot, packaged and sold to the public in the most direct way possible.  In a time when it takes almost a million dollars to make even the most independent of indie films, it’s nice to know that there are still people out there shooting movies that cost a couple hundred dollars to make.  That’s a goal worth shooting for.

Marmalade, a Duffle coat, and a bear from darkest Peru…

Remember when the Madballs met the Care Bears?