There! Evil PURE and SIMPLE by way of the 8th dimension!

So I figured since this column is going to deal mainly with my personal movie collection, I’d start the first real post with probably my favorite movie of all time, The Adventures of Buckaroo Banzai Across the 8th Dimension.  Though I’ve been watching movies since I popped out of the womb, most of what I loved when I was younger were more or less simple films.  Star Wars, Indiana Jones, Superman, and the like are all great movies, but at the end of the day they are pretty straight forward and though I love them, I think a lot of it has to do with the age I was when I saw them.  When I see films like these today, the Lord of the Rings trilogy for example, I like them, but I don’t love them like I used to. 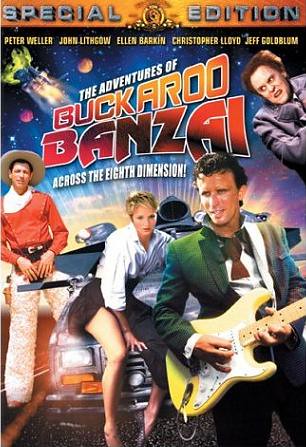 When I think of the newer films that I love, they all typically have an aspect to them that makes them just a little more challenging or a little more complex whether in terms of concept or the extent of the ambition involved.  Take the Big Lebowski for example.  The film has a really odd dichotomy between its simplicity (it’s a film about a guy who just wants to get his rug back, because it really does tie his room together) and its huge ensemble cast of secretive characters and its unnecessarily complex film noir plot.  There’s something there that I can’t put my finger on that just makes me love this film more than the parts combined.  Some phantom rug that ties the movie together for me.  Most of Charlie Kaufman’s efforts (Being John Malkovitch, Adaptation, Eternal Sunshine of the Spotless Mind) are like this for me.

Out of all the films I saw as a kid, Buckaroo Banzai is one of the ones that has this aspect to it.  When I first saw it I didn’t love it, probably because of this.  There was more there than I could process as an 8 year-old, but as the years went on and I revisited the film I got more and more out of it.  It’s actually very similar to the Big Lebowski in that on the one hand it’s a simple action movie, one of a million in the 80s, that deals with the threat of an alien invasion thwarted by a small band of unlikely humans at the last possible moment.  Yet the cast of characters is amazingly rich and the plot is, like Lebowski, unnecessarily complex and weird to a point where it all becomes much more than the sum of its parts.

I want to say that I first saw this film on HBO during the day on either a summer vacation or a weekend sometime in the mid-eighties, and like I said sort of dismissed it.  Later on I would keep coming back to it because of the actors, a lot of which went on to star in other movies I loved (Peter Weller in Robocop, John Lithgow in Harry and the Hendersons, Jeff Goldbum in The Fly, Christopher Lloyd in Back to the Future).  I also love the unexplained "I just started reading in the middle of this comic book" feel the film has.  All the unanswered questions.  Who is this infamous World Crime League?  Why is Perfect Tommy (Lewis Smith) so perfect?  Who is Peggy Priddy, twin sister of Penny Priddy, and Buckaroo’s first wife who was murdered?  Why does New Jersey (Goldblum) have such an affinity for woolly chaps and 50s era cowboy clothing?  Etc., etc., etc.  In fact, in the film itself Buckaroo and his team, the Hong Kong Cavaliers, are stars of their own Marvel comic book, which was also released in real life by Marvel.

Add to this the dry delivery by Peter Weller of some really obtuse yet hilarious lines such as: "Hey, hey, hey.  Don’t be mean.  We don’t have to be mean because, remember, no matter where you go, there you are."

There are also a lot of little touches everywhere that make the film really fun to watch.  How they manage to tie in the original invasion of the Lectroids to the 1938 Orson Welles broadcast of War of the Worlds is genius.  I also love that the character names are silly and funny, breaking the unspoken rule of comedy of no funny names and still managing to pull it off.  I mean Buckaroo Banzai?  Penny Priddy?  All the Lectroids being named John something or other (Christopher Lloyd’s Bigboote is a standout.)  Tie this together with insanely esoteric concepts like an 8th dimension that allows solid matter to travel through other solid matter, yet also serves as a gateway to either a parallel universe or as a worm hole to another galaxy, and you have a very rich and fun film that manages to mix action, comedy, and pulp nostalgia into one giant roller coaster ride.

I really do love this film, right down to its dated special effects (some much more effective than today’s CGI nightmares leaking off the big screen) and corny dialogue.  I love this film because it’s intentional and crafted to be exactly what it is.  I think the scene that sums this up the best is the end sequence, a wacky dance/walking montage set to some awesome 80s synth music that finds all of the characters in the film (except the bad guys I think, but including those who have died) dynamically joining up at a concrete drainage area to just, well, walk dynamically.  It really is a beautifully shot scene with plenty of fun zooms, twists and turns that is so upbeat, yet so serious it’s almost mind numbing.  Wes Anderson made an homage to this sequence in The Life Aquatic at the end when all the crew members and characters meet up and walk to the ship.

Another aspect that I love is this film’s connection to Big Trouble in Little China, my favorite John Carpenter film.  At the end of Buckaroo Banzai there is a title page that pops up that says you’ll see him next in BB vs. The World Crime League.  Of course the sequel never materialized because BB didn’t do well in the theaters, only grossing $6.2 Million, though it was only released in 236 theaters which is a pretty small release.  Well the director W.D. Richter, who is mainly a screenwriter, ended up modifying the sequel script into what is now the script for Big Trouble in Little China.  I’m not sure if Jack Burton was a character in the original script or if Buckaroo morphed into him, but it’s pretty interesting to see what would possibly have been in the proposed sequel.  If nothing else, and barring the tone of John Carpenter’s flick, I think Lo Pan and the fantastical Asian underworld would have been very similar in a BB sequel.

Anyway, to this day I carry the film around with me.  I’ve got a BB patch that I bought at Dragon Con in Atlanta 6 years ago on my jacket.  Just one of my favorite films.

Cartoon Commentary, taking a closer look at King Gorneesh from the Ewoks…

Next week on Branded in the 80s, Cartoon Commentary!