Ever notice how the visitor’s logo from V looks like a swastika? Creepy…

Finally, after years of putting it off, I broke down and bought the entire V television series on DVD, both the mini-series (including the Final Battle) and the regular TV series.  It’s one of those things that I’ve been meaning to make my fiancee sit down and watch, but it’s hard to get someone to commit to 27+ hours of TV, especially when they think it’s going to suck and take a day away from a life that could be spend doing anything else.

Anyway, for me (and a lot of other geek/nerd/dorks who grew up in the 80’s) V was the next best thing to Star Wars, which is probably the best way to describe anything Sci-Fi related in the late 70s and early 80s (e.g. Battlestar Galactica, Buck Rodgers, the Last Starfighter, etc., etc., etc.), and was the closest thing to a huge cultural TV event that I experienced first hand in the 80s.  I remember watching it every time it was on TV either first run or later re-run on Saturdays on the more local channels, and then being so jealous of my friend Jeremy who had a copy of both the original mini-series and the Final Battle on VHS recorded from when he was living up in Route Island.

My family didn’t have a VCR when it was aired originally, so I never had a copy of my own when I was a kid, but I did have the next best thing (at least in my weird young brain), the official V action figure.  But lets be honest and call it what it really was, a doll.  It says action figure on the original package, but in a time where the standard for action figures was between 4 to 6 inches, the V doll just didn’t fit in (unless you assumed that all alien races were three stories tall like the Zentradi in Robotech.  In fact if you were lucky enough to have some of the Indiana Jones figures you could probably have this figure mixed in as the result of the Nazi’s contact with the alien visitor race and the Zentradi, and Harrison Ford still would have beat the crap out of them.) 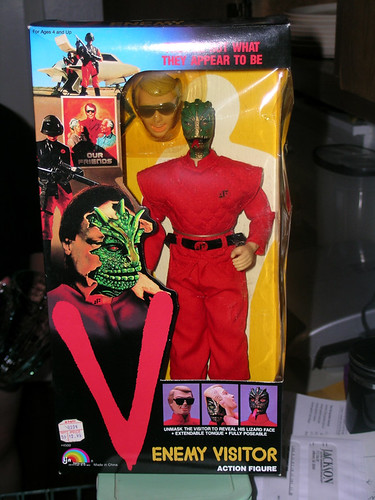 As far as dolls go though, the V figure was pretty cool.  Not only did he come with a removable head mask (yet another in a long line of awesome figures with removable headgear), but he also had a pretty darn accurate laser gun (I’ve always loved the design on the V laser), nifty sunglasses and tongue flicking action.  This was no Ken doll. 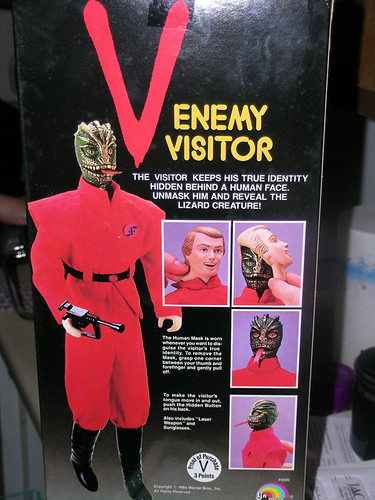 The only thing this doll was lacking that would have made it the best doll ever are shock trooper accessories like characters have on in the pictures printed on the box.  I mean a doll with a removable head mask as well as a cool black helmet would be like four times as cool.  Add to that a black vinyl Michael Jackson vest and attachments that made the laser pistol into a rifle and were talking male doll nirvana. 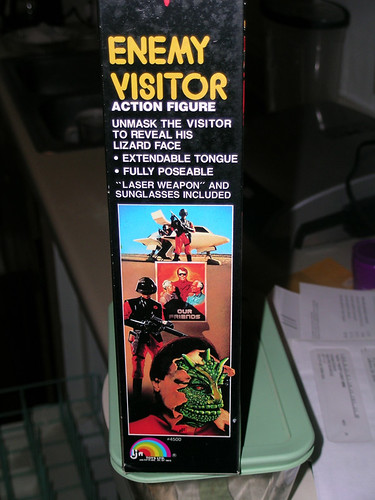 It’s a mystery to me how a lot of my toys became lost to time, but the destruction of my V doll is pretty much burned into my memory.  Actually destruction is the wrong word as it was more of a dissection.  I was pretty good about taking care of most of my toys, but some just were not meant to last.  I think I had the V doll for a couple of weeks before the head mask started to tear.  There is a slit on the back of it from the neck up to the middle of the hairline so you can open it wide and put it on the figure’s lizard head.  Well every time you do that the rubber on the mask would tear a little because it isn’t slit far enough up.  But when you start a rip in rubber it just keeps getting bigger and bigger.  The next thing I knew it was all the way up and over to the hairline in the front so that the mask would stay on properly anymore and needed the sunglasses (which wrapped around the entire head) to keep it on.  My mask also had a thin spot of rubber on the front where a bubble got into the mold, thin enough so that the green skin would sort of show through like on some of the TV episodes.  This was cool at first but then it broke and now I had a new rip in the rubber that was spreading.

At this point I just threw the mask away, I mean the lizard head underneath was cooler anyway right?  Well at some point in the next few weeks I started getting curious about how the tongue mechanism worked.  I had already ditched the mask so I think at this point I was ready to give up on keeping the figure intact, and decided to do an autopsy to really see how this figure worked.  In the end the figure was in about 15 pieces and was relegated to the trash when it just didn’t interest me anymore.

I’ve always sort of regretted taking the figure apart, especially as the years went by because I realized that the figure was actually kind of rare.  There wasn’t all that much V merchandise made (at least not in the USA, apparently there was a ton produced in Argentina) and because it was so unlike the rest of my toys I had a soft spot for it in my heart.  While looking for 80s stickers on eBay recently I stumbled upon a guy who pretty much specializes in selling V figures.  I guess he lucked into like 10 cases of old store stock or something and he sells them mint in box at varying prices depending on how yellowed or otherwise damaged the plastic on the box is.  I decided to break my rule of not replacing my old toys this once because the figures are basically new, and picked one of the cheaper ones up.

When I got it in the mail after I got back from my vacation in Florida I was torn.  I knew I wanted to write this article on the figure, but I wasn’t sure if I should keep the figure in the box (in case I wanted to re-sell it or just for posterity’s sake) or if I should rip it open and have some fun with it.  In the end, like I’ve always done and probably will always do, I opened the figure.  I have some weird internal thing that prevents me from keeping toys in their original packaging.  It’s like the toys can’t breathe or are frozen in carbonite and I have to rescue them.  I had a friend when I was 10 or so who kept all of his Transformers mint in the packages, and even though he’s probably a plastic crack dealing millionaire now I have to wonder if a small part of his childhood is dead to him now. 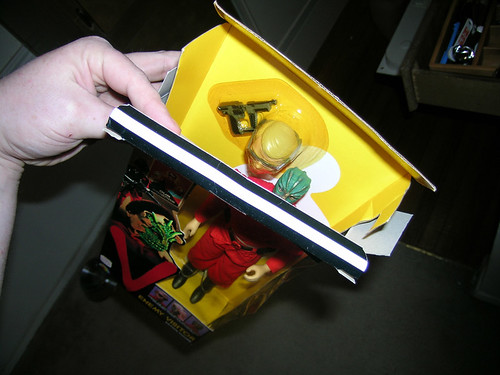 Besides, the plastic on the packaging was getting pretty darn yellow and brittle and didn’t look all that good on a shelf because of it.  It just looked dirty. 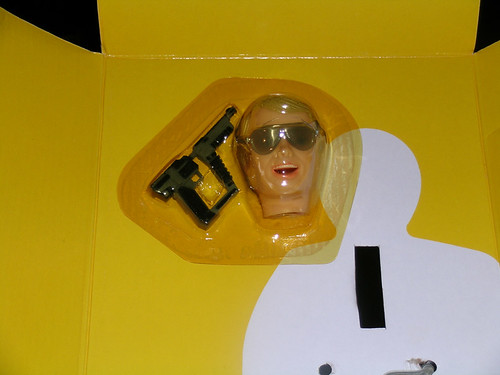 Now that he’s liberated from the confines of his yellowy plastic prison he looks a lot cleaner and happier, though I’m sure the happy bit can be attributed to his god awful evil Nazi smile. 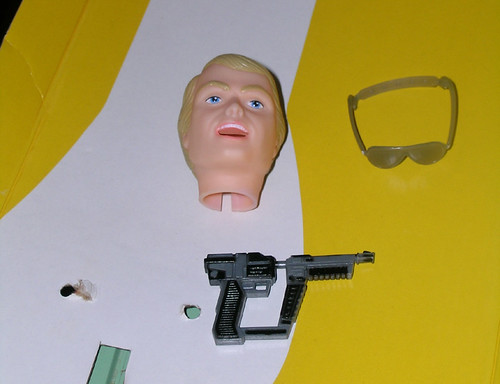 That is actually one of the more disturbing things about this figure in fact.  LJN based this figure on the alien Visitor propaganda posters that you see in the mini-series (made popular by that scene where Abraham Bernstein (Leonardo Cimino who played Scary German Guy in the Monster Squad) spray-paints a big "V" for victory over a Nazi looking visitor who has his arms around some young kids and grand parents.  It’s pretty much your basic Aryan Nazi stereotype, which is actually the basis for the V series to begin with (the mini-series started out as an alternate 1980 where a new fascist regime comes to power and eventually the producers wanted to make it into a sci-fi film instead.) 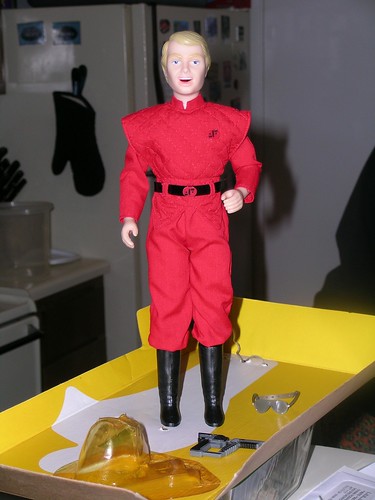 This was the only style of V doll that was made, though I’ve heard rumors of a Diana doll and a proposed line of smaller figures and vehicles that were never produced.   It’s kind of weird when you think that they only made the one figure, a very Nazi-esque figure and no good guys (I guess because a Marc Singer figure doesn’t have sweet tongue lashing action capabilities), that kids would be sort of just goose stepping along with this toy.   Like that one shady kid down the block that had one Skeletor figure and he used to play "torture my sister’s stuffed animals" with him, cackling in a high pitched laugh. 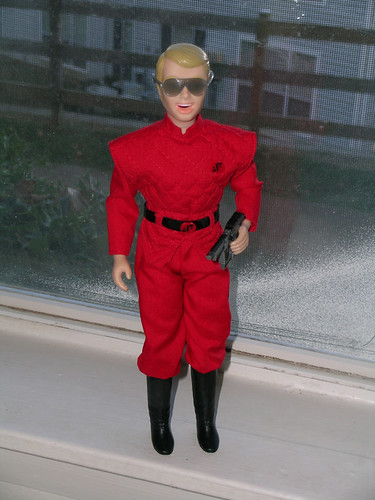 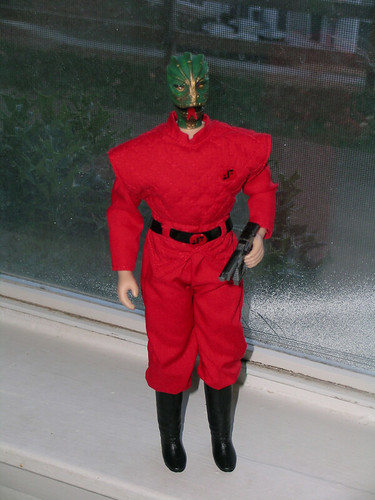 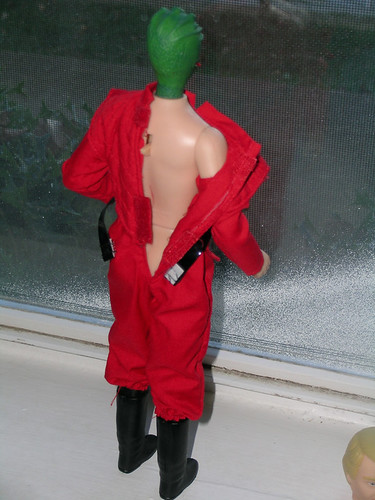 Even though the figure is kind of weirdly disturbing, I’m glad I bought it again.  It’s actually kind of cool to have something like this back from my childhood, and I can totally see how easy it would be to get swept up in trying to buy everything back.  Luckily I have a pretty high threshold for the amount of money I’m willing to spend on stuff like this so I doubt that I’d be willing to plunk down much money on the hobby.  Since most of the other toys I was into usually fetch about $75-$100 on eBay for mint in package figures I don’t think my collection is going to grow all that much.   That’s alright though, I’ll just sit and watch my cat chew on this one content in the knowledge that some anal fanboy is getting the shivers as if someone walked over his mint in package grave. 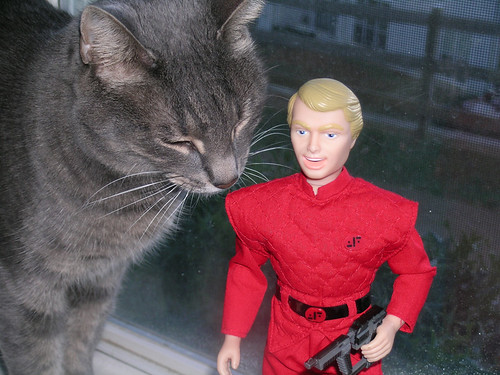 He came, he saw, he podcasted, He-Man.

Target starts missing the mark sooner that I expected.