I’m going to break format a little and take a second to talk about an awesome DVD set for a cartoon that was a little before my time, but one that I’ve been getting into lately, the Groovie Goolies. 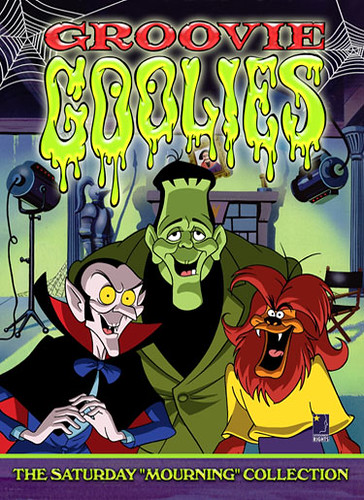 I’ve crossed this cartoon’s path a few times in the last 10 years but never got around to checking it out until recently.  The first time I heard about the show was when I picked up the Saturday Morning: Greatest Hits CD (the 1st CD I ever bought btw) in the mid 90s and fell in love with the Toadie’s rendition of the Goolie-Get-Together theme song. 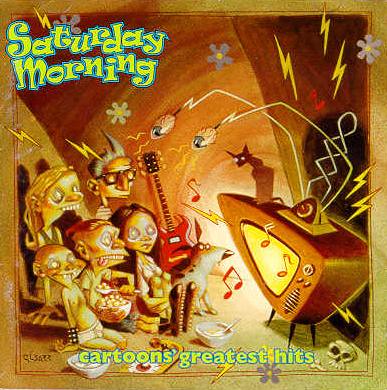 Then a few years later I was flipping through a stack of used CDs at my local Disc-Go-Round when I came across a disc with some awesome cover art.  TheCD was by the band the Groovie Ghoulies and it was called Re-Animation Festival.  I picked it up and proceeded to play it over and over for the next few weeks.  Their monster themed bubble-gum pop punk really clicked with me, particularly their Chupacabra song. 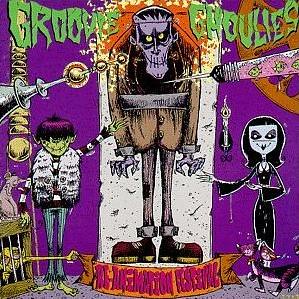 With these songs swimming in the back of my head this past Halloween I found something a little closer to the actual show when I noticed a few record blogs that posted about the original show’s LP. 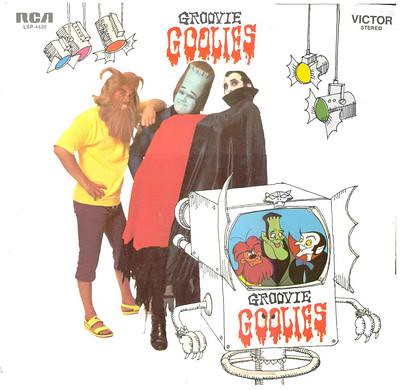 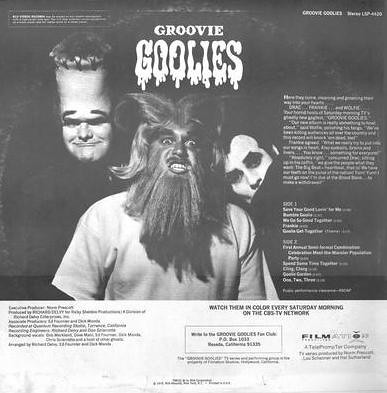 I managed to snag a copy and give it a listen and was hooked on the really fun Archie’s-esque bubble-gum rock.  So finally I decided to check out the show on DVD.

BCI Eclipse released the complete series this past year on DVD. There were a total of sixteen episodes produced in 1970-1972, which aired on CBS Saturday mornings.  The show is basically an Archie’s spin-off though I don’t think the characters ever appeared in the digest comics or cartoon.  The show is one of the earlier efforts of Filmation, the company responsible for bringing up great cartoons like He-Man and the Masters of the Universe, Bravestarr, and the Ghostbusters (not to be confused with the Real Ghostbusters, the cartoon spin-off of the 80s movies.)

Basically the Groovie Goolies is a monster themed animated version of Rowan and Martin’s Laugh-In, the late 60s variety and sketch comedy show.  Filmation was pitched the idea of doing a monster themed cartoon and decided to try the ultra fast paced musical and variety show format made popular by Laugh-In to try and capture the attention span of the sugary cereal eating children’s television audience.  Filmation took a queue from the Scooby Doo rogues gallery, as well as inspiration from the Munsters and the Addam’s Family and created a trio of classic monster characters.  Drac, a stuffy vampire, Wolfie, a beatnik like beach bum werewolf, and Frankie, a slow paced (almost laconic) Frankenstein’s Monster with a voice that sounds a lot like Boris Karloff were the main characters (not to mention the members of the Groovie Goolies Band) surrounded by a bunch of miscreants like Mummy, Batso and Ratso (two trouble making ghouls), Boneapart (skeleton whose voice actor sounds a lot like Bender from Futurama), Hagatha (a witch cook), Bella La Ghostly (a vamp-esque lady inspired by Morticia Addams, Lilly Munster, and quite possibly Vampira), Orville (Little Shop of Horrors Audrey II like everything eating plant), and surprisingly enough a spin-off character from the Archie’s, Sabrina the teenage witch.

The GG’s was produced by Lou Scheimer and Norm Prescott, was directed by Hal Sutherland, and featured the voice talents of Howard Morris, Larry Storch, Larry D. Mann, and Jane Web just to name a few.  Each episode featured a barrage of pun-y jokes, two musical numbers (one featuring the Goolies themselves and another that closes each show featuring a spoof of a popular band, like the Rolling Headstones), and a few quick sketches.

The show reminds me a lot of the Monkees, with a lot less plot and a lot more kookiness.  The musical numbers in particular are very similar, both in tone and with their nonsensical chase and dance scenes.  There are a ton of fun catch phrases, Drac’s "This place is driving me batty!", Frankie’s "I needed that", and Wolfie’s "ArrroooOOOooo!", as well as a plethora of monster themed puns and sketches, enough silliness in these 16 episodes to last for weeks.  There’s also a lot of references to pop-culture products, not the least of which is Wolfie’s drag racer that’s at least twice as cool as the Aurora model version (it even grows hair!)

The DVDs feature a couple commentary tracks, some image galleries, and a very goofy 45-minute documentary hosted, written, and directed by Daniel Roebuck and Wally Wingert two confessed Goolians and monster buffs (Daniel Roebuck’s got some great articles in the awesome Horrorshow Magazine, including a trip to Universal Studios with Ben Chapman, one of the guys that was in the suit in Creature From the Black Lagoon.)  The documentary, though ultra silly, manages to touch on a lot of stuff from interviews with those involved, fans like Alice Cooper and the band the Groovie Ghoulies, not to mention a bunch of fun facts and trivia (Before the show was called the Groovie Goolies is was also called Monster Inn, Spookie Kookies, and Googlie Ghoulies.)

To sort of tie this into the 80s format I’ve chosen I will say that the show was the grand father to shows like Count Duckula and to a small extent Kidd Video.  Before Kidd Video released an album in the Middle East and was blasted to the flipside, the Groovie Goolies were recording LP’s and scoring top ten hits like "Chik-a-Boom (Don’t Ya Jes’ Lov It!)"  They even had live action counter parts that posed for the album cover and even starred in an hour long 1972 special on ABC titled "Porky Pig and Daffy Duck Meet the Groovie Goolies."

All in all the show is really fun and is a perfect example of what Saturday morning television was like in its heyday, not to mention an awesome amalgamation of monsters, pop music, and animation.