I’m back from a week’s vacation with a very postponed Peel Here column.  Most of the stickers I’ve been and will be showcasing in this column are part of a new collection I started just a couple months ago, as I haven’t actively collected stickers since I was a wee lad 20 years ago.  There are a few exceptions to this though, and these following stickers are the first.  I came across these sticker cards about ten years ago while flipping though a humongous non-sports card collection at my local comic shop, the now sadly defunct Dark Adventure Comics.  The collection was left over after the current owner bought out all the store stock from the previous owner and the new guy didn’t really care for cards outside of the CCG market (like Magic the Gathering and stuff.)

So whenever I had a day off of work I’d spend a good three or four hours pouring over the thousands of cards looking for some hidden gold.  One of the cooler finds were these 21 Jump Street sticker cards from Topps.  At the time I wasn’t really familiar with the various franchises that Topps did card and sticker sets for and I just couldn’t believe that they took the time to put out an entire set of sticker cards from a weird show like 21 Jump Street.  I guess I just didn’t realize how popular the show was.

Anyway I picked though the sticker cards and pulled out all the ones I thought were cool, namely all the Johnny Depp (Officer Tom Hanson) and Peter DeLuise (Officer Doug Penhall) cards, and a few Dustin Nguyen’s (Officer Harry Truman Loki) for good measure.  They ended up at the bottom of a stack of various cards that I kept in a lunchbox for the next 10 years until I decided to start this column.  So here is my small collection of 21 Jump Street sticker cards for your enjoyment… 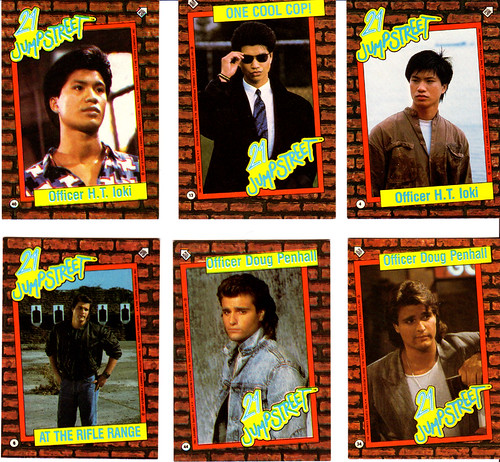 These sticker cards are actually pretty piss poor in the quality department.  First off none of the cards are die-cut (as is typically the fashion with Topps sticker card sets) and half of the images are blurry.  The fact that they aren’t die-cut is pretty funny to me because of the little Peel Here logo arrow on the corner of the card (the name sake of this column), which is part of the sticker in this case.  Typically Topps has the Peel Here logo outside of the sticker’s image area, but they just got really lazy with this set. 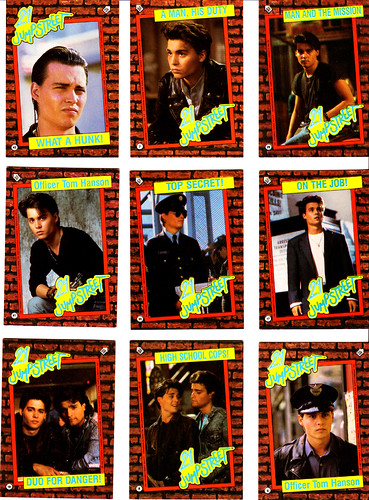 Now the majority of the cards in the set (there were 44 all total) are graced with the arguably the most popular actor and character in the show, Johnny Depp as Officer Tom Hanson.  17 of the 44 cards in the set were dedicated to now super star drunk pirate with another 6 featuring Depp and another actor.  For a star heat throb in the 80s this was pretty impressive, I mean I sure as heck don’t remember Ricky Schroder having a set of sticker cards.  Michael Jackson did though, which puts Johnny Depp’s popularity into perspective, more popular than Ricky Schroder, but not quite as hot as Michael Jackson who only had to share the spotlight in his sticker card set with a tiger and a few llamas.  I think my favorite of the cards above is the sweet “What a Hunk!” sticker.  That is some amazing gel usage if I’ve ever seen it.  Where in the hell was he going undercover with hair like that?  Mafia High School?

Anyway, in true Topps fashion there were two separate types of card-backs, ones with trivia and ones with puzzle pieces.  Below is an example of both, as well as the “What your completed puzzle will look like” card back. 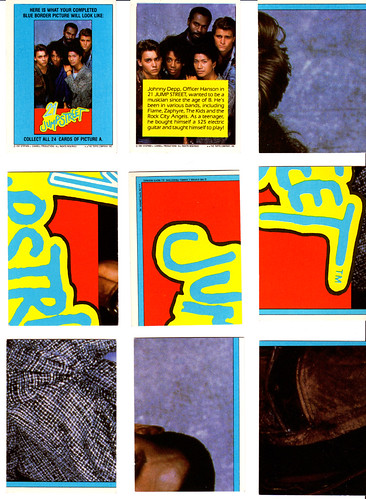 It took 24 cards to complete the puzzle, so it was actually pretty big.  I’m not all that familiar with Topps sticker card puzzles, but from what I’ve seen in the Garbage Pail Kids sets there are usually only 9 cards needed to complete the puzzle.  I was never quite sure what you were supposed to do with the completed puzzle though.  I guess you could tape them to a piece of poster board or something.

Just for the hell of it here’s some pointless 21 Jump Street Trivia:

-Jump Street was one of Fox’s first big hits and it lead off the Sunday night line-up, a spot that the Simpson’s took over and has held ever since.

-Richard Grieco (Officer Dennis Booker) was actually as popular if not more than Johnny Depp on the series, even garnering a spin-off series that lasted for one season.  Currently Richard Grieco isn’t buying any islands, so I think Johnny Depp has beat him in the popularity polls of late.

Next week on Peel Here I’ll be taking a look at a another set of sticker cards, one that I had a few of as a kid and featured a bunch of dorks in tights.

Getting Bonier on Day 22 of the GPK Halloween Countdown!

Halloween Mask Madness, Day 17: Before Leatherface there was Ed Gein…