So I changed my mind about what to post for this week’s Peel Here. Actually I was way too lazy to scan a bunch of Johnny Depp stickers because I spent the evening scanning in pages from an art project I was lucky enough to take part in called simple enough “The Sketchbook Project” headed up by a very inventive 13shadesofblack in the Deviant Art community. If you want to take a gander at what’s been added to the book so far go ahead, though it might not stay up for long. Anyway, because of this and because I didn’t have it at the time of the first Peel Here column, I present to you today another awesome 80’s Antioch Press story book with stickers for the highly underrated flick Ghostbusters II.  Do people hate this because it’s a sequel to a great movie, because it wasn’t Batman, or because Dan Akroyd started gaining weight around this time?  Maybe it’s because of Peter MacNicol’s somewhat annoying protrayal of Janosz Poha and his “Drippings withs goo…” accent that scarred everyone away from the theatre.  I don’t know because I saw it and loved it.  It’s got dancing toasters, rivers of slime, an NES turbo controller hooked up to the animated Statue of Liberty, and most importantly Venkman as an awesome host of a TV show I know I’d watch, not to mention a birthday party of kids anachronisticly shouting “We Want He-Man” at dancing Ghostbusters two years after the pathetic decline of He-Man’s popularity.  What more do people want?

Anyway, I’ve been digging into internets doing research on the Antioch Press library of sticker storybooks and I’ve unearthed some really cool stuff. I think the only book I had, was the first Ghostbusters book, which is a shame because I think I really would have liked some of the others.  From what I can tell Antioch released about 20-25 books from around 1981-1990 that were all done in the same format, small 6″x6″ books with a plate of 12 stickers glued to the inside front cover.  I won’t mention the ones I’ve managed to procure yet, but some of the licenses ranged from the WWF (mostly Hulk Hogan related, in particular an awesome book where Hogan reviews his fellow wrestlers), the Bigfoot monster truck, a whole slew of Garfield and Friends books, and a couple of rare Ghostbusters companion books, one a making of and the other is sort of a training manual.  There were also a couple of very basic books that centered on stuff like sports cars, horses and submarines.  You can always tell an Antioch sticker book by the big white circle with a rainbow in it proclaiming it’s 12 sticker goodness contents. 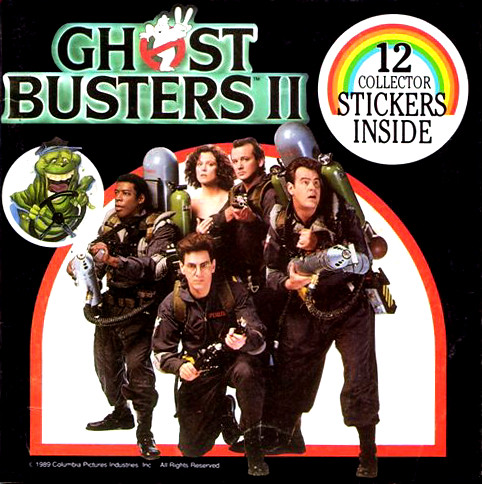 Though I didn’t care for the picture cover of the first book, when taken into context with this second book I’m glad that the layout and design crew stuck with the same format in terms of the red half circle and a group shot.  The movies were like five years apart and it’s surprising to see them sticking to a design like this.

As far as the stickers themselves are concerned, I really dig this set a bit more than the first set, for one because Ernie Hudson secured a spot on a sticker, and second because they used some of the book production art from the inside front cover on a sticker which is what I wanted for the first set of stickers.  I also dig the grotesque close-up of the scourge of Carpathia himself Vigo. It gave me chills as a kid in the theatre to here Wilhelm von Homburg spout, “On a mountain of skulls, in the castle of pain, I sat on a throne of blood!”  Chills I tell you.  Though it could have been the weird spell of motion sickness I used to get in theatres around the late eighties, but I’m sticking with scare chills. 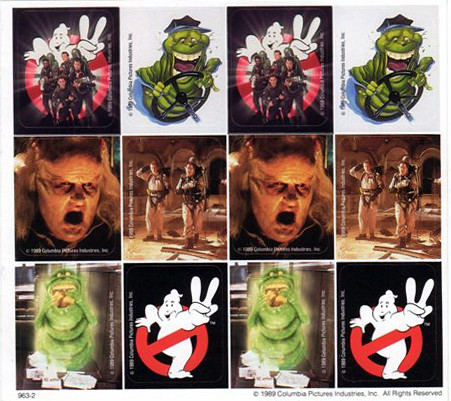 I think I may only have one more of these books, but it’s a dozy in nostalgia terms, so that’ll be fun when I get to it.  Okay, so I’m heading down to Florida tomorrow morning for a vacation with the family unit, but I’ll be back next Thursday with more inane 80’s nostalgia fun, and hopefully I’ll actually get to scanning some sweet, sweet Johnny Depp sticker goodness.

Tiny car realization and a CONTEST!