Talking about Transformers, I just recently stumbled upon a new line of toys from Hasbro that I have just fallen in love with.

Before I get to that, let me preface this by saying that I loved me some Transformers when I was a kid, but I never had that many. At least it felt like that at the time. I guess I had my fare share, though most of them were either the small figures like Cliffjumper, Warpath, and Brawn, or the slightly larger figures that would combine to form a larger robot like the Technobots (which formed Computron.) I had a few of the regular sized figures, though I got most of these through trading with the exceptions of Sideswipe and Ironhide.

Since there were like six hundred thousand other figures I wanted in the toy line it quickly became a product that I coveted and obsessed over. Later in high school when I had a little bit of my own spending money I splurged a little on some of the Generation 2 repaints (I was so happy to get a complete Devastator I tell you what) but I was very unhappy with the paint schemes (too neon and gaudy, I mean who wants a set of multicolored Dinobots anyway?) Then Beast Wars came out and totally ruined my hunger for Transformers. I just wasn’t into the animal/robot thing, with the exception of the Insecticons and Dinobots, which were a lot cooler and just don’t count since they’re G1.

For years after that I kept hoping that Hasbro would just go back to making vehicle oriented Transformers, but it never happened, at least not to my liking. When Armada came out a few years ago I was excited until I actually watched the cartoon and wanted to strangle myself to make it stop. I just haven’t liked the direction the toys have gone in. Even when the Alternators came out a couple years ago I wasn’t all that jazzed because by that time I just wanted the original toys to be re-released (which did happen, and still is, Soundwave comes out in December as a Toys ‘r’ Us exclusive, but even those were hampered by the prohibitive $40 price point.) I got a temporary reprieve when the re-issues were marked down to $5, a price I was more than happy to pay, though a lot of the cooler figures were gone by then (no Starscream for me.)

Well, last month when I was out at Target just browsing the toy aisles at lunch I noticed a peculiar set of TF packaging amongst the rest of the toys. They’re called TF Classics, and I am in love with pretty much every single figure I’ve seen. Now I’m far from a fanatic when it comes to toys. I know pretty much when new stuff comes out and I’m more familiar with the toy aisle at most stores that say a birthday gift hunting mom or your basic store clerk, but I couldn’t tell you the difference between an Armada figure vs. an Energon figure to save my life. I’m just not that into it anymore. I guess my nerdy fandom is a lot more general these days.

Anyway, I loves me some Transformers Classics and here’s why. For my money they are the perfect blend of classic G1 characters and updated designs that don’t make the figure seem different enough to warrant a different name (like Armada Sideswipe.) Now I understand that, for example, not every fan wants his Sideswipe to be a red Lamborghini or some such thing, but I do and that’s just all there is to it. With the Classics line Hasbro has re-imagined the characters so that they pretty much resemble their G1 counter parts, but are just a little more modern. What struck me first was how character accurate the head molds were. Take Bumble Bee for instance, his head on the original toy was a small flat-ish alien looking head glued to a flat piece of plastic that looked nothing like he did on the show. The Classics figure does it’s best to represent the original cartoon design. Here’s the comparison: 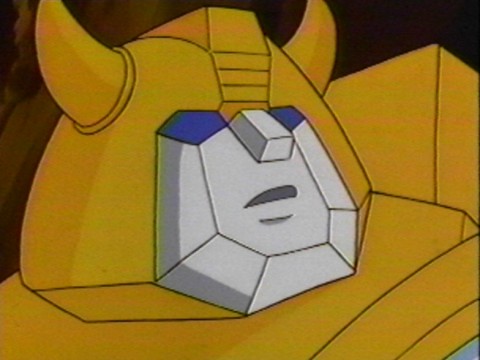 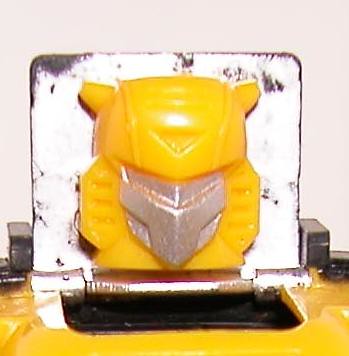 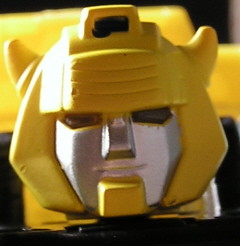 I think this is pretty freaking awesome. If nothing else, for once it shows that the designers had the original fans at heart, even if his vehicle mode isn’t a VW Beetle. I’ve read that this toy line is sort of tied into the 20th anniversary release of the Transformers movies on DVD, reviewed below, so that makes a lot of sense. As far as re-imagining the vehicles and robot mode body styling and stuff, the designers haven’t strayed too far, at least not far enough that the character isn’t recognizable or anything (they’ve kept the feel of the personality of the characters) and honestly some of the figures in the line are better than others, but overall it’s exactly what I’ve wanted out of a new Transformers toy line for the last 15 years.

The designers have even gone so far as to make the Classics Megatron a gun again (which I think it the first time since the original toy came out.) I will say that he is the worst off in the new line of toys though, with a hideous Nerf color scheme and design that makes me cringe. I realize that they probably couldn’t make him look too much like a real gun, but did they have to mold him out of green (not visible in the pictures below, but it’s there trust me) and purple plastic? There is an awesome custom repaint of the figure floating around on ebay though that illustrates that the mold really isn’t the problem, it’s the butt ugly color scheme. Kudos to the guy who did the repaint, it’s freaking fantastic. 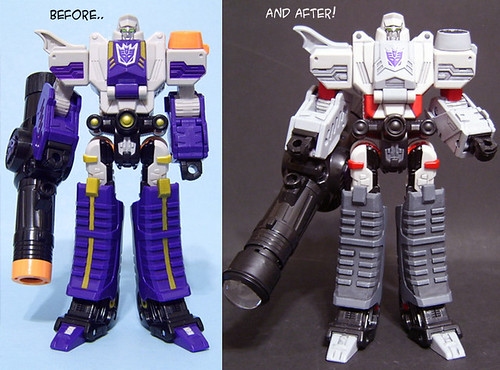 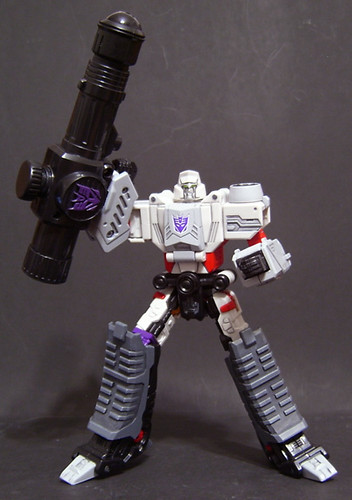 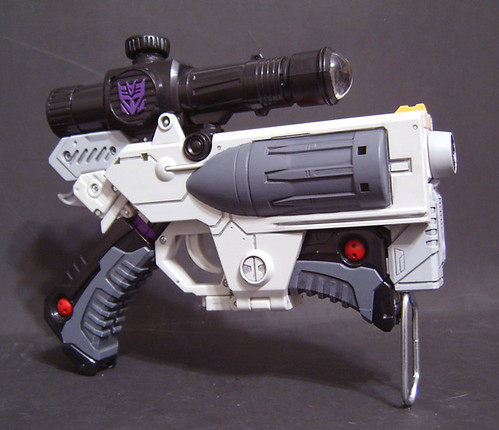 So far there are 13 or so figures in the line, 8 of which are available now in stores. Tformers.com has an awesome database of the overall line. The figures so far are Optimus Prime, Megatron, Ultra Magnus, Rodimus (actually Hot Rod, but oh well, what’s in a name anyway), Bumblebee, Cliffjumper, Grimlock, Mirage, Starscream, Ramjet, Skywarp, Astrotrain, The Constructicons, and my personal favorite Jetfire. Nala over at Plastic Crack has a great review of Jetfire up with some pictures that he took that would put mine to shame.

Jetfire is the only figure that I’ve purchased so far, and I got to say that I love him to death. I had a tenth generation hand-me-down G1 Jetfire for a while that I loved literally to pieces. He started out with a broken shoulder, and just continued to fall apart from there. I remember wanting him back so badly in high school when I finally discovered the Robotech cartoon. The new Classics version is pretty freaking badass and has pretty much everything I’d ever want out of a Transformer. He comes with a battle helmet (and we all know how much I love figures with removable helmets), has an overall look that is pretty much reminiscent of the original without being a blatant Valkyrie rip-off (including super mode red booster jet pack), and is pretty amazingly pose-able for a Transformer toy. There are a ton of working parts and it’s been designed so that everything fits real well together and won’t wear out (unlike the original.)

The price point on the figures isn’t that bad either with the normal figures at $10, and the deluxe figures at $20. I’ve put ’em on my Christmas wish lists, so here’s hoping they are deposited under my tree in 26 days.

Oh, I almost forgot to mention that this line also brought back the heat sensitive Autobot and Decepticon logo stickers, fan-freaking-tastic!

It was finally time to up my watch game…