I would have waited an eternity for this…DVD review…

I’ve been meaning to review the new Transformers: the Movie 20th Anniversary 2-Disc Special Edition DVD set for a few weeks now, but I was sidetracked by the opportunity to pick up a complimentary copy of the DVD.  When the copy never materialized, I grumbled a lot, got off my butt and finally bought a copy for myself.  So now, weeks late, here are my thoughts on this new version of the DVD.

First off, I’d like to mention that Transformers: the Movie is probably my favorite film of all time and I’ll be honest, 93% of the reason why is based solely on nostalgia.  I was lucky enough to see this in the theater as a kid during its very uneventful 5-week theatrical run in August of 1986.  I think the film grossed somewhere in the neighborhood of 6 million give or take a couple hundred thousand dollars, and even though that sounds like a lot, it’s not, probably not quite as much as it cost to make.  It did earn double the gross of my second favorite movie of all time though, The Monster Squad, which opened during the same weekend the following year.  Lesson learned, do not open a kid’s action film in the second week of August, or it’ll be doomed to failure and possibly only have a niche cult following that’s still obsessed with the film 20 years later.

Transformers: the Movie was one of two animated feature films that were released in 1986 by DEG/Marvel/Sunbow entertainment, the other being G.I. Joe: the Movie.  Both films had very similar plots (both written by Ron Friedman a series writer for the G.I. Joe cartoon), both served as a re-launch of the cartoon franchises, and both featured controversial major character death scenes that caused a minor blip on the radar of concerned parents everywhere.  They also both featured a fair amount of big named actors doing voice-work (Transformers has Judd Nelson, Eric Idle, Robert Stack, Leonard Nimoy, and freaking Orson Welles, whereas G.I. Joe has Don Johnson and Sgt. Slaughter.)  What sets Transformers apart is that it was released first which meant that it actually got into theatres un-edited whereas G.I. Joe didn’t fare so well (it was rushed to TV instead as a five part mini series with a new ending to ‘fix’ the original character death scene.)

I’ve always had a weird relationship with home video releases of this film for one reason or another.  I rented the living hell out of a copy at our local Video Stop when I was a kid until one day when someone didn’t return it and I had to wait until it was released for public purchase (as opposed to the Video Rental copies that cost like $100 per movie.)  When Rhino Home Video finally released it in the 90s the film was edited to remove a curse word (Spike says ‘shit’ when he and Bumble Bee fail to blow up Unicron) and all copies I tried to view would always ‘roll’ on the screen when I watched them.  Hey, who here remembers videotapes rolling (where the picture would appear to continuously move up off screen then come up from the bottom of the screen?)  I was so desperate to get a good copy of the flick that I traded my entire collection of Magic the Gathering cards at a comic convention one year for a bootleg (I was broke and bootlegs used to be amazing and rare.) 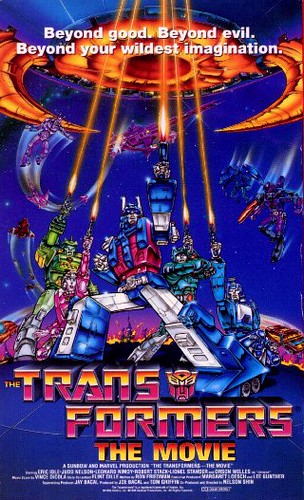 Then a few years ago Rhino finally released the film again, this time on DVD, with the famous (well in my circle) curse word edited back in, though it was a pretty bare bones ‘special edition’ that only contained an interview with Vince DiCola, the guy who did all of the non-rock incidental music for the film.  This was the best version of the film released at the time and I assumed it would be the only version as well, even after it went out of print when Rhino gave up the rights to distribute Transformers on DVD.

Well somehow, by some odd set of circumstances, Steven Spielberg and Michael Bay decided to team-up on a live action summer blockbuster re-imagining of the Transformers for 2007.  I’ll be honest, the best thing to come out of this new flick debacle of a movie is the re-release of the original film on DVD.  I mean the freaking characters look like bad CG robot insects (Scorpinok of course gets a free ride here) and some of the vehicle modes are way off base.  Bumble Bee is supposed to be a VW Bug, not a muscle car.  They could of at least made him a Mini or something.  Anyway…

I have to say, outside of not including the original cover art (see above picture) that I am pretty partial too, this is the best this film has ever looked (will probably ever look) and it’s accompanied by the best set of extras that pretty much anyone could hope for.  The cover art isn’t all that bad.  There are two separate covers for the flick that are printed on both sides of the insert so you can choose the version that you like the best, either with the original generation 1 characters: 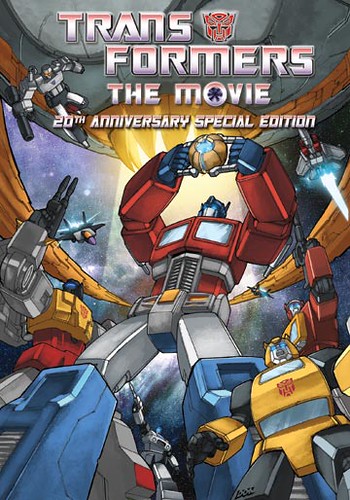 or with the newer revamp characters that are introduced in the movie: 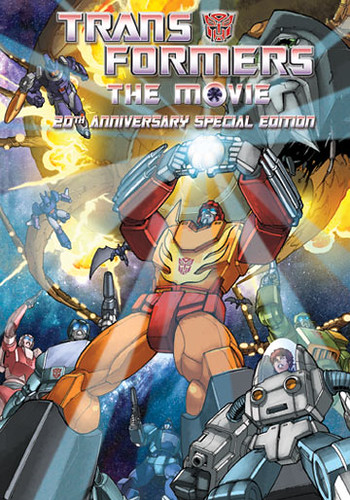 When you consider that the original cover featured Ultra Magnus, it sort of makes a nice triptych of images with all the Autobot leaders featured.  The DVD was also packaged with a special lenticular insert that lets you flip between the two images and is very reminiscent of the old stickers that I wrote about earlier in the week.  The other thing that I really like about the DVD is the artwork on the discs themselves and granted it’s a bit superficial, but it does illustrate that whoever worked on the packaging had the fans at heart.  The discs creatively display both Unicron and the Matrix, utilizing the hole in the center of the disc.  The pictures I swiped from the official DVD release site make them out to be a little cooler than they really are: 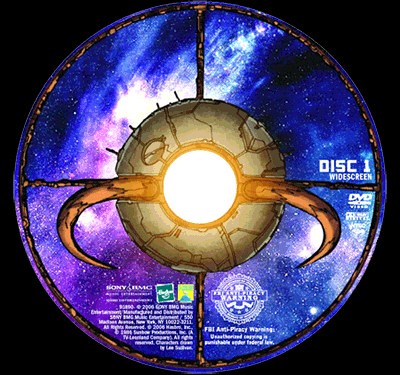 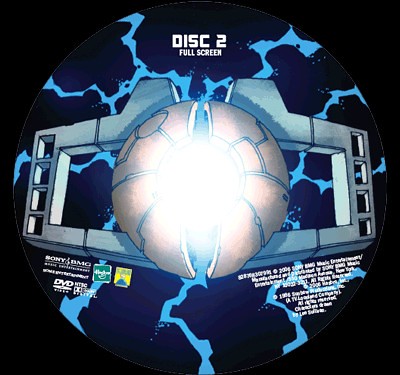 I don’t know about anyone else, but my discs don’t glow in the middle.  Which makes me wonder why no one has ever released DVDs with glow in the dark artwork on them.

Anyway, the actual film has been cleaned-up and the brightness of the color in the animation restored for the first time since it was theatrically released.  Sony has also provided two versions of the film, both widescreen and full screen, which for this film is particularly important as the widescreen version (that was seen in theatres) is actually a cropped version of the film to attain the widescreen ratio.  The full screen version that has been previously released on home video actually has the complete image that was intended for view by the animators (there is a version of the film floating around that was restored from either a test copy of the film or the original animation that has an even larger visible image area, but it’s all page runoff stuff that was never intended for view.)  So for the first time in 20 years the film can be watched either as it was intended or as it was shown in theatres, which is pretty cool.

The DVD also features commentary by Nelson Shin, the director (which I haven’t listened to yet, but could be interesting or it could be worse than Warwick Davis’ commentary on Willow), as well as both a fan commentary and a ‘pop-up video-esque’ trivia feature, that probably has nothing new as far as info for hardcore fans, but is fun to have none the less.  There’s also a slew of promo material like trailers, TV spots, animatics, and test footage as well as a few toy commercials from both the US and Japan.  There’s also an episode from a Japan only Transformers spin-off, Scramble City with optional commentary.

Pretty much this DVD set has everything (outside of the music videos for a couple of the songs in the film) that a Transformers fan could every want out of a DVD release.  There’s even a short bit announcing Sony’s plans to re-release the original TV show on DVD for next year, which is awesome as it’s been out of print for a few years, not to mention insanely priced (even when it first came out on DVD.)

Even if you already have the Rhino version of this DVD, I think it’s well worth the $15 asking price.  It’s funny that Sony would go through all the trouble to clean this flick up for a nice special edition when George Lucas can’t get off his ass to put out nice versions of the Original Trilogy to save his life.

Return of the 31 Days of Monsters, Day 21: Beware the rock demon Thons!