Peel Here #2: Lenticular Goodness that you can see from two angles!

I’m still working on more or less a good solid month’s worth of themed blog entries, but some of the items I’ve won on Ebay aren’t arriving quick enough.  Anyway, in the interim there will be plenty of other goodness.

So here is column number 2 in the weekly series I’ve begun called Peel Here, which of course is all about stickers from the 80’s.  This week’s entry, as promised, is all about lenticular printing and the awesome stickers that are derived from it.  What is lenticular printing you ask?  Well there is a great entry on it in the Wikipedia.  Basically it’s when two images are broken up into vertical laths and are arranged at different angles, so that when you look at them from different angles they appear to be one image or the other (and sometimes a mixture of both.) I n the 1600’s painters were using this process, cutting up their paintings and arranging them to fake a 3-D effect with the images.

Nowadays we print these type of images on prisms so moving the prism makes the image appear to change or move.  This was freaking huge in the 80’s, especially with kid’s novelty sneakers that had cartoon characters on them, so when a kid was walking the image would flicker and change.  It was also used in printing stickers, most prominently in one particular line, the Transformers, for what I would hope would be obvious reasons.  I’m not sure exactly what these types of stickers were called because until I did some research I had never heard of ‘Lenticular’ before.  I think we called them flicker stickers, though I’ve now seen ‘switchable’, ‘changeable’, and ‘prism stickers’ on different sites and packages.

Well today’s first set of lenticular stickers come from a Transformers sticker book set.  I’ve yet to actually find a copy of this book, but apparently you purchased it separate from the stickers then you’d try and collect 4 different sticker sets to complete the book.   I picked this set of stickers up on Ebay because it had a Sideswipe sticker, and he was always my favorite Transformer (I mean he’s a freaking toy, a robot, and a Lamborghini, that’s like the king of 80’s boy triumvirates.) 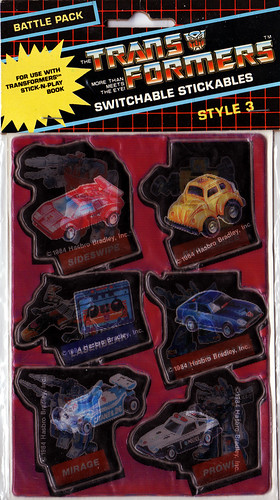 What I think is really cool about these stickers is that the images are based on the toys and not the cartoon art.  I think a lot of the original Transformers merchandise was like this.  So it’s kind of weird to see Bumble Bee with his flat alien looking head instead of the one with the yellow horns.

Up next we have one of my recent nostalgia holy grails, the 7-Eleven rock sticker coin set, but in particular the Dio coin. 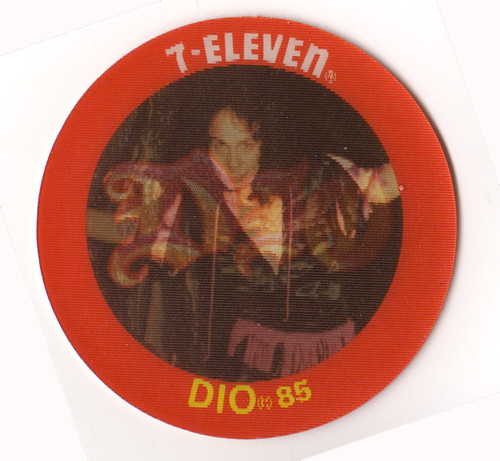 I think I talked about these in my 7-Eleven podcast.  These were Slurpee premiums that were hidden in false bottoms of the frozen drink cups in 1985.   Around the same time there were also baseball star versions as well, but it’s the rock ones that I remember the most.  I really remember wanting very badly to get a Rick Springfield so that I could give it to my sister (she was pretty big into him at the time) but all I could get were lousy Billy Squier and Dio coins.  A few months ago, when I was trying to pick the image of the coins out of my memory I could have sworn that the Dio coin changed between images of him standing calmly and of one where he was throwing the goat, but alas as the coin shows there were no devil horns to be found.  What a wasted opportunity on the 7-Eleven premium department.

Anyway, I was so glad to finally find these and to know that I wasn’t crazy and that these did in fact exist.   Not only that, but they are freaking stickers to boot!  I’ve got the entire set, and sadly there is no Rick Springfield to be found, but there is a pretty sweet Huey Lewis and the News one as well as a pretty nifty Ozzy Osbourne one.   Here’s the set: 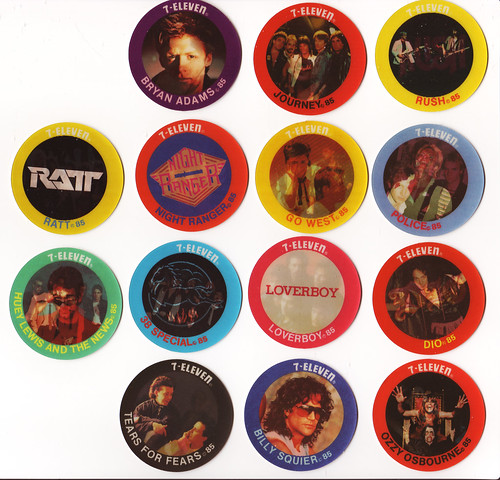 It’s pretty cool to know that someone out there was obsessed enough with these to either steal a stack of cups, or to drink enough Slurpees to do permanent brain-freeze damage to themselves in order to score a complete set and save them for 21 years.   Now they’re on the internet so that everyone else who loved them can at least have a picture of them all these years later.

Next week on Peel Here we find out that before Johnny Depp was a half drunk pirate heartthrob, he was in fact a fully sober heartthrob that was immortalized on a sticker.

Peel Here #40, the most powerful stickers in the universe!