Happy Halloween folks! I’ve been on vacation for the last two weeks, so I’ve been a slug in terms of posting and such. I figured I’d slab up an onslaught of stuff today, the big day. I’ll be honest; I’m kind of psyched because for the first time in 10 years it’s looking like we might actually get some Trick or Treat-ers at the door. Our apartment complex is really pushing it this year and who knows I might be able to participate in that end of the holiday again (as a giver not a getter.)

Anyway, here’s the first a few bits of Halloween-y stuff I picked up this year. I bought this piece of talking plastic at Party City for a buck. 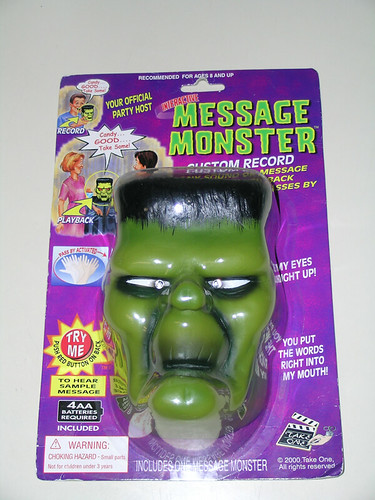 I was pretty skeptical at first as it sounded a little too good to be true. A decently sculpted Frankenstein’s Monster head (not cutesy at all) that has the ability to record a spoken message, and then to spit it back out every time someone walks by it sounds like it should cost more than a dollar. My guess it that the batteries have died and since no one can test it out anymore they weren’t selling.

Well I bought it, ripped it out of the package, slapped some fresh copper tops in it and tested it out. To my dismay. Apparently it costs a dollar for other more important reasons. The Franky head can record voices just fine, and he’ll even spit them back once when you flip the switch to “On�?, but it gets pretty sketchy after that. Apparently the sensor doesn’t work worth a crap. At the end of the day, I’m glad I only paid a buck for it, but I kind of regret that I didn’t get to use it to its full potential to really annoy the crap out of my fiancée. Oh well.